Two decades after the attacks of 9/11, preventing and countering terrorism continues to be one of the main challenges faced by policy makers. The threat of nuclear terrorism, however, is often dismissed as unlikely or not imminent. The mere circumstance that it seems unthinkable does not mean it should not be actively prevented. In fact, there are both examples of threats and feasible pathways to conduct nuclear terrorism. Therefore, countering it can no longer be met with ignorance or negligence.

This year marks the 20th anniversary of the 9/11 attacks that reshaped how Western governments thought about security and terrorism. Measured by the number of causalities, they remain among the most severe terrorist events that have ever occurred. Yet, that day, the threshold to another, even more devastating form of attack was alarmingly low: According to the 9/11 Commission Report, although the perpetrators chose more feasible and symbolic targets in the end, they had considered targeting the Indian Point Energy Center – a nuclear power plant 40 kilometers north of Manhattan – to create a massive release of radioactivity.

While the human and environmental consequences of a terrorist attack with nuclear or radiological materials are barely imaginable, the threat of nuclear terrorism is real. Several terrorist groups – including Al Qaeda, North Caucasian terrorists, and the so-called Islamic State (IS) – have demonstrated their nuclear ambitions as a means of communicating with and targeting their “enemies.” Al Qaeda generally targets “the West”; North Caucasian terrorists have chosen Russia as a less abstract enemy. As a more recent example, the perpetrators of the 2015 attacks in Paris gathered information about nuclear research facilities in Belgium and Germany. Generally, European countries that engage in international counterterrorism campaigns and operate nuclear power or research programs, such as France and Germany, present high-risk targets for potential nuclear terrorist attacks.

Assessing the Feasibility of Nuclear Terrorism

There is more than one way to cause terror with radioactivity. Nuclear terrorism can take at least four forms: detonation of an intact nuclear weapon, an improvised nuclear device, a radiation-dispersal device or “dirty bomb”; or the release of radioactivity.

The first is relatively unlikely as terrorist groups face tremendous obstacles to obtaining a functioning nuclear weapon. Even with the possibility of so-called insider threats – terrorists receiving help from a sympathetic employee – trespassing into a relevant military facility to acquire an operational nuclear weapon is extremely difficult. Stealing components to construct a functioning nuclear weapon is also improbable as that requires professional expertise and equipment. Therefore, and because civilian facilities and their staff present easier targets, the other three categories are more feasible forms of nuclear terrorism.

Creating the second option, an improvised nuclear device, requires fissile material. To obtain it, perpetrators would need to either break into protected facilities – such as nuclear power plants and related facilities that handle, store, or transport nuclear fuel – or acquire it through other criminal means such as black-market networks. While fabricating a device that employs fissile material to cause a nuclear explosion is technically sophisticated, it is feasible.

The term “dirty bomb” in the third option refers to a device whose primary purpose is to spread dangerous levels of radiation. Combining conventional explosives with radioactive material, dirty bombs are relatively unsophisticated when compared to those used for targeted nuclear explosions. Consequently, there is a broader range of potential sources for the radiological materials used in them: Some medical and research facilities handle materials with lower levels of radioactivity; nuclear power generation creates materials of intermediate and high levels of radioactivity. If a dirty bomb used high-level radioactive waste, for example, it could disperse high levels of radiation. Perpetrators could acquire such radiological materials through physical breach and theft, insider support, or black-market networks.

The fourth form of nuclear terrorism aims to disperse radioactivity even more indiscriminately – with no explosive devices required. Instead of opting for detonation, perpetrators could attack a facility handling nuclear or radiological materials in order to disrupt, sabotage, or manipulate its operations, resulting in the release of radioactivity.

According to nuclear policy experts, knowledge on how to build explosive devices or release radioactivity is relatively freely available. Therefore, the only effective prevention strategy involves making it harder for terrorists and malicious actors to obtain nuclear and radiological materials. That, in turn, means strengthening nuclear security, which concerns the protection of fissile and other radioactive materials from illicit access – including the protection of nuclear facilities from illicit breach.

The level of nuclear security worldwide matters to both international and European security. Given the transnational dimensions of crime, terrorism, and other illicit networks, nuclear security incidents and a lack of high standards can pose direct or indirect threats to Europe. Although nuclear security is one of the key principles in the international nuclear policy field, the relevant recommendations and regulations are patchwork and largely non-binding. The upcoming review conference of the Convention on the Physical Protection of Nuclear Material (CPPNM) and the CPPNM Amendment in late March 2022 presents an opportunity to fill the gaps and strengthen the global nuclear security regime.

Responsibility for implementing international and national regulatory frameworks for nuclear security lies entirely with the respective state actors. The International Atomic Energy Agency (IAEA) does not have the mandate to offer more than advice. The IAEA joins other actors, including those from civil society, in bringing national, public, and private stakeholders together to share best practices and cooperate on research. Ultimately, though, the degree to which states invest in legal and technical implementation, as well as research and improvements, is primarily a question of political will.

Efforts to strengthen nuclear security and prevent nuclear terrorism have significantly decreased in recent years, correlating with the negligence of the topic by the administration of US President Donald Trump. Previously, Trump’s predecessor, Barack Obama, had named nuclear terrorism as one of the greatest threats to international security and convened four dedicated Nuclear Security Summits between 2010 and 2016. Such high-level engagement helped to raise awareness, at least temporarily, and convey the importance of nuclear security, which was best illustrated by the CPPNM Amendment entering into force in 2016 after its adoption in 2005.

The international architecture to counter and prevent terrorism is likewise partially impaired by states such as Russia, which hold crucial seats and misuse counterterrorism structures to pursue their own geostrategic and geopolitical agendas. Expert groups and special committees in international institutions do concentrate on the threat of nuclear terrorism. But if the participating states do not agree on the basic principles of counterterrorism – for example, on strengthening civil society participation as a crucial pillar – one can only surmise the attention they give to a seemingly distant and controversial threat like nuclear terrorism.

Taking the Threat of Nuclear Terrorism Seriously for a Safer Future

Yet, the threat of nuclear terrorism is neither distant nor theoretical in the current security landscape that is defined by intensifying geopolitical conflicts, regional instabilities, and diminishing nuclear security efforts worldwide. Simultaneously, interest in and the development of nuclear and radiological technologies for energy production or other applications is increasing around the globe and could potentially heighten the feasibility and, thereby, the threat of nuclear terrorism.

And nuclear terrorism is already a transnational threat. High-level radioactive material stolen from one place can end up in a dirty bomb in another. Even those states that do not engage in international counterterrorism campaigns or possess radioactive materials can be targeted or affected by nuclear terrorism. To make things worse, the devastating consequences of nuclear terrorism and spreading radioactivity do not “respect” national borders. Accordingly, national and international efforts and investments into nuclear security are needed – regardless of respective national interests, for example those concerned with nuclear technologies or other geopolitical conflicts.

Awareness of the threat of nuclear terrorism and its plausibility is only a first – albeit much-needed – step in the right direction to prevent it. Terrorist groups and other malevolent actors should not be given an opportunity to bring their capabilities and resolve to fruition. 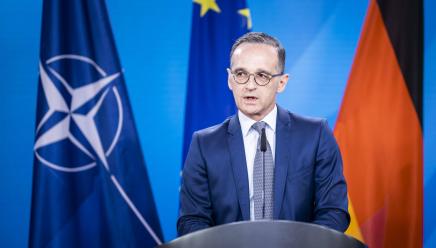