Tailoring a multilateral approach to the Eastern Partnership

Recent developments in the Eastern Partnership region reiterate the diversity of paths that these countries undertook to strengthen their sovereignty, and their relations with neighbouring countries, including with the EU. The EU ought to change its approach towards the region accordingly.

This text is part of a larger report by Clingendael. You can download the pdf here.

The multilateral component of the Eastern Partnership (EaP) that brings the six eastern partners under one institutional framework with the EU member states strengthens their leverage vis-a-vis Brussels and other European capitals, improves their visibility, and can lead to the creation of additional tools to face common challenges in Europe such as energy security, and environmental and climate resilience. But more recent developments in the region once again reiterate the diversity of paths that these countries undertook to strengthen their sovereignty, and their relations with neighbouring countries, including with the EU. A more tailored approach to addressing the challenges and needs of these countries would better prepare the EU to respond to current and future crises as well as to undertake new opportunities in the region that arise as a result.

Advantages of a multilateral approach

The multilateral framework of the Eastern Partnership policy brings definite advantages to both the EU and the Eastern partner countries. The framework helps keep the region on the EU agenda, and it increases the leverage over policy making in Brussels of those countries that seek closer ties with the EU but are unable to do so on an individual basis. For small countries like Armenia, Georgia or Moldova, bilateral relations are not an option if they want to maximise their presence and extract more benefits from Brussels. Only a multilateral framework can give them more prominence on the EU agenda.

This is particularly important now, when the EU’s focus lies elsewhere such as fixing the transatlantic relationship or addressing the medium and long-term socioeconomic consequences of the Covid-19 pandemic within the European community itself. It also helps the EU formulate a coordinated approach towards its immediate eastern neighbourhood – a region of primary strategic interest for the EU’s stability and security at its borders.

Moreover, both EU member states and eastern partner countries increasingly face challenges that require a concerted effort to overcome. A regional approach to addressing challenges such as Covid-19 economic recovery, connectivity and security in the Black Sea Basin, and the need to strengthen environmental and climate resilience, to name but a few, would benefit both the EU and its eastern partners. These challenges also come more to the forefront of shaping the security and economic environment of the partner countries’ future development trajectories. These can be overcome more effectively when they are tackled multilaterally through common strategic approaches and combined efforts. The EU, for instance, could develop a new comprehensive Investment and Economic Recovery Plan to address the impact of the Covid-19 pandemic in the EaP countries, similar to the one developed for the Western Balkan countries.

The case for further differentiation

The EU faces three central challenges in the EaP region over the next decade. The first is helping the fight against corruption and state capture in the six countries. The second is to improve the security environment to help these countries unleash their development potential. And the third is to adapt the EaP to the continent’s environmental needs. A multilateral framework is necessary to tackle these challenges but it is not sufficient to achieve sustainable results. The solutions to such challenges must be tailored to national contexts to maximise their impact.

For instance, to be able to assist the six countries address the environmental challenges that lie ahead, the EU should help address the inherent structural weaknesses of public institutions which are responsible for the implementation and oversight of the green agenda. Most of these countries, in addition, do not have a national strategy for how to strengthen environmental resilience. This is where the EU’s tailored approach would enhance its leverage on both the design of the green agenda priorities in these countries, and shape the future reform progress around them.

Equally important, differentiation is already a reality and is shaped by developments on the ground in the EaP. The Association Agreements, the visa-free regimes and intensified political dialogue already constitute a considerable degree of differentiation. But the more recent developments in the EaP region have exposed the EU’s lack of appropriate instruments to intervene or strong levers to influence developments in particular contexts. The EU’s slow, reactive approach to the region’s multiple crises, such as in Belarus or Nagorno-Karabakh, undermines its credibility and reputation as a strong player in the region. A more tailored, country-specific, differentiated approach would improve the EU’s capacity to act in its eastern neighbourhood.

Moreover, many of the hard-core challenges are domestic and specific to each country – for example, rule of law, fight against corruption, and influence of vested interests on the media environment. Reforms in Moldova, Ukraine and Georgia have reached a point where they bite at the heart of economic and political forces that want to preserve the status quo. Closer ties with the EU means adopting and practising norms and rules that are detrimental to their interests and clientelistic networks. Reformist forces in these countries require new carrots to keep the difficult reform process going, as a result, but they differ from the incentives that Belarus or Azerbaijan would accept. The ultimate carrot for many is the prospect of EU membership. There is no consensus in the EU, however, on the future of EU enlargement. The EU’s multilateral approach, from this perspective, is often perceived by countries seeking closer ties with the EU as a straitjacket that does not respond to aspirations for EU membership. As a result, many reformers worry that the multilateral track will gradually replace a more nuanced differentiation. A further application of a smarter, more tailored, and targeted conditionality would help the EU improve its standing in the region, and speed up reforms.

To ensure that the multilateral track does not limit progress in bilateral EU-EaP country relations the EU needs to deepen cooperation in absolutely key areas for the future of the EaP states. The next logical step for cooperation with countries that seek closer ties with the EU – Ukraine, Georgia and Moldova – should be deeper sector-by-sector economic integration into the EU Single Market. The EU and the three associated EaP countries need to jointly establish a roadmap on their gradual and tailored accession to the four freedoms during the next ten years. Another helpful measure would be the acceptance of the associated EaP states into the Single European Payment System, which is likely to bring benefits for people who travel and do business in EaP and EU countries. Ukraine, Moldova and Georgia are ready for closer integration with the EU in the fields of energy, trade, transport, digital economy, customs and security cooperation.

When it comes to addressing common challenges and crises, the added value of a strengthened multilateral framework is undeniable. It brings benefits both to the EU, which seeks to increase its capacity to shape developments on its eastern borders, and to the eastern partner countries that seek stronger leverage vis-a-vis Brussels. The medium and long-term challenges that the Covid-19 crisis has unleashed could also be tackled more effectively via joint efforts. At the same time, the political and geopolitical developments in the region increasingly require more differentiation for the solutions applied to be sustainable. More differentiation would also give the EU a greater presence and the ability to act promptly via the development of new tools and instruments to intervene, and of strong levers to influence developments in the region.

This text was first published by Clingendael on Januar 15, 2020 here. 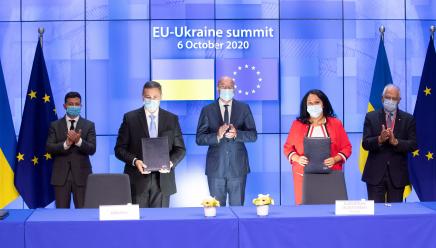