Franco-German Unity on Economic Recovery Weaker than It Appears

The Franco-German compromise on the European recovery fund this May signaled to many in France that a historic compromise on European debt and the role of the state is in reach. So far, however, this compromise only exists between elite circles in both countries. Therefore, the new German government will need to clarify the actions of its predecessor and explain to the public why the recovery fund is essential for the national economy as well as the future of the European Union.

In May 2020, German Chancellor Angela Merkel and French President Emmanuel Macron presented their initiative on a €750 billion European recovery fund, which was set up to counter the economic consequences of the COVID-19 pandemic. French observers could not believe their eyes. Germany had abandoned its traditional positions on common European debt and moved against its “frugal” allies, first and foremost the Netherlands. Many in France interpreted this as a paradigmatic shift in the European debate on the state’s role in the economy. After Brexit and considering the weak position of the remaining member states, which are reluctant to expand the EU’s budget let alone permit it to take on debt, Germany’s decision to side with traditional French positions could have enormous consequences for the EU in the coming years.

French observers also took astonished note of how little resistance the recovery fund met in the German Bundestag, where it was approved by a large majority on March 25, 2021. (The only political party to vote unanimously against the instrument was the far-right Alternative for Germany (AfD).) But this overwhelming approval was not entirely unexpected and confirmed a year-long evolution in the German stance. In 2018, German Finance Minister Olaf Scholz and his French counterpart Bruno Le Maire presented a compromise on a European budget in the wake of the Franco-German summit in Meseberg. More recently, in spring 2020, Germany’s infamous debt break was suspended by the Bundestag, paving the way for massive stimulus packages to counter the consequences of the coronavirus crisis.

Amid the first payments from the recovery fund to EU member states, support for the instrument remains strong among German elites. Many economists share Le Maire’s view that the fund is essential for the EU to stand its ground in an increasingly competitive and bipolar world economy. Marcel Fratzscher, president of the German Institute for Economic Research (DIW), is one of the most prominent advocates of this position. Another is Scholz himself, now leading the charge on the chancellery after his Social Democratic Party (SPD) narrowly won the most votes in Germany’s elections on September 26. Scholz called the Franco-German compromise on the fund a “Hamiltonian moment,” an unambiguous hint at a fiscal union to come.

Implicit Expectations on the Fund’s Consolidation

Yet, current appearances of unanimity might be deceptive. Questions as to whether the fund will remain a temporary instrument are likely to resurface during the coalition negotiations. The German Bundesbank pointed out that the fund’s award criteria (population size, size of per capita GDP, and unemployment rates between 2015 and 2019) do not fit the claims that the instrument helps to counter the economic consequences of the pandemic. EU transfers will be primarily disbursed to states that have struggled to consolidate their finances since the eurozone crisis. Italy (€65 billion), Spain (€59 billion), and France (€37 billion) are the biggest receivers; Germany, while receiving €26 billion, will shoulder the biggest net contribution with €66 billion.

Consequently, some critics have called the instrument a concealed cohesion fund and have questioned its constitutionality. Auditors from Germany’s Bundesrechnungshof warned that German tax payers will be liable for risks associated with grants and loans distributed to other member states long into the future – far beyond the exceptional pandemic situation. This would effectively imply common European debt, something that Chancellor Merkel and others have repeatedly excluded in the past. Accordingly, a group of parliamentarians from her party, the Christian Democratic Union (CDU), defied the party line in March and voted against the fund. The group has since taken matters to Germany’s Federal Constitutional Court.

Making Up for Previous Failure to Explain the Fund

DGAP’s Shahin Vallée recently observed that discussions on the EU’s economic future were absent from the German election campaign. Indeed, few Germans are familiar with the EU recovery fund and the potentially huge consequences of its perpetuation for the future of the European Union.

Thus, a broad discussion on economic integration needs to be launched before the next economic crisis hits the continent. The Bundestag has a key role to play here in highlighting common European interests without shying away from remaining fault lines. The French presidency of the EU Council in the first semester of 2022 and the Conference on the Future of Europe provide fitting frameworks for discussing the matter.

The new German government should:

As fear of inflation and the dispossession of German savers is once again rising, politicians should urgently address fundamental questions on what future European economic and fiscal policies should look like. Not even hundreds of billions of euros will spare them this debate. 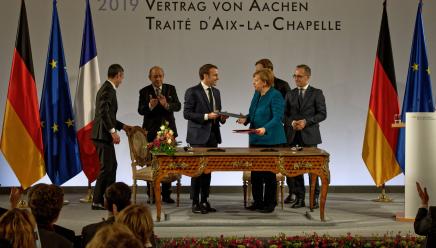