The Russian occupation authorities in the Kherson region recently started to communicate about the danger of an imminent Ukrainian attack on the city of Kherson as well as the rest of the western part of the region, located on the right bank of the Dnipro River.

As the Ukrainian armed forces maintain operational silence about their actions in the region, it is not possible to verify whether this is really the case from open sources. However, there are many signs that the Russian forces seriously expect a major attack and are not confident about their ability to defend the region and its capital.

Vladimir Saldo, the Kremlin-appointed governor of the Kherson region announced on October 19 that the occupation authorities were planning to evacuate 50–60,000 civilians from the Russian-held districts to the other side of the Dnipro, together with all units of the occupation administration. The Kremlin-appointed deputy mayor of Kherson, Kirill Stremousov, has pledged that Russian forces will convert the city into a fortress and defend it until the very end.

Meanwhile, the commander of the Russian forces fighting in Ukraine, General Sergei Surovikin, hinted that the situation in the Kherson region is hard and that it might become necessary to take difficult decisions, though he did not specify what this might entail.

What is evident from these statements is that the Russian authorities are preparing for a siege of Kherson and are planning to defend the city in urban combat. However, taking into account Ukraine’s sustained and highly successful strikes on the communication and supply lines of the Russian forces in the western part of the region, it is questionable how long Russian troops would be able – and willing – to hold the city.

The likely direction of the anticipated Ukrainian attack is from Beryslav, along the Dnipro River. Should the Ukrainian forces achieve a breakthrough there, the road bridge at Nova Kakhovka – the last more or less functioning crossing point over the Dnipro – would become indefensible for the Russian forces. Besides, there are hardly any more fortified Russian positions south of Berislav. Hence, Ukrainian troops could get a lot closer to the city of Kherson, possibly putting it within range of their lighter artillery systems.

Meanwhile, on October 19, following an extraordinary session of Russia’s National Security Council, it was announced that martial law would be introduced in the four occupied regions of Ukraine: Donetsk, Kherson, Luhansk, and Zaporizhzhia. Russia’s Federation Council approved the decision to come into force on October 20.

Martial law will make it easier for the Russian occupation authorities to forcibly mobilize local Ukrainian men and send them into combat against the Ukrainian forces. This has already been happening in the so-called Donetsk and Luhansk National Republics, and it will probably now start in Kherson and Zaporizhzhia too. Under martial law it is also legally easier to nationalize property and to relocate the civilian population, should military interests demand so. In other words, martial law makes it easier for Russia to use all resources of the occupied territories for the purposes of the war. Taking into account the situation in the Kherson region, it is highly likely that the occupation authorities will start using martial law to these ends immediately.

This online commentary was published on October 20, 2022.

Programm
Center for Security and Defense 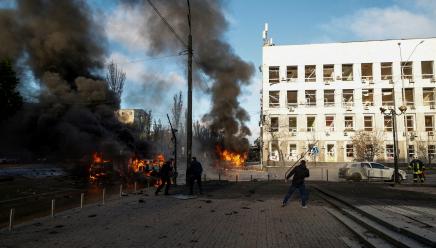