Attacks are retaliatory. Russia is running low on precision-guided missiles but is still able and willing to use them. Moscow’s preferred means of escalation are still conventional ones.

Following the attack on the Kerch bridge between Russia and occupied Crimea on October 8, Moscow launched a wave of missile strikes against Ukraine’s cities and civilian critical infrastructure.

The city of Zaporizhzhia was hit hard in the early morning of October 9. At least 13 people died in the hit residential buildings and another 87 were hospitalized.

In the evening of October 9, Alexander Bastrykin, the head of Russia’s Investigative Committee, reported to President Vladimir Putin that the attack on the Kerch bridge was committed by Ukraine’s special services. Putin called the attack an act of terrorism. During the meeting, both men repeated several times the term ‘civilian critical infrastructure,’ indicating that Russia would pursue a retaliatory strike aimed at Ukrainian civilian targets.

This is exactly what happened on October 10. Russia launched its largest attack against the Ukrainian hinterland for several months. It launched more than 80 missiles and more than 100 Iranian-made drones. Russia used basically everything in its inventory: high-precision cruise missiles such as the Kalibr and the H-101, S-300 air-defense missiles modified to hit ground targets, Tornado multiple launch rocket system missiles, and several other systems. Missiles were launched from Tu-160 and Tu-22M strategic bombers, at least one corvette of the Black Sea Fleet, and various launch sites on land.

Ukraine’s air defense performed really well, managing to take down 41 of the incoming missiles and drones. One Iranian-made drone was shot down by a heavy machine gun, while one Ukrainian soldier managed to take down a cruise missile with a shoulder-fired Igla anti-aircraft missile.

Nevertheless, the attacks hit almost the whole territory of Ukraine, including western cities like Lviv and Ivano-Frankivsk. The cruise missiles launched against these cities crossed Moldova’s airspace, resulting in the Russian ambassador being summoned to the country’s Ministry of Affairs to explain the violation.

For the first time since the summer, Kyiv was hit by missiles (the capital got hit a few times by Iranian-made drones last week, but missiles have not been seen since June), which inflicted spectacular damage to civilian buildings, including one hosting the visa office of the German embassy. The building of the SBU, Ukraine’s domestic counterintelligence service, was also targeted. While the strikes on Kyiv did not inflict strategic damage, in other regions of the country the civilian energy infrastructure was hit hard. Several power plants and transformation stations were hit as well as water-supply infrastructure, causing major blackouts and supply interruptions.

The attacks continued on October 11, albeit with a lesser intensity. Until midday, Russia launched 28 cruise missiles and several suicide drones, again mostly against energy infrastructure targets. According to information from the Ukrainian General Staff, the air-defense forces managed to take down 20 of them.

These latest attacks were clearly of a retaliatory nature. This was confirmed by the extraordinary session of Russia’s National Security Council on October 10, following which Putin said that Russia was taking revenge for the Kerch bridge attack.

The widespread targeting of energy infrastructure demonstrates that Russia had been preparing for hitting these targets for a long time. The Kerch bridge attack probably provided only a convenient pretext for executing this plan.

The strikes also indicate that Russia is running low on precision-guided missiles; otherwise it would not have used also the notoriously inaccurate S-300s. However, these stockpiles have not yet been depleted completely. Moscow is still able and willing to use them against Ukraine when it deems it necessary. Still, the decreasing intensity of the strikes shows that Russia is unable to maintain this frequency in hitting Ukraine’s energy infrastructure for a long time.

The strikes on civilian critical infrastructure also indicate that Russia’s preferred way of escalation is still by conventional means, regardless of the talk about the possible use of nuclear weapons. Even though in the summer former president Dmitry Medvedev threatened ‘unleashing Armageddon’ if Crimea were to be hit, Russia reacted ‘only’ by conventional means when it did get hit. Hence, one may conclude that not all of Moscow’s verbal red lines need to be taken at a face value.

This online commentary was published on October 13, 2022. 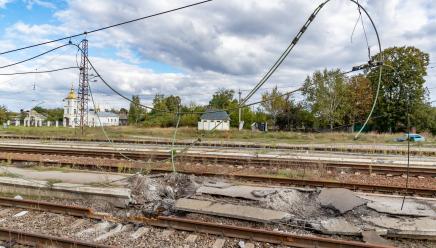 The Battle for Lyman