The Short Answer is Yes

Just when Michael Gove’s theory of Brexit contagion appears to be sweeping Europe, across the Channel it has been shelved. The British are focusing on getting Brexit done so they can start cooperating with Germany again. But the idea of Brexit continues to grip politicians and influence policy everywhere in Europe.

In 2016 Michael Gove, Conservative government minister and co-head of Vote Leave, predicted that the Brexit result would be contagious.

Gove (Boris Johnson’s partner in crime) forecast a wave of democratic rebellion across Western Europe – not necessarily resulting in other members leaving the EU, but certainly heralding a revolt against Europe’s elites.

Gove is currently in charge of preparing the UK for Brexit, and in that role has probably done more than anyone to undermine his own prediction: in his hands, Brexit seems more likely to destroy the UK than the EU.

EU support has risen Europe-wide since the Brexit referendum, and protest parties in Italy, Austria and Germany are in abeyance.

But nevertheless, Western European governments have learnt to take nothing for granted. Covid has injected something odd into the body politic, and its effects are not yet clear. The age of Angela Merkel ends next year and the sun king Emmanuel Macron may well overheat in the run-up to French polls in April 2022.

So who or what will replace them? And will Gove’s curse finally prove real?

Michael Gove’s prediction that other countries would follow Britain’s lead was, of course, a pure product of British exceptionalism: schoolchildren in the UK are taught that their country is simply more democratic than the continent. It is the explanation for why Britain has avoided violent revolution for 400 years: Britain bends quickly but then rights itself; continental systems bend little so collapse later.

But in Berlin surprising numbers of diplomats, pundits and observers are nervously repeating the Govite analysis. Buffeted by bad news, and brought up to admire British parliamentary democracy, they fear that Brexit may yet be a harbinger – they expect mainland Europe to be hit by the populist pressures.

And, oddly enough, some think Germany itself may be rocked.

The German government is currently enjoying positive international reviews for its handling of the covid pandemic. But, precisely there is a parallel to Brexit. Germans have been out on the streets in protest against the government. And that mix – praise abroad and disdain at home – is a familiar one.

Just exchange ‘covid lockdown’ for ‘economic austerity’, and you have the same conditions that preceded Brexit.

The return of working-class nationalism

During the Eurozone financial crisis, 2008-2013, the UK government garnered praise abroad: Britain’s austerity discipline compared favourably to the shambolic policies of other Western European countries. This praise intensified ahead of the Brexit referendum, as partners (notably in Germany) tried to bolster the Cameron government. But, oddly, this only fuelled ordinary Britons’ disdain for their leaders.

In this reading, the working classes in Britain were deeply sceptical about the government’s drive for austerity, seeing its failings up close, and feeling that it was a conspiracy cooked up by the rating agencies and Davos man.

In time they came to feel that the praise was for them, the nation, not their leaders: they perceived that there was something innately superior about the British way which even their leaders could not mess up.

It was this mix – praise abroad, disdain at home – that led them to disregard the warnings of domestic elites in 2016 and take on the world on their own. And surprising numbers of observers here think the next German government will be forced to bend to similar pressures – some even recommend a pre-emptive move in that direction, tearing up the usual constraints in its international policy and beating a more jingoistic drum.

Germany and the curse of success

Germans with a poorer education are certainly sceptical about the need for lockdown, some ascribing it to an international cabal of globalists. But the obvious problem with this line of analysis is that the vast majority of Germans tend to trust their government during crises. And the Merkel government has amply repaid this trust, genuinely handling the Covid crisis well.

But still, political advisers here believe that the Merkel government may actually be punished for its success. They predict a paradox typical of the terror alert: a government introduces strict measures, no attack comes and, rather than giving the government credit for frustrating the terrorists, people say there has been an over-reaction.

If Germans are ordinarily sceptical of their government, then on just such grounds of civil liberties.

The situation is not helped by foreign pundits, not least from Brexit-Britain, who wish to bolster the government. They have inflated the praise due to the German government, flagellating themselves as they praise Berlin for “doing it better” and as “the leader of the free world”. Germans see that their government is nothing of the sort, but accept the plaudits on behalf of the nation.

Europe as a catalyst

Nobody here thinks Germany will leave the EU of course – rather the opposite: they expect Germany to come roaring back, presenting aggressive new ideas after having spent years meekly responding to grandiose French initiatives. But they expect that to occur on the basis of growing Euroscepticism. And this is because of a further parallel to Brexit Britain – the way the EU distorts that mix of international praise and domestic disdain.

The EU created an optical illusion in Britain: the UK’s bank-heavy economy had, ahead of the financial crisis, sucked wealth out of the rest of Europe and then plugged it directly into the American sub-prime market.

Something similar is true of Germany: Germany’s trade-heavy economy sucked wealth out of the rest of Europe and then plugged weak neighbours straight into the Chinese wet markets.

No wonder the pair shone in comparison to the rest of the EU. Thanks to this optical illusion, voters fail to see how narrow their escape from calamity has been. Disregarding domestic elites, they treat their European partners as a burden and believe the EU is magnifying the risks of globalisation and blocking the opportunities. They do not see it as the source of their position and status.

Brexit as a middle-class uprising

Ironically, back in today’s Brexit Britain, just when Gove’s theory of Brexit contagion appears to be sweeping Europe, across the Channel it has been shelved. British politicians no longer seem to be waiting for the working-class revolt to spread across Europe, let alone hoping for the collapse of the sclerotic “EUSSR”. They are focusing on getting Brexit done so they can start cooperating with Germany again.

Far from seeing Germany as locked on a British trajectory, ministers in London now seem to think Britain is locked on a German trajectory. This is because they have come to believe Brexit was a revolt not of the left-behind working-classes, but rather of the shrinking middle classes. And they believe Germany is streets ahead of them in mastering this particular political shift.

They look back to 2013 when the Alternative for Germany party was set up. The AfD appealed to the shrinking middle classes, in the same way that Johnson and Gove did. Both tried to harness the forces of populism for the middle classes.

But whereas Johnson and Gove got swept to power, the AfD has torn itself apart. Johnson a centrist internationalist at heart, likely envies the Germans and their stability.

Sure enough, the Johnson government now appears to be trying to set Britain on a more German path, not least in the field of foreign policy. If proof is needed, UK foreign policy was recently slammed in a parliamentary report as “adrift”, “lacking in strategic vision” and unequal to the rise of an illiberal China. These are epithets thrown at Germany, whose tradition focus on pursuing trade opportunities has looked increasingly unequal to today’s geopolitical situation.

But Germany is in fact far ahead of the UK when it comes to what might be termed the foreign policy of the shrinking middle classes. It has recovered from its failed calculus that international trade would lead to a growing global middle class and cement liberal order.

Germany now seeks trade with authoritarian emerging economies like China in order to sustain its domestic middle classes, but not at any cost.

And this reveals a final irony: whereas the UK appears to be trying to align with Germany, by the time it achieves this, that version of Germany may have disappeared to be replaced by something more British. And what might that mean?

Until quite recently, Britain practised the foreign policy of the working-class revolt, espousing jingoist gunboat diplomacy, rolling the navy into the Gulf and the Asia Pacific, and the army into Eastern Europe, offering protection in return for trade deals.

So is Brexit still contagious?

This takes us back to the original question: is Brexit still contagious? And the answer is yes – at least if Brexit is seen as a mental disorder which disproportionately affects Europe’s political elites, and leaves them guessing about how to reconnect to voters.

Brexit continues to grip politicians on both sides of the Channel, causing havoc for policy.

This publication was first published on November 30, 2020 by Visegrad Insight here. 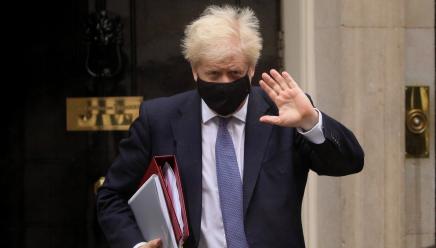