This text is part of a compiled report published by the Center for Security Studies, ETH Zürich. You can download the full PDF here.

The massive Russian troop buildup on the border with Ukraine since December 2021 has served to exert massive pressure on the U.S., NATO, and the EU member states to negotiate a new European security order. For the Russian leadership, the timing seems favorable for delivering an ultimatum to negotiate spheres of influence, guarantees for an end of NATO expansion in Europe, and a withdrawal by the U.S from eastern NATO member states, because they view the U.S. and key European states as weakened. U.S. President Joe Biden had wanted to withdraw from European security policy and give Europeans more responsibility for their own security, in order to focus on the global conflict with China. In France, there will be presidential elections in April, and the right-wing candidates, which are mostly Putin friendly, represent the most dangerous opponents for Emmanuel Macron. Since the German federal election in fall 2021, a traffic light coalition of Social Democrats (SPD) under Chancellor Olaf Scholz, the Greens and Liberals has been governing in Berlin, which has not yet established a consolidated position in dealing with Russia.

The coalition agreement already made it clear that the new German government is committed to greater involvement in the countries of the EU’s Eastern Partnership and to the territorial integrity of Ukraine. However, the chapter on relations with Russia is vaguely framed and appears to be a difficult compromise between the parties. The controversial Nord Stream 2 pipeline is not mentioned directly, and only indirectly addressed in a statement that large energy projects are to be regulated by the EU. The polyphony from the Bundestag, the German parliament, on issues such as arms deliveries to Ukraine, the possibility of sanctioning Nord Stream 2 or Russia’s disconnection from the international payment system SWIFT in response to any attack on Ukraine has caused irritation among allies in Europe and the U.S. Left-wing SPD politicians, such as Rolf Mützenich, have already questioned “nuclear sharing” during the election campaign. Just a year ago, German President Frank-Walter Steinmeier (also SPD) had called Nord Stream 2 and energy relations “almost the last bridge” to Russia.

Chancellor Scholz has failed to provide clarity through a lack of communication and ambivalent statements on sanctions and Nord Stream 2. Only on the subject of arms deliveries to Ukraine does there seem to be a consensus in the federal government, namely that there definitely will not be any. The closeness of some SPD politicians to former Chancellor and Chairman of the Board of Directors of Nord Stream 2 Gerhard Schröder, as well as his statements on saber rattling by Ukraine in the current conflict, have further irritated and raised the question of whether Germany is still a reliable ally.

There is no doubt that Germany will fulfill its obligations with regard to NATO’s Article 5 and is currently increasing its troop contingent in Lithuania, as had been planned for some time. Members of the government have made it clear several times that, should a massive Russian attack on Ukraine take place, Nord Stream 2 will not go into operation and the German government will agree to sanctions coordinated with its allies in Europe and the United States. However, the ambivalence in Germany’s position and communication does not seem appropriate in light of the current security threat. This behavior reflects the division in German politics and society about how to deal with Russia and Ukraine, as well as a refusal to assume more responsibility for security policy in Europe.

For the last 30 years, Germany was Russia’s most important European economic and negotiating partner. Economic interests, Germany’s economic importance as well as a sense of historical guilt (World War II) and gratitude (German reunification) have shaped the relationship between the two states. However, those days are over: Russia has slipped to 14th place in German foreign trade and German companies are leaving Russia. The annexation of Crimea and the war in the Donbas in 2014, as well as Russian disinformation campaigns, the Tiergarten murder, the Russian state’s attempt to kill opposition politician Alexei Navalny, and the crackdown on Russian civil society and especially the human rights organization Memorial have led to an alienation between the two states. Russia is increasingly defining Germany as an adversary that it is tries to weaken with hacking attacks and disinformation campaigns. German and Russian domestic and foreign policies follow fundamentally contrary goals and interests.

Against this backdrop, German policymakers have failed to adapt their Russia and Eastern Europe policies to current realities and to discuss this honestly with the German public. The government has continued to try to maintain the illusion of a policy of cooperation and engagement that has been going nowhere for years. Chancellor Angela Merkel has long described Nord Stream 2 as an economic project, and her successor Olaf Scholz also named the pipeline a purely private sector project. The fact that this project primarily pursues geopolitical goals by making Ukraine superfluous as a transit country, and thus puts Ukraine in a position in which it can be blackmailed by Russia has been ignored out of economic interests. Russia’s transformation into a repressive state internally and an aggressive state externally since 2012, at the latest, has only been rudimentarily perceived in the German public debate in recent years. Germany now buys 55 percent of its gas from Russia and has sold key domestic infrastructure, such as gas storage facilities, to Russian companies. The largest gas storage facility in Germany operated by Gazprom is currently only 3.7 percent full, which could lead to supply bottlenecks in the event of a large scale conflict with Russia. Thus, already under Angela Merkel, Germany had made itself more vulnerable and dependent on an authoritarian state that is increasingly revisionist.

In the process, cracks are running through all major German parties on the question of how to deal with Russia. Pacifism, anti-Americanism, and ignorance of geo- political and security policy shifts in both Europe and worldwide testify to a denial of reality in German politics. Germany has become the main donor and leader of Ukraine in recent years. For Angela Merkel, the war in the Donbas was a top priority; she used her political capital to negotiate with Russia on this conflict. Nevertheless, all previous federal governments have supported Nord Stream 1 and 2, undermining the goal of strengthening Ukraine. Russia’s goal of building Nord Stream 2 aims to take the Ukrainian pipeline off the grid, making the country more vulnerable to Russia. The agreement with U.S. President Biden on Nord Stream 2 from July 2021, the idea of transporting refugees from Belarus to Ukraine by parliamentarians from the governing coalition, unfortunate debates about not supplying weapons due to the WW2 guilt with regard to Russia but not Ukraine, have led to a deep alienation with Ukraine.

For Germany, its international credibility and role as Europe’s most important negotiator with the Russian leadership is at stake. The current German government has intervened diplomatically late in the negotiations with Russia. It is still assumed in Berlin that Moscow is bluffing and will not attack in the end, because of the high costs of a military attack on Ukraine. However, there is more at stake than “just” Ukraine. The conflict is also about the future of the European security order and Germany’s role as a responsible leading power.

This text is a contribution to the report Russian Analytical Digest No. 276: Russian Military Build-​up around Ukraine – Part 1 and was first published on Februar 18, 2022 by the Center for Security Studies, ETH Zürich. 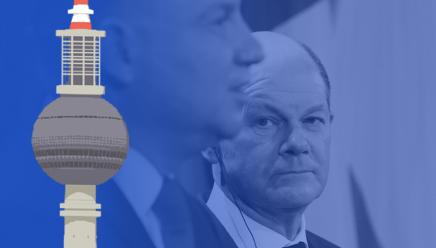 From Washington to Moscow

Chancellor Olaf Scholz is stepping onto the world stage. And he is doing better than his critics suggest. His Social Democrats, meanwhile, are breaking with their Ostpolitik, which lately only meant “good relations” and “dialogue,” irrespective of how badly Russia behaved.