The Moral Bankruptcy of German Pacifism

Germany has long considered itself unique, and this mindset has given rise to a wide range of irresponsible and dangerous foreign-policy positions. In the current context, the country’s reluctance to support Ukraine has come at the expense of its closest friends and neighbors, not to mention its own reputation.

After a prolonged pregnancy, Germany finally delivered its decision to send heavy weaponry to Ukraine. But the baby was stillborn: the Gepard (Cheetah) anti-aircraft tanks that Germany is offering are antiques that lack ammunition. The manufacturer has only 23,000 rounds available. The German Defense Ministry has since announced that it will look for spare ammunition in faraway places like Jordan, Brazil, and Qatar. While Russia lays waste to its neighbor – murdering, torturing, and raping its civilians – Germany remains mired in an inept muddle.

Both countries have rich militaristic traditions, ruling as totalitarian empires in the twentieth century. Their paths diverged after the defeat of Hitler, but continued to move symmetrically. In particular, while Germany renounced imperialism, the belief in a “special mission” (Sonderweg) in history has retained its hold.

This belief, born of imperial Germany’s position between autocratic Russia and the liberal-democratic West, has given rise to all kinds of dangerous and irresponsible foreign-policy positions, from the nineteenth-century Drang nach Osten (“drive to the East”) and vision of Mitteleuropa (German leadership of Central Europe) to Hitler’s search for Lebensraum (“living space”) and Chancellor Willy Brandt’s Ostpolitik (rapprochement with East Germany and the Soviet Union). Interestingly, Ukraine was often at the heart of these stratagems.

In this context, to describe postwar Germany as “pacifist” is to choose the most charitable term. Others would attribute Germany’s foreign-policy stance not so much to a renunciation of militarism as to greed, opportunism, and cynicism on the part of its business leaders and politicians. After all, among the strongest supporters of sending heavy armaments to Ukraine are the supposedly pacifist Greens.

Why can’t Germany treat Ukraine the same way other Western European countries do? The refusal to send weapons to conflict zones equates the aggressor with the victim. For several weeks, German policymakers, refusing to acknowledge this, blocked other NATO members from sending arms to Ukraine.

Why have the Ukrainians received more weapons from Estonia (totaling $240 million) than from Germany (totaling $130 million), a country with an economy more than 100 times larger? Even in terms of financial and humanitarian aid, Germany’s support has been an embarrassment. What ever happened to “never again”?

German Chancellor Olaf Scholz’s statements and decisions since the start of Russia’s war have been nothing short of bizarre. Consider the following compendium from Thomas C. Theiner, a Kyiv-based film executive and former Italian army officer who has been documenting Scholz’s statements.

In late February, Scholz asked for a list of available weaponsfrom the German defense industry, but cut all of the key weapons that Ukraine requested before sending it to the Ukrainian ambassador. When the media got hold of the original list, Scholz claimed that the deleted weapons would take longer to deliver.

The defense industry denied this claim, but Scholz then found a new excuse: The Ukrainian armed forces could not be trained to use the weapons in the time available. But German defense experts denied this, too, pointing out that the Ukrainians could easily master the weapons in 2-3 weeks, just as they have done with Australian, Canadian, American, and French weapons.

Scholz then dug himself a deeper hole by claiming that NATO needed to approve the transfer of weapons. When NATO officials and Germany’s own generals denied this, Scholz tried to arguethat no other NATO or EU member state was supplying heavy weapons to Ukraine. Hearing this, officials from the United States, the United Kingdom, Australia, Poland, the Czech Republic, Slovakia, Romania, Turkey, Italy, Finland, Denmark, Romania, and the Netherlands all presented lists of the heavy weapons they are supplying to Ukraine.

As Theiner reports, Scholz then announced an additional €2 billion ($2.1 billion) worth of military equipment for Ukraine, but German parliamentarians soon learned that the government was really allocating only €1 billion, and that this would not be available for 2-3 months. After the US, France, Poland, Romania, Japan, the UK, and Italy confronted Scholz, he pivoted again and declared that Ukraine could receive the €1 billion immediately and order whatever it wanted from a list of available weaponry. But Ukraine’s ambassador then revealed that Scholz had removed all the items Ukraine actually wanted from the list. Scholz then warned that countries supplying armored vehicles to Ukraine would be opening themselves up to a Russian nuclear strike. The process of evasion continues.

Neither Scholz nor even his domestic critics seem to realize what impact his waffling is having on countries like Poland and the Czech Republic, not to mention Ukraine. We in Central and Eastern Europe have been reminded that we live between two states that both want to follow their own special, unique paths. This is not to suggest that Germany today is anything like Russia, or that Scholz is like Vladimir Putin. Rather, the problem is that Germany’s pacifism is encouraging militarism. By refusing to stand up to the aggressor, Germany has exhibited an astonishing degree of moral desensitization.

As such, Germany is heading for another grave historical humiliation for which it will spend years – if not decades – apologizing and correcting itself. But no one will believe that it is truly sorry, especially not in Eastern Europe, which is Germany’s biggest economic partner. The central principle of Polish foreign policy is the so-called Giedroyc doctrine:  Poland will not be independent without an independent Ukraine. This principle was formulated when postwar Poland shed its own imperial illusions and accepted its eastern borders without Vilnius and Lviv.

Unless Germany starts to act like its allies, a huge political breach in Europe is inevitable. Ukrainians will lose all trust in Germany, and the rest of Central and Eastern Europe will have learned always to be suspicious of German motives, no matter who is in charge.

This text was first published by Project Syndicate on May 2, 2022. 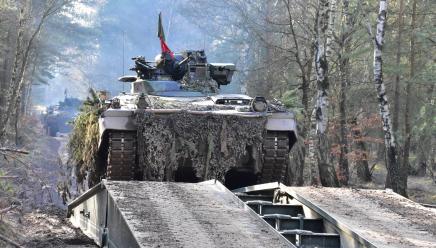