How Germany Tries to Lead From Behind in CFSP

Germany’s greatest problem with the EU’s Common Foreign and Security Policy (CFSP) is probably Germany, and that is everyone else’s problem too. Berlin seems most comfortable to lead from behind - taking action under an EU banner and with a sufficient grouping of member states, but always as part of a crowd of partners who respect its own very specific limitations and interests. This rather reactive role in fact requires a lot of forward shaping. But other member states are reluctant to orient themselves around Berlin whilst questions about its own reliability as a partner remain. It is a circular proble.

This text is a chapter from a collaborative Globsec report on National Approaches to the EU’s Common Foreign and Security Policy. You can download the entire PDF here.

Germany believes it would become more active in the EU if only it could fix the institutional machinery. The usual reference is the idea of introducing qualified majority voting (QMV) to CFSP decision-making. Berlin repeatedly returns to this idea, most recently pushing member states to agree unanimously to certain strategic goals which could then be undertaken by QMV. It raised and then dropped the idea during its 2020 presidency of the EU Council, but now intends to pursue the option of QMV at the Conference on the Future of Europe.

When Germany is not tinkering with decision-making structures, it is setting the world to rights on paper. The EU’s 2016 Global Strategy (EUGS) chimed with the mood of glum Realpolitik in Berlin, where people believe that “history is back” after a geopolitical hiatus at the end of the Cold War, and that the EU’s southern and eastern neighbourhoods have deteriorated into a “ring of fire.” But perhaps for the same reason, the Strategy has not inspired much in the way of European action.

Berlin feels it is too early to revisit the EUGS and to galvanize itself and the other member states by writing another grand European strategy. But Berlin has spotted a gap in the paper trail which it wants to fill: EU members, after signing off on the EUGS, began work on capability plans, and Germany believes the EUGS provides insufficient guidance as to the level of ambition. Hence its support for a European Strategic Compass, a new document based on a 360° analysis of all member states’ fears.

Other member states, although they understand the reasoning, are left wondering what breakthroughs Germany is hoping for here. Can the Germans really be in the dark about what Poles, Estonians or Greeks fret about, or the kind of reassurance they require from Berlin? Is this just a prelude to Germany launching an EUGS Review? Or – worse - will it simply trigger another round of scenario exercises and tabletop war-games as the Germans picture themselves acting under crisis conditions but never quite follow through?

As for coalition-building, Germany focuses on its most problematic friends: the French. President Macron has shown an appetite for acting outside the EU framework, most recently in his coalition of the willing in the Straits of Hormuz (EMASOH). Here in Berlin, it is taken as fact that the French politicise, polarise and ultimately set up European coalitions outside the EU toolbox. Seldom do Germans see that Macron is doing this in large part to prod Germany into action. It is another circular problem.

Finally, what really confounds Germans is that they are accused of double standards when they do take decisive international action. Damned if we do, damned if we don’t, they complain here. But Germany is a rising power within a shrinking power: it is growing bigger within an EU shrunk by a decade of Germany’s reactive crisis management. If Germany is accused of double standards it is because its foreign policy makers are exploiting this: they disguise the Realpolitik of a growing power with the glum constraints of a shrinking power.

This text was first published as part of a collaborative report "National Approaches to the EU’s Common Foreign and Security Policy" by Globsec in May 2021. 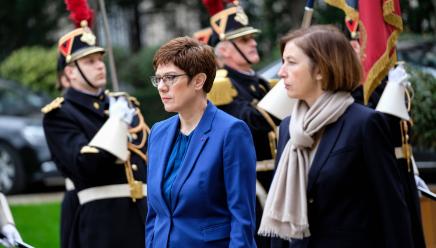