The Future of European Security – What Does Russia Want?

The massive build-up of Russian troops at the border with Ukraine since early December 2021 primarily serves to improve Moscow’s position in negotiations with the US and NATO on a new European security architecture. Specifically, it is about recognition of the limited sovereignty of Ukraine and other post-Soviet states, combined with a commitment to acceptance of spheres of influence in Europe.

This can also be seen in the context of the annexation of Crimea by Russia and the war in the Donbas, which called into question fundamental international agreements on post-Cold War peace and security such as the Charter of Paris and the Budapest Memorandum. By adopting this approach, the Russian leadership makes it clear that the future of Ukraine and particularly the situation in the Donbas should no longer be negotiated within the framework of the Normandy Format with Berlin and Paris but primarily with the US administration. However, if the European countries are to be involved in the negotiations, Moscow would consider the option of a “Mini Yalta” with the leaders of the US, Germany, France, the UK and Italy.

The Russian leadership is demanding legally binding security guarantees from the US and NATO in two draft treaties. Key demands are, firstly, a commitment to refrain from undertaking any further Eastern enlargements of NATO, particularly with regard to Ukraine or other states within the region such as Georgia. This would entail withdrawing the prospect of membership offered at NATO’s Bucharest summit in 2008. Secondly, the Alliance should guarantee that it will not deploy any weaponry or military forces on the border with Russia. Thirdly, NATO should end its military cooperation with post-Soviet states and scale back its military forces to the 1997 level. This would mean no longer deploying military forces and weaponry in NATO countries that were not members of the Alliance in 1997. Moscow is therefore also demanding that NATO withdraw its multinational battlegroups from Poland and the Baltic states. Fourthly, the US should pull its nuclear weapons out of Europe and, fifthly, cease meddling in Russia’s internal affairs. Here, the Kremlin is referring to support for the so-called Colour Revolutions as part of a US democracy-building agenda.

Russia’s Foreign Minister Sergei Lavrov has also made it clear that Moscow takes a critical view of any NATO accession by Finland and Sweden. The Russian leadership is thus extending its reach beyond the traditional post-Soviet sphere of influence and, by seeking to reduce NATO’s role in Europe, is striving for a dominant position in European security policy. Russia is no longer merely demanding a right of veto in all matters pertaining to European security, as called for in former President Dmitry Medvedev’s 2008 proposal for a treaty on a new European security architecture. Instead, the aim is to drastically curtail the US’s role in Europe, to establish security guarantees for Moscow and to consolidate spheres of influence in Europe on a legally binding basis. Initial talks between the US and Russia on 10 January 2022 showed that such guarantees are unrealistic.

Russia regards Ukraine as a central element of its sphere of influence and integration. The Russian leadership has given up negotiating with the Ukrainian President Volodymyr Zelenskyy on a solution to the Donbas conflict. This was made very clear by Dmitry Medvedev in an article in October 2021 in which he described Kyiv as “Washington’s vassal” and argued that the only approach that made sense was to negotiate Ukraine’s future with the US government. The Russian leadership is also worried about Ukrainian integration into NATO by stealth, through arms deliveries and military cooperation with the US and other NATO members. For Russia, this would raise the stakes in escalating the conflict in Eastern Ukraine as it would further increase Ukraine’s defence capabilities. That could cost Moscow its escalation dominance and hence its influence on Kyiv.

Currently, however, the escalation dominance lies with Russia, which has put the US leadership under pressure with its amassing of troops, persistently strident rhetoric and two treaty drafts. As occurred after the build-up of troops in early 2021, President Vladimir Putin has managed to induce US President Joe Biden to talk to him. Putin is attempting to force Biden into a bilateral negotiating format, with Putin thus recognised as an exclusive negotiating partner on equal terms. The US President’s approach – which involves delegating European security issues and the Russia-Ukraine conflict to Europe, primarily Germany – is thus rendered obsolete. Moscow does not accept the Europeans as equal negotiating partners as they have no relevance as security policy actors. Meanwhile, Washington is forced to accept that it can no longer ignore Russian security interests. With this approach, the Russian President is testing the unity between the US and its European allies.

Reaching agreement on the security guarantees demanded by Russia will not be possible in the short term. The appropriate response to Kremlin policy is therefore to address European security issues in a multilateral negotiating framework, with close coordination between Washington and the European capitals. The revival of the NATO-Russia Council and the upgrading of talks within the OSCE framework point in the same direction. Granted, there is a complete lack of trust, and both institutions are weakened by blockading tactics, but the Kremlin has made it clear that without fresh negotiations on European security, another war in Europe is possible. A new contest is thus unfolding between Europe and the US on the one hand and Russia on the other, in which it is no longer sufficient simply to hark back to documents agreed in the early 1990s. The issue of arms control should also be put back on the agenda with Russia, as almost all the key disarmament agreements are now inoperative.

What are needed, firstly, are clear red lines, combined with possible economic sanctions and military deterrence in order to strengthen the negotiating position vis-à-vis Russia. And secondly, a functional multilateral format is required in which the US, together with its European allies, discusses its ideas on European security with the Russian leadership. This could be a lengthy process, with no quick-fix solutions: the positions diverge too much for that. It is important to take the escalation dominance away from Moscow and to move from a reactive to an active role. Germany occupies a key position in this context: it has the potential to crucially influence the development of a multilateral format and put all options, including the cancellation of Nord Stream 2, on the table in order to credibly demonstrate to Moscow that there is unity with the European partners and Washington.

This online commentary was first published by ZOis (Centre for East European and International Studies) on January 12, 2022. 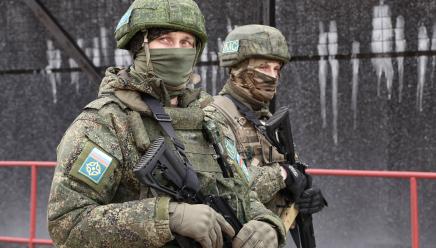 Kazakhstan After the Unrest