Delivering on the EU’s promise of a membership perspective for Ukraine, and for Moldova and Georgia too, is crucial for the future of a democratic and stable Europe. This also requires recognizing geopolitical reality by bringing together EU policy towards these three Eastern Partnership countries and the Western Balkan ones. Such a strategic matter needs more leadership from the large EU member states, particularly Germany.

On June 23–24, the European Council will decide whether to offer Ukraine, as well as Moldova and Georgia, the status of candidate to EU membership. This follows the European Commission’s recommendation on June 17 to offer Ukraine and Moldova this status, but that Georgia should satisfy more conditions first. During their visit to Kyiv the previous day, Germany’s Chancellor Olaf Scholz, France’s President Emmanuel Macron, Italy’s Prime Minister Mario Draghi, and Romania’s President Klaus Iohannis said their countries would support candidate status for Ukraine. This strong message was much needed not only in Kyiv but also in the capitals of the EU.

The timing of their Ukraine trip was influenced by the growing concern that this issue will land before a divided European Council, where it will require unanimity among the EU’s 27 members. Candidate status may be only a political construct that denotes the start of a lengthy accession process but opponents in the European Council will argue that the three hopefuls are not ready to begin it. His taking part in the joint visit to Kyiv signaled that Scholz had finally got on board behind this proposal. By acting together, the leaders of the EU’s “big three” plus Romania, increased the momentum towards a positive outcome. This allowed their peers in reluctant member states such as Austria, Denmark, the Netherlands, and Portugal to shift their positions as well by pointing to the pressure they face.

Ukraine Must Be Rescued from the “Grey Zone”

By offering Ukraine candidate status, EU leaders would show that they take Russia’s challenge seriously. This status is a matter of survival for Ukraine as a sovereign state. The European Council failing to offer it, or the offer of a lesser status, would undermine the morale Ukraine needs to win the war – with serious consequences for European security. This is a historical watershed moment that will determine if Ukraine and the EU’s other eastern neighbors have the opportunity to integrate into a democratic, free Europe and to stay on the reform path towards EU norms and standards.

There is no “Russian alternative” or “neutral status” for Ukraine. Withholding an EU accession perspective would cement its position in a “grey zone” while pushing it de facto into a Russian sphere of influence based on raw military power. Denying this perspective to Ukraine would undermine the EU’s credibility and levers not only in the country but also in the whole eastern neighborhood. It would also undercut the EU’s influence in the Western Balkans. This would create more instability and potentially failed states in the wider region, resulting in greater long-term costs for the EU.

Therefore, while all the attention is on Ukraine, it is crucial that the EU members do not forget Moldova and Georgia. These must not end up as the next victims of Russia’s geopolitical ambitions for want of attention by the EU. Fortunately, the European Commission has backed Moldova’s application for candidate status based on the fact that the government in Chisinau is carrying out necessary reforms. But Georgia will have to wait and meet several conditions before it can be considered a candidate.

Moldova and Georgia Are Part of the Same Package

The three countries should as soon as possible begin a merit-based accession process that can be adjusted along the way, leading to a progressive differentiation among them. Therefore, the EU member states should follow last week’s recommendations by the European Commission.

Moldova today has its most reform-oriented government for decades. Granting it candidate status would be an important incentive to keep the reform dynamic on track and to strengthen the government’s credibility at home. It would not, however, solve the country’s underlying economic and social problems. The government is dealing with three simultaneous crises with regard to security, energy, and refugees that deepen Moldova’s economic and budget crisis.

Any impetus for further pro-EU reforms should thus be accompanied by more short- and medium-term financial support. Moldova needs to reduce its energy and gas dependency on Russia. It also needs more immediate EU financial support for hosting tens of thousands Ukrainian refugees and to bring qualified personnel into government institutions. Such assistance could be linked to the EU accession process, which will take a long time, and can help to make the pro-reform government politically less vulnerable to hybrid threats from Moscow.

Georgia’s current government does not have a clean track record when comes to the values listed in Article 2 of the Treaty on European Union. For example, it pulled the rug from under its own membership application by locking up the director of a critical TV channel. Yet shutting the country out of the accession process altogether, while Moldova and Ukraine surge ahead, would further disorient a society whose majority is pro-EU. The proposal by the European Commission to offer Georgia a status of potential candidate with a clear road map for the next six months could create opportunities for society to pressure the government for democratic changes.

If Ukraine and Moldova receive candidate status this week, this will result in an EU policy shift linking them with the countries of the Western Balkans that are already in the accession process. The EU has so far dealt with the two regions through the separate enlargement and neighborhood frameworks but the distinctions between them are now blurring. The fundamentally new geopolitical situation requires an integrated policy and the creation of a platform where candidate countries from the Western Balkans and the Eastern Partnership can regularly meet and exchange experiences.

The EU’s enlargement and neighborhood policies can together form a barrier to further Russian aggression and destabilization but that requires closing the gaps between them. Competition between the two sets of countries should be prevented. Emmanuel Macron has argued in favor of a European Political Community and European Council President Charles Michel gave the idea a spin with his idea for a European Geopolitical Community. The idea, involving gradual sectoral integration and accession to the internal market, has already found some resonance. However, it should not become an alternative to full EU membership.

Rather, integration in some sectors should be used to create a more realistic and faster path for integration into the EU and to prepare countries for full membership, while in parallel reforming the processes and decision making in the EU. That should involve faster integration into the common market, economic and energy transformation in the context of the Green Deal, and further security cooperation, particularly with Ukraine. The reconstruction of Ukraine should be combined with green energy and economic transitions. All this would constitute a soft-power solution for sustainable transformation and can create a new geopolitical reality in Europe as an answer to the Russian aggression.

The position of Germany’s government, particularly the chancellery, seems to have shifted from earlier hesitancy about candidate status for Ukraine without further conditions in the last two weeks. Yet, it is not enough for German diplomacy to strive mainly to forge a consensus among member states, as has been the case so far. For skeptical EU capitals, Berlin needs to make clear that meeting the rules and criteria for accession are the foundation for any new membership candidates, with the European Commission guaranteeing that the process is strictly followed.

Scholz’s recent trip to Kosovo, Serbia, and North Macedonia, advertised a strong commitment to EU enlargement that is welcome. Here too, commitment needs to be followed by more leadership from Berlin, namely by urging a geopolitical Zeitenwende in the EU’s policy towards its eastern neighbors. This would make Ukraine, Moldova, Georgia, and the Western Balkan countries strategic allies rather than competitors in this regard.

The chancellor needs to lead the EU on this topic, together with his French and Central European counterparts. Within a more proactive enlargement and neighborhood agenda, Germany needs to play its role as Europe’s economic and political heavyweight as well as win back credibility in Ukraine and among its EU partners.

This online commentary was published on June 20, 2022

Dr. Stefan Meister
Head of the Center for Order and Governance in Russia, Eastern Europe, and Cent…
Twitter
@meistefan1 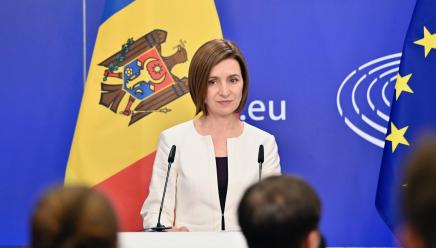