In the early morning of August 29, Ukraine launched its long-awaited counterattack in the Kherson region. This was preceded by weeks of meticulous efforts to degrade the logistics and supply lines of the Russian forces stationed west of the Dnipro River. Ukraine has skillfully used Western precision artillery systems – primarily the US-made HIMARS multiple-launch rocket systems – to hit Russian ammunition depots, commands posts, traffic junction points, and, most importantly, the three bridges that lead across the Dnipro into the occupied part of region. Already before the attack, bombings had rendered all three bridges unusable for the transit of heavy military vehicles. Russian repair efforts were in vain against Ukrainian repeated precision strikes. Russian forces tried to construct pontoon bridges across the river, but Ukraine’s artillery destroyed or damaged these ones too. They then attempted to build a massive floating bridge composed of large cargo barges close alongside the Antonivskyi bridge in the hope it would provide cover from the HIMARS missiles, but this construction was not completed when Ukraine launched its offensive.

A few days ahead of the offensive, Ukrainian forces also damaged the crucial Dariivka bridge over the Inhulets River in order to further segment the Russian forces west of the Dnipro.

In addition to this, Ukraine efficiently employed US-supplied AGM-88 HARM radar-seeking missiles against Russian air defenses. This came after Russia’s air force had to decrease its operations in the Kherson region, with planes withdrawn from their westernmost bases in Crimea and relocated to more distant airports.

All in all, the offensive was launched when the supply lines and the air defenses of the Russian forces, as well as their local commanding structures, were weakened.

Announcing the offensive, President Volodymyr Zelensky pledged to retake all occupied territories. He told the Russian troops west of the Dnipro River to run for their lives.

As far as can be gathered from open sources, the offensive initially broke through Russia’s first defensive lines, gaining a small amount of territory, including a few settlements. A forcibly mobilized unit from Donetsk apparently abandoned its positions, after suffering heavy losses. However, the fortified Russian positions and the concentrated fire of Russian artillery slowed down the Ukrainian push on the second day.

In response, Ukraine started to employ its HIMARS launchers, which had been used only for deep strikes, against targets on the frontline too.

At the time of writing, the fight is continuing in all five directions of Ukraine’s offensive. Much remains unclear about events on the frontline due to the fog of war. However, due to the multilayered Russian defensive lines, one should expect not any sudden Ukrainian breakthrough or Blitzkrieg-type progress, but more a slower, grinding type of offensive.

Due to the damage to river crossing points, Russia is unable to deploy significant reinforcements, and particularly not much heavy equipment onto the western shore of the Dnipro River. Thus, if Ukraine is able to maintain the pressure on the Russian forces there, it is likely to make more territorial gains as Russian supplies will start running dry.

Meanwhile, Russia is reportedly moving forces, including newly set-up reservist units to the Zaporizhzhia region. The purpose is yet unclear, but it is likely that it will try to launch an offensive there in order to divert Ukraine’s resources from the Kherson front.

Russian forces and local separatists in Kherson do not seem to be overly optimistic about their prospects, though. The head of the Russia-appointed administration of Kherson, Kirill Stremousov, has fled to the city of Voronezh in Russia, nearly 700 kilometers from the frontline. There are reports that Russian soldiers have started to loot civilian houses in Kherson.

Given the current situation, it is highly unlikely that Russia could hold the separatist referendum in the Kherson region that it planned for the second week of September. This is an achievement of Ukraine’s counteroffensive, regardless of how the fighting develops in the near future.

This DGAP online commentary was first published on September 2, 2022. 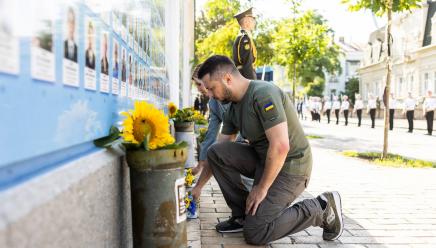