While the EU has tended to frame enlargement in terms of charity, morality, and – above all – technicality, it has failed to exert political leadership over the process. Member states skeptical of enlargement have been able to block progress on technicalities and construct geopolitical excuses for their caution. Now, however, Germany and Italy can make a persuasive geopolitical case for enlarging to the Western Balkans, and they have the political calculus on their side. There is no excuse for missing this opportunity.

Since the 1970s, the European Union has handled each major shift of international power through enlargement. It countered Europe’s “loss of empire” by integrating the UK, Ireland, Denmark, and Iceland; addressed “third-wave democratization” by expanding to Spain, Portugal, and Greece; met the “end of global bipolarity” by including Austria, Sweden, and Finland; and embraced a “Europe whole and free” with enlargement in Eastern Europe. Each time, the EU bulked up its territory, but it never provoked other powers. Rather than following a classic geopolitical logic of size, power, and competition, the EU’s past enlargement was done to achieve stability through a technical process of market expansion and policy transfer. Although the return of power politics to Europe has left the EU bulky, directionless, and vulnerable, it is again turning to further enlargement.

Pro-enlargement Poland is now pressing the EU to embrace the narrative of a clash of civilizations that it says has always been below the surface when debating this issue. Since Russia invaded Ukraine, EU governments have, by their actions, given weight to this narrative: Dealing with 5 million refugees from Ukraine, the EU chose to apply the Temporary Protection Directive, the law that recognizes a whole group prima facie as deserving protection. This law was drafted following the wars in Yugoslavia, but it was never used – not even for the Syrian refugees flooding Europe in 2015. If the EU is a community of values, these voices say, then these values are not going to be realized by technical half measures but must be asserted.

And yet, the “return of geopolitics” argument has split the pro-enlargement camp because it also strengthens the case against enlargement. Countries like France that have historically put a brake on enlargement – often out of fear of a loss of national influence – can now cite classic Realpolitik to urge a cautious line. They can point to the dangers of “European overstretch,” arguing that, when the EU needs to be more unified and top-heavier, with smaller member states giving up their veto and bigger member states taking more of a leadership role, enlargement would mean political fragmentation and even “over-expansion.” The EU should not repeat NATO’s historical miscalculations: NATO provoked Moscow by enlarging into a zone where Russia has “vital interests,” rhetorically committing the Alliance to an open door policy that it had no intention of realizing.

France’s Equation: A Package Deal to Lift the Unanimity Rule

French President Emmanuel Macron has now proposed a concept, European Political Community (EPC), to create an outer tier for accession hopefuls, involving them in some policies but without voting rights. This new concept comes with the disclaimer that it is not a permanent alternative to EU membership. Yet France’s earlier proposal for the EU to pursue “European autonomy” serves as a cautionary tale: while it claimed that it was neither protectionist nor anti-US, it was both. Thus, it seems likely that existing and future EU candidates will find themselves in an EPC gutter. Whatever the geopolitical arguments for enlargement, the political math favors the skeptics. The enlargement process is mired in veto points and complex package deals that can seemingly only be overcome by changing the treaties.

Germany and Italy, supporters of the classical enlargement logic, have perhaps been too quick to accept that they do not have the political math to unblock enlargement. This is understandable: Fifty years of enlargement has led to political gridlock on big issues, including further enlargement itself. And yet, contrary to widespread impressions, removing the veto and moving enlargement decisions to Qualified Majority Voting (QMV) is already possible under Article 31(3) of the Treaty on European Union. Since 2005, the EU has moved ahead in just this way – by crisis rather than by treaty change, exploiting unused slack within the existing treaty framework. It can potentially do the same here.

Russia’s war on Ukraine certainly provides a crisis to spur both external and internal action, thereby opening a vista for internal EU reform. The prime bugbear of states like France that want quicker EU decision-making is the number of Commissioners. Accession countries could accept the provisions of the Lisbon Treaty that cap the number of Commissioners at two-thirds the number of member states and refrain from requesting to have a Commissioner themselves. They could also forfeit their conditional right to exercise their veto power in the initial phases of accession. In doing so, these countries would increase French momentum toward a European Commission consisting of only 15 members – an idea that was set out by President Macron in his 2017 Sorbonne speech and confirmed in the 2018 Meseberg declaration.

Any such package deal driven by crisis could also be embraced by EU member states from Central and Eastern Europe that have been skeptical about applying QMV to this or any other field. Most worry that giving up their right to veto will rob them of influence in the EU, strengthening the influence of big Western members. A small minority – including, for example, Bulgaria – wish to retain QMV in enlargement to give vent to their strong bilateral grievances. But their support for further enlargement has exponentially increased after Russia’s invasion and Ukraine’s subsequent request for candidate status. They also fret about blowback from the Balkans if countries from that region are now neglected. They have an interest in streamlining EU decision-making to achieve progress in enlargement.

The Geopolitical Counterargument: The EU Can Achieve Cohesion Through Enlargement

Germany and Italy have been too quick to accept the idea that enlargement leads to political gridlock. In fact, as the above examples show, it can have just the opposite effect. Both EU members and the majority of the Western Balkan hopefuls responded to Russia’s aggression by supporting candidate status for Ukraine, Moldova, and Georgia. This reaction suggests that cohesive widening is not only possible but also necessary given the new geopolitical reality. Indeed, it is refusing to widen the European Union that leads to more fragmentation. While skeptics will say that the EU cannot take in more “basket cases,” accession hopefuls are in fact cementing into basket cases as they are made to wait outside the EU’s doorstep – many of them more prepared for membership a decade ago than today.

On those past occasions on which enlargement has led to political fragmentation, it could have been overcome – again, by removing national vetoes. Take, for example, the EU’s lack of cohesion when it comes to foreign policy. Small “new” EU members such as Malta or Cyprus have insisted on maintaining a veto in foreign policy for fear of being dominated by bigger member states. They have then used that veto to block EU action, including sanctions. Taken at face value, this experience serves as grounds for the EU to be cautious about taking in many more small states – those of the Western Balkans would presumably show a similar lack of discipline. And yet, the real reason why Malta and Cyprus have acted in this negative way is often overlooked. They do so because the targets of sanctions, large outside powers like Russia or Turkey, know that these small EU members have the power of the veto and can be bullied into exercising it. In real terms, therefore, the unanimity rule in the European Council makes small EU members less powerful, not more. Lifting the veto would not leave small members open to domination by big ones; rather, it would create a cohesion of purpose.

And it is not just outside powers like Russia that exploit this advantage. EU members also misuse their veto rights to gain concessions from individual candidate countries on issues that have nothing to do with the enlargement criteria – this, too, undermines the legitimacy of their governments and makes them ripe for external influence. Although EU members had made clear that they see North Macedonia as a future EU state and were ready to set the accession requirements without any preconditions, this move was blocked by Bulgaria. Indeed, this kind of maneuvering has blocked the EU from reaching any significant decisions on enlargement in recent years. Its last major positive decisions were made in June 2017 when it closed negotiations on chapter 30, external relations, with Montenegro. Subsequent decisions on enlargement, such as the one on the new methodology for accession negotiations, have in fact produced new blockages.

The French notion of a multitiered European Political Community and its thinking of enlargement by seeking alternatives to it already exist de facto. There are plenty of alternatives to EU enlargement policy through which the EU engages with its neighbors and has ratcheted the Western Balkans and Eastern Europe to itself. Moldova, for example, is one of the three new eastern enlargement hopefuls that has benefited from tools outside the enlargement toolbox. Thanks to EU trade initiatives, only 14 percent of its exports were going to Russia and Belarus when war broke out. Moldova now hopes for similar support from the EU in reducing its trade tariffs on agriculture and helping with its energy infrastructure proposals.

How to Apply the New Geopolitical Math in the Western Balkans

As we mentioned at the outset, each previous EU enlargement had a motif. The guiding rationale for this one could be unfinished business – achieving the continental integrity that was first broached in 1990 but then neglected due to complacency. The countries of the Western Balkans, which have been in the EU’s waiting room for more than twenty years and have seen motifs come and go, have especially been victims of this complacency. Now, once again, they risk losing out as the attention of the international community has been drawn to Eastern Europe. Consequently, these countries are experiencing further political fragmentation, reform fatigue, and increased emigration to the EU while their governments have begun looking for other external backers.

Careful political math and a refined geopolitical rationale are needed to revive political will in the EU for Balkan enlargement. If the Balkan countries did agree to become members with conditional voting rights until they prove their capacity to maintain and implement all membership criteria, it would feed perfectly into the narrative that the EU is not a place for basket cases or those who disrupt decision-making. With Brexit, a large member state of approximately 70 million citizens has left the Union, thus vacating positions in its institutional infrastructure that are of great importance in terms of absorption capacity. In short, the United Kingdom had far more capacity to block EU initiatives than any of the Western Balkan countries – with a combined population of no more than 18 million that is currently shrinking – could ever have.

For this reason, the issue of the EU’s capacity to “absorb” the countries of the Western Balkans within it has become obsolete. And the numbers on which proper enlargement calculations must be based are in flux. There are currently 5 million Ukrainian refugees in the EU with more to come as Russia’s war drags on. This represents an EU population size about one third of that of the Western Balkans. Thus, there are already small groups in Europe that will influence EU policies without being integrated in legal and political terms.

Together, the catalyst of a new geopolitical reality combined with a broader necessity to move toward QMV in foreign policy will shift the political calculus in the EU in favor of Germany and Italy and allow them to make a comparatively strong case for enlarging the Union to the Western Balkans and beyond. 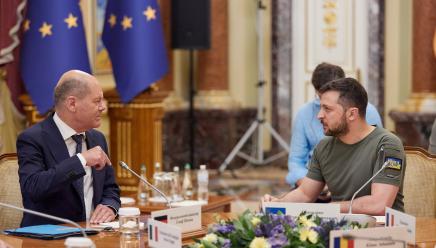