On a superficial level, Poland’s dispute with the EU concerns only one government rebelling against the European rule of law. But in its crackdown on judicial independence, the ruling Law and Justice party (PiS) harms not only Poles but all EU citizens — as well as foreign companies in Poland that depend on impartial application of the law.

Last month’s decision by the PiS-controlled constitutional tribunal that parts of the EU’s basic treaty are incompatible with Poland’s constitution is spreading contagion. Poland is beginning to serve as an example even for mainstream European politicians, as evidenced by the rhetoric of rightwing presidential candidates in France. Meanwhile, Russia’s politicians and state-run media, rarely sympathetic to Poland, are cheering the PiS-led assault from the sidelines.

EU leaders such as Angela Merkel, Germany’s outgoing chancellor, still seek dialogue. But Jaroslaw Kaczynski, the PiS leader, is intensifying the conflict. He is ignoring the fines of €1m a day imposed on Poland by the European Court of Justice for not complying with an EU order to suspend a mechanism for disciplining judges. Poland’s government shows no sign of relenting in its attack on judges who defend judicial independence.

Perhaps European politicians are surprised by how events are unfolding because they assume that Polish politics operates in a rational manner. Yet in the 19th century, when liberalism was taking root in western countries, Poland dreamt of a messiah who would reinstate the national independence lost in the 18th-century partitions.

In Poland, the highest office is not that of president or prime minister but that of national saviour. This is why Kaczynski does not need an important government post in order to hold full power. Unlike Viktor Orban, Hungary’s prime minister, he does not care about money, honours or international prestige. Kaczynski does not even have a bank account or a driver’s licence. He is not interested in meeting leaders of other countries.

Every Polish leader, from Jozef Pilsudski to Lech Walesa and Pope John Paul II, and now Kaczynski, has been treated in this country as a demigod or miracle-maker. Even Donald Tusk, the former Polish premier and European Council president, is perceived in this way by his liberal electorate. He returned to national politics precisely because he aspires to the role of defender of an oppressed nation.

What is happening in Poland is more than mere political rivalry.

What is happening in Poland is more than mere political rivalry. It is a war between government and opposition. The courts, the media, money, foreign policy — all are useful resources in wartime. It is the courts that certify election results in Poland, and only courts can block decisions made by politicians.

This is why Kaczynski has always been obsessed with the judiciary. His priority is not the economy or even national security. It is the preservation of power — that is to say, victory in the next parliamentary elections, scheduled for 2023.

Some European leaders speak of withholding EU funds from Poland, but PiS is braced for that outcome. The ruling party is already trying to figure out how to replace EU money with public debt. Besides the official deficit, there is a growing unofficial deficit that does not fall under parliamentary oversight and arises from bonds issued by BGK, the national development bank, and the state-owned Polish Development Fund.

The government of Mateusz Morawiecki, prime minister, may offer the EU apparent concessions such as abolishing a disciplinary chamber for Supreme Court judges. But if the EU releases funds to Poland in return, he plans changes to Poland’s three-tier court system that would enable PiS to replace insubordinate judges at regional and district level.

European leaders should take little comfort from the fact that most Poles support EU membership. When asked who is in the right, the Polish government or the EU, 41 per cent think the government should accept the EU’s conditions, 32.5 per cent favour a limited compromise and 23 per cent want no concessions at all.

The only way to combat Kaczynski is to fight fire with fire. Financial pressure makes sense, if it is comprehensive and consistent. Many PiS voters are keen on the government’s lavish social expenditures. But spending on this scale cannot last for ever, and a block on EU funds could hit the government’s popularity. What is clear is that endless dialogue between the EU and PiS will not help ordinary Poles — and it may inflict terrible damage on the EU, whose standing depends on respect for its laws and values.

This text was first published by Financial Times on November 4, 2021. 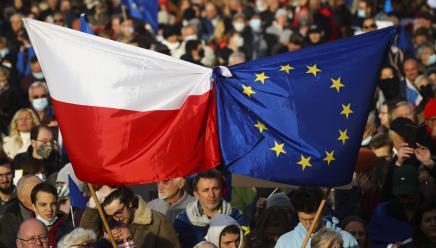