Despite the fact that there is a massive land war raging just across the border, Poland's ruling Law and Justice (PiS) party has decided that now is a good time to revive the decades-old issue of German war reparations. In doing so, PiS has once again put its own interests first.

Ever since Russia invaded Ukraine on February 24, Poland has received daily threats from Russian propagandists that it will be next. Yet despite these high stakes, Poland’s Law and Justice (PiS) party government has decided to start a fight with Germany – one of our closest allies – by demanding huge war reparations for the destruction caused by Hitler’s Third Reich.

On September 1, the anniversary of the outbreak of World War II, PiS Chairman Jarosław Kaczyński presented a report that puts the sum of Poland’s wartime losses at $1.3 trillion. While PiS has been talking about reparations since it came to power seven years ago, this is the first time that it has broached the topic with Germany. In fact, the issue is both formally and morally unambiguous – and the correct policy lies in the opposite direction.

After World War II, the Allies decided that injured parties would receive material, rather than financial, reparations. German factories would be dismantled and relocated, or work done by the Germans would benefit the aggrieved states, which were divided into an 18-country “western mass” and an “eastern mass” comprising the Soviet Union and Poland. The eastern mass took its share mainly from the Soviet occupation zone in eastern Germany.

Poland was to receive 15% of this share, and on August 16, 1945, the governments in Warsaw and Moscow signed an agreement to regulate the transfer of reparations. The USSR was to receive up to $10 billion (at 1938 prices), but historians estimate that it eventually took $3-4 billion – about one-third of East Germany’s potential production. By this time, the USSR was also already dismantling and looting assets that had been set aside for Poland under the Potsdam Agreement.

The Kremlin then imposed a harsh condition on Poland: To receive its due share of German reparations, Poland would have to produce and export its coal to the Soviet Union at an extremely low price. In the event, this arrangement proved to be more costly than the reparations that were coming in. In 1957, Poland agreed to forgo collecting any additional reparations in exchange for ending the ruinous export condition. The allocation of German reparations for Poland had been a sham. Of the $3 billion that the Soviets had collected (in the form of factories, ships, cars, motorcycles, bicycles, and rolling stock), Poland received only $225 million (7.5%).

Then, in December 1970, Poland reaffirmed its renunciation of reparations claims under a new agreement with West Germany, which recognized the Polish border on the Oder and Neisse Rivers – in what had been pre-war Germany. Without this acknowledgement of post-war borders, the very existence of the Polish state would have been called into question.

Formally speaking, then, the question of reparations is closed. Moreover, the Polish constitution makes clear, in Article 241, that “international agreements concluded in accordance with the previous constitutional order (including under the 1952 Constitution of the People’s Republic of Poland) are treated as ratified international agreements with prior consent expressed by law.” Citing the same documents, the German government also considers the subject closed.

To be sure, Germany does indeed owe a large historic debt to Poland. German aggression in WWII caused unprecedented destruction, including the total destruction of the capital, the erasure of innumerable Polish cultural artifacts, and the deaths of six million Polish citizens (including three million who were Jewish – a fact that Kaczyński does not bother to mention). Making matters worse, the conclusion of the war forced Poland under the Soviet boot, depriving it of independence and development for the next half-century.

Anyone who visited Poland in 1989 will recall how poor, gray, and ugly the country was after four decades of communism. Traces of this dismal legacy are still ubiquitous today.

On the other hand, one also must acknowledge that Poland’s economic success over the past three decades would not have been possible without Germany, which was also the most enthusiastic advocate for Poland’s accession to the European Union and NATO. Yes, many Polish banks and companies are owned by entities in Germany, which is thus where the profits go. But such arrangements gave Poles access to the capital they needed to lift their country out of ruin. These mutually beneficial exchanges have fostered a spirit of reconciliation and benevolence between the two countries.

Against this backdrop, Kaczyński’s demands for reparations have evoked withering criticism everywhere except in the PiS-controlled media. Many see yet another example of the exceptional backwardness of a man who is famous for dwelling in the past. But Kaczyński apparently believes that issuing such demands will improve PiS’s position ahead of next year’s general election. And, of course, raising the issue now is a helpful distraction from the government’s struggle against rampant inflation (now over 16%) and sky-high energy prices.

Still, Kaczyński has let the genie out of the bottle. On September 14, the Sejm (parliament) adopted a resolution, signed even by most opposition MPs, calling on Germany to pay compensation. There are two fundamental differences. First, there is no talk of reparations (formally unobtainable), but of compensation for losses. Second, the resolution was supported by the opposition, including Donald Tusk’s liberal Civic Platform and the Left, led by Adrian Zandberg, who said that “only a teaspoon was left of his family’s property.” As a Civic Platform MP explained, “A new Polish government will be formed next year to handle these matters properly.”

Kaczyński doubtless was hoping that the opposition would renounce all Polish claims to reparations. By apparently joining the bandwagon, Civic Platform can undercut his electoral strategy. But this also means that the issue has begun a life separate from and beyond what Kaczyński intended. The outcome is uncertain, but, paradoxically, the best safeguard for Germany may be Kaczyński himself, whose outrageous and legally dubious proposals for resolving such issues cannot be taken seriously.

This text was first published by Project Syndicate on September 19, 2022. 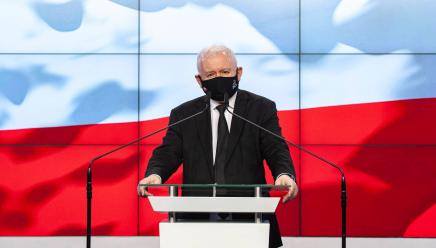