If Ukrainians often seem to be resigned to the inevitability of war, that is because they have already been fighting Russia for eight years. What Western political leaders are finally starting to realize is that if they are to preserve the post-Cold War settlement in Europe, they, too, must think like Ukrainians.

For international observers, Russian President Vladimir Putin either will start a new war in Ukraine or he will not. But for Ukrainians, the war started when Putin annexed Crimea in 2014, and it has continued ever since. Thousands of Ukrainians already have experienced armed struggle against Russian forces. That is why politicians in Kyiv are not preoccupied with guessing what Putin will do next; they are focused on what they must do today.

The Ukrainian mindset reflects a sober assessment of the country’s capabilities, resources, and influence. Ukrainian leaders understand that they must prepare the army, reduce the economic impact of the crisis, and find as many allies as possible. They are not picky about receiving assistance from the West. They will accept any assistance gratefully, knowing that even small contributions could prove decisive.

Although Ukrainians must prepare for war, they have peace on their minds, because that is what they have been fighting for these past eight years. They don’t quibble much about whether the war will be big or small, fought from the air or on land, or waged around cities or in the countryside. One gets the impression that they are more optimistic than the situation warrants. As one top defense expert told me, “Sławomir, I have three daughters, the youngest is a year old. How can I not be optimistic?”

Meanwhile, Western media outlets generate more analyses, predictions, and opinions than any one person could read, even though the facts point to both the inevitability and the futility of war. Putin must attack because he will lose face if he doesn’t. Now in the last phase of his long reign, he has concluded that his legacy will suffer an irreparable blow if he does not leave with Ukraine in Russia’s firm grasp.

He also knows that this is his last, best chance. The United States is busy with China. Germany has a new, untested government whose leading party tends to be friendlier toward Russia. French President Emmanuel Macron is busy trying to win re-election. British Prime Minister Boris Johnson is on the verge of losing power. And Europe, more broadly, is licking its wounds from the pandemic and remains hopelessly dependent on Russian gas.

Moreover, having modernized its military instead of its economy, Russia must strike while the iron is hot. Putin has accumulated an astronomical $620 billion in foreign-exchange reserves, weaned the economy from its dollar dependence, and repatriated oligarchs’ assets, all to prepare for this moment. The economic conditions for supporting an invasion will not be so favorable again anytime soon.

Above all, Putin knows that if he backs down now after two mass military mobilizations, the West will no longer have to take Russia seriously. NATO will continue to strengthen its presence in Eastern Europe, and the US will shelve whatever concessions it might have offered. Ukraine obviously is moving inexorably away from Russia. In fact, whether Ukraine formally joins NATO or not is becoming less important every day because it is de facto part of the Alliance. It has adopted NATO standards in its military modernization and accepted arms supplies.

From the Kremlin’s perspective, Ukraine is already acting like a member not just of NATO, but also of the European Union. With every passing year, it further consolidates its statehood, secures its own identity, and deepens its ties to the EU – its largest economic partner. Ukraine is part of the EU’s common market and visa-free regime, and it has even achieved energy independence from Russia – something that would have been unthinkable not so long ago.

But Putin really does view Ukrainians as Russians, as he wrote in his manifesto – perhaps slightly worse versions, but Russians nonetheless. And Putin’s allies have gotten the message. Even Ramzan Kadyrov, Chechen, have begun to refer to Ukrainians as 'our nation'.

Still, what would Russia gain from going to war? There is no chance of a blitzkrieg or a swift, decisive victory that leaves Russia with permanent control over Ukraine. Ukrainian nation strongly prefers a war to a rotten peace, and they are by no means resigned to defeat. They do not expect to win a military contest with Russia outright; but they are confident that they can put up enough resistance to convince Russia that they are unconquerable.

The Western response will be the same regardless of whether there is a small-scale war or a large-scale one. Either way, another Russian attack on Ukraine would destroy the entire post-Cold War settlement in Europe. Large-scale wars between national armies and occupations would again become the norm. The West finally seems to have realized that it cannot allow this.

After weeks of Western dithering, even Germany has finally stopped discussing the importance of Nord Stream 2, the pipeline that would deliver natural gas directly to Germany from Russia, bypassing Ukraine. And the United Kingdom has prepared sanctions against Russia’s oligarchy, which has long used London as its playground and financial haven.

In light of these developments, Kremlin strategists must consider whether success in Ukraine is even still possible. War makes sense if there are long-term benefits to be gained once it is over. Can the 40 million Ukrainians who have endured eight years of war with Russia really be forced to be loyal to the Kremlin? Can the second-largest country in Europe really be occupied and then pacified? The US fiasco in Afghanistan showed that wars are much easier to start than to finish. Russians doubtless recall their own disastrous experience in Afghanistan, which contributed to the Soviet Union’s collapse.

The West has at last stopped guessing what Putin will do and entered a new phase. It has started to think the way Ukrainians do. Russia ends where it is stopped.

This text was first published by Project Syndicate on February 4, 2022. 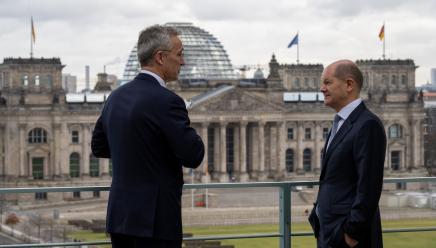