The European Union’s stance towards the crisis in Libya is bewildering – at least without deep background on Europe’s workings. The EU classifies problems and players in odd ways, and the way it links them up is odder still. Libya is a complex problem in its own right, but the EU treats it through three broader complexes: one around the integration of its regional market, one around the transformation of the Arab world, and one around its attempts to find a modus vivendi with Turkey.

Each has involved an effort by the EU to reform other countries, and each has failed for the same reason: The EU pictures itself as the main pole for neighboring regions, meaning it both underestimates the shift of power away from Europe and overestimates the risk of attracting migrants. Ultimately this makes its fears of being overwhelmed by migrants self-fulfilling, because instead of working with emerging international partners, it surrounds itself with a buffer of oppressive autocratic regimes.

This chapter explains those three complexes in turn, each time picking out four key characteristics. It ends by showing how they have culminated in a readiness for the EU to get “geopolitical” — not in Libya, which genuinely requires its geopolitical engagement, but rather vis-à-vis Turkey, whom the EU accuses of weaponizing migration flows all along its southern flank.

This text was first published on December 1, 2020 by the Foreign Policy Research Institute as part of The Eastern Mediterranean and Regional Security: A Transatlantic Trialogue series. 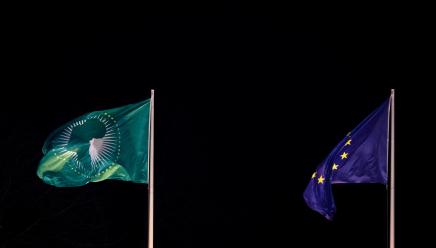