This text contains footnotes in its original publication by the Istituto Affari Internazionali.

When the October 2020 summit between the European Union (EU) and the African Union (AU) was postponed, leaders blamed the pandemic. Yet, there was a sense that the issue went deeper. Both sides still resent the other’s handling of what Europeans refer to as the “migration crisis” of 2015. AU officials complain about the EU’s divide-and- rule approach to managing migration, while their European counterparts allege that AU officials encouraged African states to leverage migration flows to extort cash.

Yet migration remains an area where the EU and AU policy agendas are in fact broadly aligned, on paper and in political rhetoric at least. The AU has adopted a free movement protocol and is looking at mobility to strengthen the continental labour market and promote intra-African capital flows. The EU has lent its support to the project, keen to build bridges with Africa on a traditionally divisive issue.

But the EU’s policies have hardly matched its rhetoric. Europe’s commitment to free movement in Africa is only skin- deep because it is based on three faulty rationales. As a result, it buckles and breaks when faced with the complexities of the real world. Below we seek to re-examine the EU’s thinking – and in so doing reveal a more compelling argument that will convince policymakers to take real action.

Brussels believes that increased migration opportunities within Africa will reduce migratory pressures on Europe. In West Africa, for instance, 70 per cent of all migration takes place within the region, with only a small number of migrants heading north across the Sahara. Of those who do move northwards, the majority settle in the Maghreb.

Indeed, even at the height of the EU’s “migration crisis”, only an estimated 20–30 per cent of migrants intended to continue on to Europe. Thus, the logic goes, greater opportunities for migration within Africa will mean fewer migrants crossing the Mediterranean.

With regards to geopolitics, the EU sees cross-border mobility as a means of shielding Africa from outside powers like the US and China. These global powers have proven adept at playing divide and rule in Africa, encouraging the continent’s elites to bid against each other for military protection or investment in connectivity. In return, both the US and China demand access to valuable territory and resources.

A desire to set global norms provides a third conceptual basis for the EU’s avowed support for free movement in Africa. When European states clubbed together in the 1980s to build their own free movement regime, they imagined themselves as the vanguard of a new era, establishing important global norms.

Today, Brussels once again imagines a future where EU-style regional labour markets spread across the globe. EU officials believe that this kind of regional integration in Africa, Latin America, East Asia and the Gulf will create a new layer of global governance.

The truth about European self-interest

In reality, it seems unlikely that free movement in Africa will have any great downward effect on migration to Europe. The Economic Community of West African States (ECOWAS) adopted a free movement protocol in 1979 – and yet its member states contributed over 30 per cent of irregular migrants to Europe in 2016.

Forty years in, ECOWAS member states’ national laws still conflict with the protocol, and people cross borders without being fully apprised of their rights. As a result, free movement has few tangible advantages and does little to prevent onward migration.

Increased mobility in Africa could even lead to an increase in migration from Africa. ECOWAS was one of the flashpoints of 2015. European diplomats felt West African leaders were exploiting the mobility regime to push their nationals towards wealthy Europe, systematically closing consulates along the way to discourage people from turning back. Africa-wide free movement would likely produce more of the same.

Another immediate concern for the EU is that it would have to desist from buffering practices in Africa. Since 2015, it has redirected development aid towards border security, particularly in Niger, an ECOWAS member state. These undermined decades of work convincing the country’s security-minded authorities of the benefits of mobility but, for Europe, it was effective. Now, both the EU and Niger are loath to reverse course.

The truth about African geopolitics

Even today, EU officials tend to imagine Africa as the object of outside actors’ geopolitical manoeuvring, and think AU states need Europe to help protect them. But the reality is that African governments are equally capable of playing geopolitics, often exploiting rifts within Europe itself.

Moreover, the EU is not so different from other global powers that aim to build African cohesion, but only insofar as it helps lock out geopolitical rivals and secure privileged access to the continent for themselves. China invests in physical connectivity, but leverages its investments to extract fishing rights from weak littoral states. The EU, meanwhile, employs lofty rhetoric to promote cross-border cooperation, but it undermines its efforts by isolating individual states to use as buffers against migration.

This has not gone unnoticed by African leaders, who are increasingly playing the game. African states – in particular regional heavy-hitters like Nigeria and Ethiopia – know how to use the continent’s overlapping efforts at regional integration to their advantage, defining their approaches to the integration of trade, capital and – of course – labour movement.

They do so at Europe’s expense, exploiting the bloc’s internal divisions. During the “migration crisis”, Egypt and Sudan purposefully fed Europe’s migration anxiety in the hopes of extracting a “Turkey-style” deal and boosting their status in the region. Others proved apt at securing investment by playing the EU off against its own member states.

More recently, anglophone Nigeria and francophone Côte d’Ivoire have begun exploiting Anglo-French competition for post-Brexit influence in West Africa as they jostle for regional leadership. And Morocco – an important transit state for migrants – has positioned itself as kingmaker.

The truth about global norms

The EU likes to imagine African integration as the result of its own norm-setting influence. But in fact, it is in large part a reaction against it. Regional integration in Africa has always been driven by the continent’s post-colonial desire to shake off outside influences. And the mobility agenda is no different.

African states feel that migration has been weaponised against them, providing outsiders with a pretext to thrust upon them unwanted interventions. Their aim is not to follow Europe, but to work together to forge an alternative.

In truth, Europe promotes its own model of regional mobility because of its weaknesses more than its strengths. Schengen was conceived as a way for Europe to deepen its customs union, reducing delays for freight at international borders. It had few implications for intra-EU migration because Europe’s labour markets remain discreet and there is relatively little mobility.

Not only is this model ill-suited to a high-mobility region like Africa, it has left the EU without a collective capacity to absorb immigration from beyond its borders, while migrants are free to choose their destination. To overcome this vulnerability, the EU strives to build labour regimes in their regions of origin.

Tellingly, the EU’s successes in promoting regional free movement in Africa have been achieved more by accident than by design. The Khartoum Process was built on the template of the much less successful Rabat Process. Quite by chance, this time the EU got things right.

It brought to the table the right mix of countries: Kenya and Uganda, with their reputation for integrating refugees; Tunisia, which could help out isolated francophone Djibouti; and Egypt and Sudan, whose quarrel with Ethiopia had caused diplomatic gridlock with its neighbours. The result was to reinvigorate regional cooperation in the Horn.

All three rationales share the same core weakness: they place Europe at the centre of the world – as a destination for migrants, a geopolitical actor or a normative leader. The reality, however, is that Europe’s importance to Africa has been diminishing for more than a decade.

The 2008 financial crisis in particular gave Africans a reason to look for new partners. Recognising that Europe is not Africa’s prime pole is key when dealing with a continent keen to find its footing in the world.

This was in evidence during talks at the UN on the Global Compact for Migration. European leaders had initially looked upon this initiative with scepticism, wary of being forced into commitments to open up to African migrants.

Much to their surprise, African states supported EU positions on border controls, readmissions and returns. Even as they underlined the importance of migration for development, they recognised the need to control it.

The reason is simple: the lines between countries of immigration, migration and transit are blurring. Migration patterns are changing – and as young Europeans begin to look to emerging markets for new opportunities, they could even go into reverse, with Europe demanding better governance on migrant rights and former countries of origin fretting about border control.

There is a growing convergence between Global North and Global South, and with it comes the need for new forms of problem-solving. As such, Europe should recognise the benefits of African mobility in and of itself.

Regional mobility will not meaningfully reduce migration to Europe, it will not shield Africa from geopolitics and it will not bring about a global convergence around European norms. What it will do is allow Africa to forge its future on its own terms. If Europe wants to earn itself a favourable position in the region, now is the time to act.

The EU should support African mobility precisely because it is not the centre of the world.

This text was first published by the Istituto Affari Internazionali as IAI Commentaries; 20|85 in November 2020. 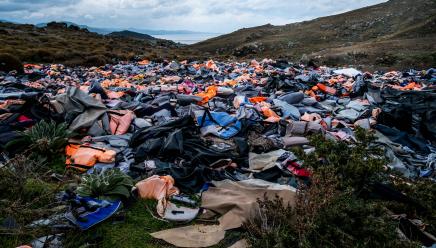 Migration, borders, and the EU’s geopolitics