The Western populists who have spent years undermining democracy at home have been weakened by Russian President Vladimir Putin’s war of aggression. While those with pro-Russian leanings have been marginalized, those who have come out in support of Ukraine have been welcomed back into the fold.

Russia’s war in Ukraine has affected political life in countries around the world, and this influence has been greater in the countries that are politically closest not to Ukraine but to Russia. Because Ukraine is a democracy and Russia is an authoritarian kleptocracy, the war has highlighted a fundamental clash between alternative political systems. This dynamic raises the stakes considerably, because a military defeat for the democracy could be an invitation to dictators elsewhere to pursue their own conquests.

Fortunately, as the war has dragged on, the specter of populism has receded in Europe, where it has been overshadowed by the larger threat of a Russia victory. While those populists with pro-Russian leanings have been marginalized, those who have moderated and come out in support of Ukraine have been welcomed back into the fold, despite having spent years undermining democracy at home.

For example, before the Russian invasion, Polish President Andrzej Duda was receiving a cold shoulder just about everywhere in the West. Yet his staunch support of Ukraine has turned him into a key participant in major transatlantic and European meetings, and an important partner to anti-populist Western politicians, not least US President Joe Biden.

At the same time, Duda himself has become less populist. Never an independent thinker or politician, he now takes his cues from the American embassy, rather than from Law and Justice (PiS) party leader Jarosław Kaczyński, to whom he owes his current position. Duda seems to have concluded that Kaczyński cannot hope to reward him with the kind of international profile that the Americans can.

Meanwhile, pro-Russian populists have fallen out of favor almost everywhere. The notable exception is Hungarian Prime Minister Viktor Orbán, who has long convinced Hungarian voters that their country can occupy the best of all possible economic worlds by juggling relations with Russia, China, and the European Union. But even Orbán has had to soften his position. He has not dared to block the bulk of Western sanctions against Russia, because he knows that he must play nice with the EU to receive COVID recovery-package funds that have been withheld as a result of his rule-of-law violations. Orbán is thus in limbo – neither a pariah nor a partner to leaders in Washington, London, or even Berlin.

But the previously ironclad Kaczyński-Orbán axis is finished. Poland is supplying Ukraine with every kind of weapon, including more than 200 tanks; and it has just declared that it will be the first country to furnish German Leopard 2s. By contrast, Hungary not only refuses to help Ukraine, but is also transmitting Russian propaganda through its government-controlled media channels.

As a result, relations between Warsaw and Budapest have chilled, with Kaczyński even criticizing Orbán directly. “We can’t cooperate as before,” he complains: “If Prime Minister Orbán says he doesn’t see exactly what happened in Bucza [Bucha, the site of Russian atrocities early in the war], he should be advised to go to an ophthalmologist.”

When it comes to military, territorial, or economic bargaining power, Orbán cannot hope to compete with Turkey’s illiberal president, Recep Tayyip Erdoğan. While Orbán is still grasping for crumbs from larger powers’ tables, Erdoğan’s international standing has grown overnight. Western leaders must give him what he wants to secure Finland and Sweden’s entry into NATO, and the Kremlin must work with him to prevent Turkey from joining the sanctions and embargoes on Russian raw materials, goods, and technologies.

Turkey’s relations with Russia do not prevent it from having good relations with Ukraine. It is an open secret that Turkey is providing Ukraine with more military support than it lets on. And it was Turkey that negotiated the prisoner exchanges and limited ceasefires needed to unblock Ukrainian exports through the Black Sea.

Importantly, while Ukraine’s defeat is not in Turkey’s interest, a total Russian defeat also is not in its interest. A diminished Russia would reduce Turkey’s clout within NATO, and Turkey is also an economic beneficiary of the sanctions against Russia (despite the loss of millions of regular tourists from Russia and Ukraine). With Erdoğan behaving like a more responsible global actor, he may have markedly improved his chances of winning re-election this spring, despite an economic crisis and rampant inflation that his own bizarre policies helped cause.

While individual populists have either moderated their positions or been marginalized, the broader “populist international” has become more fractured with the loss of its Russian patron. Western politicians can no longer walk around in pro-Putin t-shirts, as the Italian nationalist leader Matteo Salvini once did, or borrow money from Russian banks, as the French right-wing leader Marine Le Pen’s party has done. Pro-Russian and anti-NATO views are no longer acceptable. In 2022, the German pro-Russian parties Alternative für Deutschland and Die Linke lost local elections across the board.

Populists also suffered losses in elections in the United States and France, and Russia’s war of aggression was certainly one reason. Candidates backed by former US President Donald Trump – an open admirer of Putin – were roundly defeated in the US midterms. And in the French presidential and parliamentary elections last spring, Le Pen and the left-wing leader Jean-Luc Mélenchon’s sympathies for Russia did not go unnoticed. If the pro-Russian populist former Czech prime minister Andrej Babiš loses this week’s presidential election to Petr Pavel, the former head of NATO’s Military Committee, that, too, will be partly because of Russia’s war.

But we should remain only cautiously optimistic. The new year could always bring a trend reversal. If fatigue with the refugee crisis and high inflation deepens, today’s discredited populists will be the natural beneficiaries.

This commentary was first published by Project Syndicate on January 17 2023. 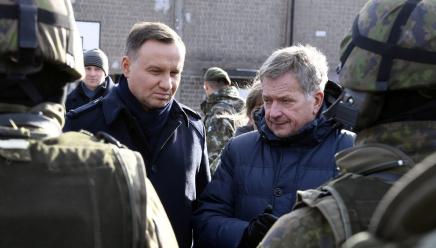 Finland and Sweden joining NATO will strengthen the alliance—and give a boost to the inner-NATO partnership of Northern and Eastern European members. Unlike many in Western Europe, the newcomers fully share Poland and the Baltic states’ threat perception of Vladimir Putin’s Russia.