Migration instrumentalization (MI) ranks as a low-cost strategy for perpetrators, as migrants can be exploited by countries that have few other strategic advantages. Hence, the EU must ask itself how it can raise the costs for its antagonists. This Hybrid CoE Working Paper proposes a taxonomy of MI events to help identify patterns in the way that migration is being instrumentalized. Then, the taxonomy is tested against four recent MI campaigns, and in a third step, the question of how the EU could use such a taxonomy is analyzed.

Below you can read the executive summary of the Hybrid CoE Working Paper.

Migration instrumentalization (MI) ranks as a low-cost strategy for perpetrators: migrants are a freely available “means” of instrumentalization and can be exploited by countries that have few other strategic advantages, pushing people across borders to destabilize or coerce the target state. A small group of repeat offenders like Russia seems surprisingly free to weaponize the EU’s attractiveness to migrants, extorting financial and political concessions for controlling borders. They reduce the risk of incurring international sanctions by pointing a finger at the EU’s well-known problems with achieving a unified response to migration. This paper addresses the dilemma of how the EU can better defend itself against MI.

The guiding question is: How can the EU raise the costs for its antagonists? The EU has thousands of kilometres of land and sea borders, as well as exposed overseas territories, and it is quite easy for neighbours to use its border vulnerabilities to polarize the EU, downgrade its standing, and/or coerce concessions from it. If the EU expends too many resources on defending itself against MI, then its antagonists will have scored a cheap victory, using a freely available source of leverage – distressed humans – to trigger costly defences. Moreover, the EU will almost certainly have spread scarce means in ways that open up new border vulnerabilities to opportunists.

An efficient response from the EU logically starts with a taxonomy – a classification of MI events which helps the EU to identify patterns in the way that migration is being instrumentalized. As a first step, this paper proposes just such a taxonomy. Based on a wide range of examples of MI campaigns directed against the EU in the period from 2014 to 2020, it classifies MI episodes according to the actors behind them. The decision to build the taxonomy around types of perpetrators (rather than, say, triggers or tactics) is based on the finding that this is the key to explaining the other factors. This paper then tests the taxonomy against four recent MI campaigns. Each of the case studies corresponds with one of the four actor types in the taxonomy – the “strong state” (a centralized country which nevertheless lacks legitimate means to influence the EU), the “weak state” (fragile countries that use migration to bind the EU to their vulnerabilities), the “proxy state” (countries that unleash MI campaigns as part of a relationship to a more powerful patron), and the “non-state actor” (criminal gangs and terrorist groups). The four case studies on MI campaigns (Morocco, Ukraine, Belarus, and Libyan militias) confirm the basic accuracy of the taxonomy.

In a third step, this paper asks how the EU should use such a taxonomy if it is to become a practical tool for Europe’s defence. The basic choice facing the EU here is whether to use the taxonomy for proactive or reactive purposes: if the EU has at its disposal a reliable system for understanding how migration is being instrumentalized, should it use this proactively to assess its own risks and mitigate its vulnerabilities, or should it use it to respond to MI campaigns as they arise, quickly ratcheting up the costs? In classic defence terms, this is a choice between “deterrence by denial” and “deterrence by punishment”.

Prevention is usually considered the most cost-efficient approach. Unusually, however, we find that the EU should use the taxonomy to react to, rather than prevent, MI campaigns – it should use its capacity to identify perpetrators quickly, and push them beyond their pain threshold. To this end, it should prepare a toolbox of punitive measures tailored to each of the four actor types. The reason for relying on reactive tools is that, taxonomy or not, MI remains incredibly difficult to predict, not least because perpetrators tend to be opportunistic. Being reactive does not, however, mean ignoring the bigger strategic implications of MI campaigns.

This text was first published by The European Centre of Excellence for Countering Hybrid Threats (Hybrid CoE) on March 8, 2022. 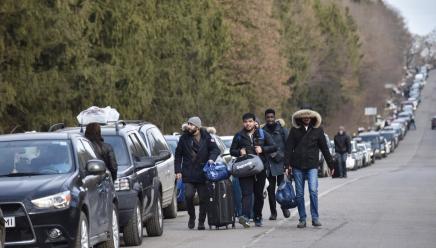 If Russia Uses Migration as a Weapon, Europeans Should Respond In Kind