Within the space of just a few days, Belarus's dictator-president, Alexander Lukashenko, has lost the support of just about everyone, not least his working-class base. With the last holdouts in his regime surely fearing for their future, Lukashenko is quickly running out of options.

At some point, all dictators start to believe their own lies. Belarusian President Alexander Lukashenko is a case in point: he is now behaving as though he really did win 80% of the vote in an election that he himself ensured was rigged.

With peaceful protests sweeping Belarusian cities and towns, Lukashenko, on August 17, visited the Minsk Wheeled Tractor Plant (MZKT) and the Minsk Automobile Plant (MAZ). Each factory plays a vital role not just in the country’s economy but also in its national identity, and both have long served as a foundation for Lukashenko’s power. Anyone who has seen the workers’ housing complex on Socialist Street in Minsk will understand the quid pro quo. For “a man of everyday life,” as the late Polish dissident Jacek Kuroń used to say, these residences are decidedly above average.

Nonetheless, when Lukashenko appealed to these workers this week, he did not hear “We will help,” but rather “Ukhodi!” – “Go away!” or “Get lost!” (Sharper barbs like “Shoot yourself” were also heard). The episode had poignant historical parallels that should concern Lukashenko. When Romanian dictator Nicolae Ceauşescu spoke before a huge crowd of protesters in December 1989, he, too, was heckled and mocked. He fell from power soon thereafter.

The jibes hurled at Lukashenko by workers may have fatally undermined his defense strategy, which is to create the impression that only he can control the situation. The message he has been trying to convey is, “I am the guarantor of stability. You don’t have such a bad life. Don’t risk it.”

This strategy explains why Lukashenko recently made a show of arresting Russian mercenaries in front of television cameras. It is why he has tried to dismiss his electoral challenger and her team as “three girls who have no idea about politics.” And it is why he responded with force to the protests immediately following the election.

But Belarusian society did not succumb to fear. On the contrary, Belarusians from all walks of life have forged a broadening chain of solidarity. As workers have joined with flower-bearing women in white, doctors, and artists, Lukashenko has been caught completely off guard. Equally ominous for his political future, state television workers have joined the mass strikes, and many police officers have cast off their uniforms, with one lieutenant colonel revealing the regime’s plans for pacifying the protests.

Lukashenko’s cold reception at MZKT and MAZ indicates that the falling dominos have now reached his working-class base. The Potemkin rallies that he has staged to demonstrate his support have been drowned out by much larger opposition rallies. The hundreds of thousands of protesters who have flooded into Belarusian city streets have effectively expelled Lukashenko from the country’s most populated areas.

And now, more parts of the country are rebelling, replacing Lukashenko’s barely modified Soviet flag with the white-red-white flag favored by the opposition. The latter now flies even at the iconic Nesvizh Castle.

Lukashenko’s many mistakes suggest that he is not listening to his advisers, most of whom are probably beginning to fear for their own safety. We may be approaching the moment where they start to abandon him, joining the opposition or fleeing the country before it is too late.

The quickest way to overthrow a dictatorship is to break the bonds of loyalty between the dictator and his security apparatus. Division within the power elite is a necessary precondition for change, and it is possible that Lukashenko’s public humiliation before the factory workers has already cost him his credibility with the regime’s defenders.

Moreover, in addition to striking, workers are now joining the protests against the authorities, which is also necessary to break the regime’s spell of control. Doctors have marched on the health ministry to express their discontent. Workers have appeared at the state television headquarters, at the former KGB headquarters, and even before the country’s two most notorious prisons, Valadarka and Okrestina, where political prisoners and detained protesters are locked up. These developments are crucial, because they mean that Lukashenko cannot simply bunker down and wait things out.

The pressure on the regime is now constant and ubiquitous, and the authorities are beginning to panic. When Zviazda, Belarus’s oldest newspaper, announced its own protest against censorship, the information minister showed up at its offices to try to mollify the journalists there. At other media outlets, Lukashenko’s cronies have started seeking pliable journalists to replace those on strike, offering salaries many times higher than the national average. But such gambits only highlight the government’s desperation.

It is important to note that the Belarusian uprising is happening without any clear leaders. Yes, there are influential activists and the opposition presidential candidate, Sviatlana Tikhanovskaya; there is the Telegram blog NEXTA, which is based in Warsaw and has been encouraging steady protests; and there is the opposition leader Maria Kolesnikova, now hiding in Minsk. But the strikes and protests by factory workers, doctors, women in white, and others are all spontaneous initiatives, and it is these organic displays of dissent that have completely undermined the regime’s authority.

At this point, Lukashenko does not know whom to arrest. The striking workers have exposed his helplessness. The women’s protest movement has shown the riot police to be mostly toothless. The entire dictatorship has become a flailing, headless body.

In terms of international relations, a major development this week was the Lithuanian parliament’s decision not to recognize Lukashenko as the legitimate president of Belarus. For its part, Russia has not been eager to intervene. Previous democratic transformations in Armenia, Moldova, and Georgia have already shown that Russia can secure favorably inclined post-dictatorships within its sphere of influence at no cost. Continuing with Lukashenko in power, however, will only guarantee more trouble for the Kremlin.

The louder Lukashenko’s calls for Russian President Vladimir Putin’s help, the louder Putin laughs. For now, Putin is dispatching trolls, not tanks, to Belarus. In just 24 hours, Lukashenko has been transformed from a desperate dictator into a pathetic, pitiful King Lear raging on his heath.

This article was first published by Project Syndicate on August 19, 2020. 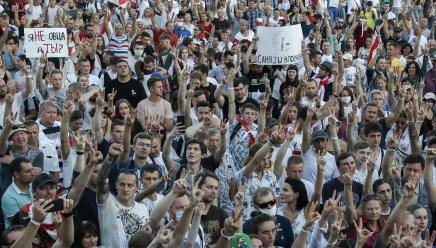 The Cracks in Belarus’s Regime Are Multiplying