The recent incident in which the Belarusian authorities forced a Ryanair flight to land in Minsk so they could arrest an opposition activist has geopolitical significance, and so will the strength of the EU’s response. Other authoritarian regimes contemplating similar actions will be watching to see if the EU sends Minsk a message that is harsh enough to deter copycat behavior.

On May 23, after forcing Ryanair flight FR 4978 to land in Minsk, the Belarusian authorities arrested two of its passengers: opposition journalist and activist Roman Protasevich, the founder and former editor-in-chief of the opposition Telegram channel NEXTA, and his girlfriend, Sofia Sapega, a Russian citizen. Over the next two days both were forced to “confess” to alleged crimes in staged video messages. Charged with terrorism and extremism, Protasevich is likely to face a lengthy imprisonment and he remains in grave physical danger while in custody.

Why Belarus Broke the Taboo

Protasevich has long been of special importance for the Belarusian authorities and for President Alexander Lukashenko. Those involved in the decision to intercept the Ryanair flight he was on presumably calculated that his high value outweighed the risks of such an unprecedented action.

The 26 year-old Protasevich is much more than a journalist. He has been active as an opponent of the regime since he was in high school, taking part in the protests surrounding the 2010 presidential election. He was arrested for the first time a year later and subsequently expelled from university. In 2019, he felt obliged to flee Belarus. In 2020, Protasevich started running the NEXTA Telegram channel together with its co-creator Stepan Putsilo.

During the August 2020 protests, NEXTA became the most-followed Belarusian channel on Telegram. It provided the world with all possible information on the situation in the country and was thus seen by Lukashenko as his number one enemy. From their base in Warsaw, NEXTA’s editors brought to light government abuses. They unmasked functionaries from the KGB security service, the Ministry of the Interior, and the military, using data obtained by hackers or “cyber-partisans.”

Besides collecting, verifying, and distributing information, the NEXTA team published instructions for the demonstrators on a daily basis. These calls caused some controversy within the opposition due to the fact that they remained outside the country and did not face significant risk. As it has now turned out, that assumption was incorrect: Protasevich and his colleagues risked no less than anyone else, and emigration only gave them a false sense of security.

The Implications Stretch beyond Protasevich

The Ryanair incident is an unprecedented challenge to the European Union. The airline is registered in one member state, Ireland; the flight was between two EU capitals, Athens and Vilnius; and the majority of the 126 passengers were EU citizens. The Belarusian authorities not only violated the freedom of an EU company and of dozens of EU citizens; they also put them in harm’s way when, based on a fake claim of a bomb threat, they exploited air traffic control protocols and scrambled a MiG-29 interceptor jet to ensure that the plane headed for Minsk.

The Ryanair incident was worse than a hijacking, something typically carried out by non-state actors with criminal, terrorist, or financial motives. State-organized air piracy is a more appropriate term. It was Belarusian air traffic control that misled the pilots and ordered the plane to turn, and it was the Belarusian military that made it land in Minsk. Hence, the Belarusian state brazenly violated the Chicago Convention on International Civil Aviation and the Convention for the Suppression of Unlawful Acts against the Safety of Civil Aviation (the Montreal Convention), which bans the communication of false information that endangers the safety of an aircraft in flight.

Containing state-organized air piracy is a geopolitical must

But the broader significance of the Ryanair incident is that it may serve as a precedent for other authoritarian states. If Russia, Iran, or Turkey now conclude that they can intercept passenger flights transiting their airspace with no meaningful costs in order to seize regime opponents, that would mean practically the end of freedom of air travel. Hence, the EU needs to make sure that the only precedent the incident provides is that such actions lead to grave consequences for their perpetrators.

The EU’s Reactions so Far and to Come

Within two days, the EU agreed on targeted sanctions, a ban on Belarusian air companies entering EU airspace, and a call for EU airlines to avoid Belarusian airspace. Its objectives are twofold: it demands the release of Protasevich and Sapega, and it seeks to deter similar actions in the future. Such a clear and fast response was not necessarily expected from the EU’s sometimes tortuous internal processes. This matters because the effectiveness of sanctions regimes typically depends on their quick approval.

Yet, things are not so clear-cut as they might appear. The EU had in fact already planned to extend its Belarus sanctions list beyond the 88 individuals and seven entities on it, given  the continued repression in the country, and the sanctions are conditioned on the release of all political prisoners. The next meeting of EU foreign ministers on June 21 will have to decide which further individuals will be listed and the exact design of economic sanctions. The latter in particular will be a measure of the EU’s clout and credibility as a well-designed sanction policy determines the effectiveness of restrictive measures and protects EU sanctions against legal actions.

As Belarus’s second-largest trading partner, with a trade volume of €11 billion in 2019, the EU has a lot of potential leverage. Restrictive measures on exports of refined and crude petroleum and chemicals such as nitrogen fertilizers can hit the regime hard. However, the United Kingdom and Ukraine receive most of the country’s refined petroleum products, worth $5.2 billion. This illustrates the necessity for the EU to coordinate its sanction policy with its partners.

Furthermore, there were already EU sanctions on five Belarusian air companies: the national carrier Belavia and four cargo companies (Transaviaexport, RubyStar, Rada Airlines, and Genex). These measures have inflicted serious losses on Belavia. Last year the company posted a massive deficit due to the COVID-19 pandemic; now it will lose 25 of its 44 destinations. Moreover, many of Belavia’s aircraft are leased, for which it will be unable to pay. The only realistic way for the company to avoid bankruptcy is if Russia helps out, either with a massive loan or by allowing it to open new destinations in the country. However, Moscow rarely gives such concessions without a substantial political price. In that case, a further increase of Russian influence over Belarus would be likely.

No matter how carefully calibrated, economic sanctions will also affect the Belarusian population – and not just Belavia’s approximately 2,000 personnel. The ban on Belarusian airlines crossing EU airspace or landing at EU airports hampers the ability of citizens to leave the country. Already in 2020, Lukashenko partly closed land borders, officially due to the COVID-19 pandemic and again increased border restrictions on May 31. The obvious way for the EU to ease this burden is to complement its sanctions with easier access for Belarusian citizens to Schengen visas and with support for civil society. With a long-term perspective, European Commission President Ursula von der Leyen has offered an economic support package worth €3 billion if Belarus opens up to a democratic transition.

An Opportunity and a Must for a Geopolitical EU

There is not only a pressing need for the EU to react following the Ryanair incident; this is also an opportunity for it to do so in a striking way. EU decision-makers have clearly realized that the proliferation of such actions has to be firmly contained. Belarus is a relatively weak and isolated country the EU has little or no dependence on, but over which it has considerable economic leverage. The EU has not only the willingness but also the means to impose substantial costs on Lukashenko’s regime, at a tolerable cost to itself. Though the political sustainability of the regime will still depend predominantly on Russia’s support, the incident still provides the EU with an opportunity to act geopolitically.

Standing up for the freedom of Protasevich and Sapega, as well as that of the other political prisoners in Belarus is a legal and a moral obligation for the EU. Containing state-organized air piracy is also a geopolitical must. Hence, it needs to deliver a message to Lukashenko’s regime that is strong enough to be heard in other countries as well.

This DGAP Online Commentary was published on June 1, 2021. 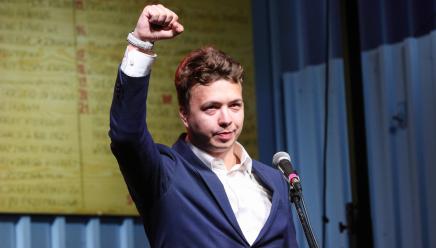