Lukashenko in His Bunker

Sławomir Sierakowski reports on the evolving situation in Belarus from Minsk. After two weeks of nationwide protests following a fraudulent election on August 9, Belarus remains in a state of political upheaval and uncertainty. But one thing is clear: while the opposition has continued to gain momentum, President Aleksandr Lukashenko has increasingly lost touch with reality.

After weeks of nationwide protests over a fraudulent election on August 9, Belarusian President Aleksandr Lukashenko seems to have realized that he has lost popular support for good. His last resort is to radicalize his core base and try to terrorize everyone else into submission.

After being publicly booed by Minsk factory workers last week, Lukashenko has been desperate to regain his standing. The regime has staged “astroturf” rallies, furnishing bused-in lackeys with prefabricated posters to create the impression of a grassroots mobilization.

I attended one such rally in Grodno, a city that has almost completely liberated itself from Lukashenko’s rule. The state media has joined the protesters, the jails have been emptied out, and the authorities have begun to give in to the opposition. In response, Lukashenko has announced that the army will be deployed to bring the city back into line.

On August 22, the regime orchestrated a rally in the city featuring carefully selected speakers, including a worker who rejected the idea of striking, a border guardsman pleading for order to be restored, a representative from the Union of Belarusian Women disapproving of women-led protests, and a child who recited a poem. After these performances, Lukashenko and his entourage, as if in a scene from a Hollywood movie, stepped out of black limousines and moved toward the stage.

Lukashenko is undeniably a good speaker, especially when he is among his supporters. He reminded listeners that his rise to power began in Grodno in the 1990s, when the country was a mess. He referred to the Great Patriotic War – also known as World War II – as if to compare the democratic opposition to fascism. Then he welcomed the new governor (the former health minister), whose predecessor he had just removed. Striking workers, he argued, should be treated the same way.

According to Lukashenko, the interior ministry and the state security committee (KGB) have been tasked with ending the demonstrations. “From Monday,” he promised, “the authorities will be the authorities!” He thanked the riot police (OMON) for their commitment and sacrifices, received a big round of applause, and then left.

The counter-demonstration in Grodno was small, and occurred not next to the Lukashenko rally but near the detention center where striking workers and protesters are being held. The smaller turnout suggests that the regime’s threats are working, at least in Grodno. Belarusian women, however, still refuse to surrender, gathering by the thousands in Minsk, where they demonstrated in front of the KGB headquarters this weekend.

Compared to the earlier demonstrations, this one provoked a slightly different response from the authorities. Warnings and calls to disperse could be heard from loudspeakers, but these were mixed with a selection of Soviet-era songs, over which the protesters shouted. The choice of music was ironic, given that the protesters themselves have started to wave the green-red Soviet Belarusian flag alongside the white-red-white flag of the opposition. The message was that, “We do not want conflict, we are holding our hands out to you.”

Yuri Karayev, the interior minister, had warned beforehand that the military would be deployed against any further demonstrations. People anxiously waited to see what would happen. Not surprisingly, the Internet was shut off again. But, by now, everyone has learned to rely on text messages. That is how the demonstrations have continued to grow, with at least 200,000 people gathering around the Minsk Hero City Obelisk two weeks after the falsified election.

The obelisk has since been surrounded by soldiers (and barbed wire). But, up close, one can see that most are young conscripts who look more scared than the demonstrators do. Cars honked all over the city to show solidarity with the protesters; doctors flashed the “V” (peace) sign from ambulances; post-Soviet protest songs like Kino’s “I Want Changes” and Jacek Kaczmarski’s “Mury” could be heard playing in the background. Everyone was as united and enthusiastic as they had been a week earlier, when Lukashenko was on the ropes and the country was slipping from his grasp.

Once again, Lukashenko’s threats could not help him. The column of demonstrators decided to walk toward the dictator’s kitschy residence, the Palace of Independence, which OMON has cordoned off with everything left at its disposal. The situation seemed ripe for police violence similar to the episode at the Pushkinskaya metro station after the election. But after approaching the armed riot police and looking them in the eyes, the protesters quietly marched on, demonstrating what Václav Havel once called the “power of the powerless.”

As the marchers receded, one could see a helicopter overhead. It was ferrying Lukashenko, who has taken to wearing body armor and carrying a Kalashnikov. Lukashenko is clearly desperate to show that he is in control, but the martial trappings are having the opposite effect. The fact that he has also armed his teenage son suggests that he cannot trust anyone around him and fears sharing the same fate as deposed leaders like Romania’s Nicolae Ceauşescu, Libya’s Muammar el-Qaddafi, or Iraq’s Saddam Hussein.

After the demonstrators had voluntarily marched on, Lukashenko approached the front gate and asked the young policemen there if the protest had ended. It was reminiscent of early 1945, when the leader of the Third Reich tried to act as if nothing was wrong even as Berlin burned. Of course, Lukashenko is not Hitler, and his armed forces have not been crushed by outside powers. But the image of a dictator who has lost both power and a sense of reality is striking nonetheless.

In fact, Belarus may be closer to overthrowing its dictator than many realize. Lukashenko’s displays of strength now convey weakness. And the more ridiculous he looks, the harder it is becoming for even devoted supporters to follow him.

This article was first published by Project Syndicate on August 24, 2020. 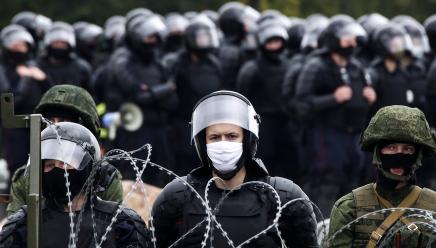