Sławomir Sierakowski reports on the evolving situation in Belarus from Minsk. Although it was always predictable, Belarusian President Aleksandr Lukashenko's threat to unleash a violent crackdown on the country's expanding protest movement represents an ominous harbinger of what may await the country. But Lukashenko may lose his bet on the loyalty of the security forces.

Has this week of massive, mostly peaceful protests against Belarusian President Aleksandr Lukashenko been merely the calm before the storm? Following the fraudulent presidential election on August 9, Lukashenko’s latest statements about the expanding protest movement sound ominous: “There must be no more unrest in Minsk. The people are tired. They want peace and quiet. … The majority is used to living in a quiet country. We have to return this calm country to them.” The fear now is that these unfounded claims will be used to justify martial law.

Lukashenko has also addressed the growing opposition from workers. “If someone in the media – ONT, BT, or elsewhere – wants to go on strike, to go out and then come back, he should not be given that opportunity,” Lukashenko declared. “If you want to leave, leave. But the teams must be preserved. And that is our task today.” The implication is that, beyond martial law, a great purge of state media and other sectors is coming. All those who have not demonstrated that they are loyal to Lukashenko have been put on notice.

In addition to appearing at two major factories, where the workers told him to “Get lost,” Lukashenko this week convened his National Security Committee, which has been tasked with uncovering the supposedly nefarious financing behind the protest movement. It doesn’t matter “how difficult it is,” he told them, it must be done. Lukashenko has already been suggesting that the demonstrations are some kind of NATO-Polish-Baltic plot, and such conspiracy theories are likely soon to take on a life of their own.

After a week of mostly peaceful protests, the OMON (riot police) have returned to the streets in full force, with the aim of intimidating striking workers and separating them from the other demonstrators – the familiar strategy of divide and rule.

One way to sow division within the opposition is to tar its leaders as fascists or Western puppets. We can expect to see Lukashenko’s lackeys donning the “anti-Nazi” St. George’s ribbon in the coming days. The same tactic, after all, was used in Ukraine during the 2014 Maidan revolution, when Viktor Yanukovych’s regime tried to brand the opposition as fascists even as it unleashed masked thugs to fire on and beat peaceful protesters. The charge of fascism made little sense there, and it makes even less sense now in Belarus.

Striking workers in Belarus enjoy widespread support, and have been encouraged by opposition protesters who gather in front of their factories and tell them about a “Solidarity Fund” to compensate them for lost earnings. In recent days, I have witnessed OMON thugs targeting these protesters near the Minsk Wheeled Tractor Plant (MZKT), admonishing them, “Don’t interfere with work.” The police also have cordoned off the offices of Belarusian state television, so that its staff can no longer join the demonstrations.

But most ominous are the (unconfirmed) rumors that Russia is deploying reinforcements to replace OMON members and media employees who have objected to the Lukashenko regime’s crackdown on protesters. One heard similar warnings whispered during Ukraine’s 2004-05 Orange Revolution. At the time, they were denounced as a hoax – what would now be called “fake news” – but after the revolution succeeded, the presence of Russians on the ground was confirmed.

In any case, the Lukashenko regime’s effort to separate the demonstrators (mainly young people with white-red-white flags) from the striking workers is now fully underway across Minsk. Workers are being threatened with dismissal and other punishments, and beatings similar to those meted out to protesters in the days just after the election could be next on the list.

The regime is ratcheting up the pressure on journalists, too, with reports of more beatings and detentions coming to light. Foreign correspondents are not allowed to enter Belarus without the regime’s explicit approval; those who try are searched and turned away at the airport.

At least three people have died as a result of state violence in response to the protests since the election. The latest victim is Gennady Shutov, a 43-year-old man from Brest who was shot in the head by police on August 11 and died in the hospital on August 19.

It was always a near-certainty that after 26 years in power, Lukashenko would not give up the presidency before unleashing the full force of the security apparatus. But doing so now will lead only to more unnecessary injuries and deaths. Following through with a declaration of martial law and unchecked state violence would test the security forces’ loyalty like never before. If Lukashenko, having rejected dialogue with opposition leaders, loses that test, he will have nothing left.

This article was first published by Project Syndicate on August 20, 2020. 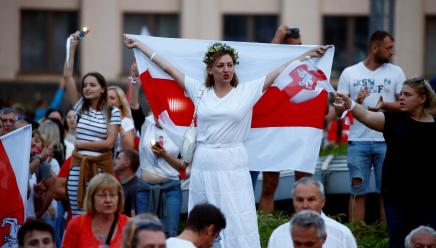