Europe Bails Out Its Populists

Following grueling negotiations over the European Union's budget and pandemic response, it is not surprising that much of the attention has focused on an historic agreement that will establish a proto-fiscal policy. Less surprising still is that the rule of law has once again received short shrift.

As expected, the European Parliament has torn into the European Council’s recently agreed budget and pandemic-response package. The €1.8 trillion ($2.1 trillion) price tag and proposed cuts to development funding, including science and research, have predictably met with resistance. But the biggest stumbling block was always going to be the proposal to make EU funding conditional on respect for the rule of law.

Arguing in support of such conditionality, Dacian Cioloş, the leader of the centrist Renew Europe group, claims that, “This is not aimed against Hungary nor against Poland or any other member state.” Rather, the point is to “ensure that European money no longer finances governments which continuously turn their backs on our fundamental values on a daily basis.”

But it is no secret that in both Hungary and Poland, EU funds are systematically used to finance political or private corruption and fund handouts to political cronies. The most recent example is the takeover of Hungary’s last independent news website, read by millions of Hungarians. Moreover, the governments led by Fidesz in Hungary and Law and Justice (PiS) in Poland are among the least inclined to show solidarity when it comes to accepting refugees or supporting the European Green Deal. Poland, for example, is the only EU member state that has refused to adopt a “net-zero carbon” target for 2050.

Instead of confronting these malefactors head-on, the European Council sought a compromise, delegating to the European Commission the task of creating a financial sanction mechanism to address violations of the rule of law. Whatever the Commission devises will then be subjected to a qualified-majority vote by member states.

The European Council’s compromise has met with no greater enthusiasm than in Hungary and Poland, where both governments dodged a bullet. In fact, it is difficult to describe the deal as a compromise at all, because each side claims to have agreed to something different.

According to EU Commission President Ursula von der Leyen, the Commission is ready to introduce a clear and effective mechanism for punishing violations of the rule of law, and it expects to secure a qualified majority without a problem. By contrast, Polish Prime Minister Mateusz Morawiecki claims that any proposal on conditionality will require support from all national heads of government, including those of the Visegrád Group (Hungary, Poland, the Czech Republic, and Slovakia). “Without the agreement of Hungary, without the agreement of Poland, without the agreement of the Visegrád group, nothing will happen.”

Morawiecki either assumes that the principle of unanimity will in fact apply, or he does not believe that a qualified majority can be reached without the Visegrád Group. In any case, there is no question about where the Polish government stands. Poland has once again turned out to be the largest beneficiary of EU funds, securing €139 billion in grants and €34 billion in loans in the new seven-year budget. While this is less in percentage terms than what former Prime Minister Donald Tusk’s government obtained from the EU’s 2014-20 budget, the additional disbursements from the pandemic recovery fund will push the total much higher.

As a result, the actual effect of the compromise is the opposite of what the EU intended. PiS will now receive even more EU funds with which to finance social transfers and consolidate its power. Since the deal was announced, the Polish and Hungarian currencies have appreciated rapidly against the euro and the dollar, and the Warsaw and Budapest stock indices have duly risen.

In the hierarchy of EU problems, it would appear that violations of the rule of law have been relegated by the pandemic, the resulting economic downturn, and the looming climate crisis. EU leaders seem to have faced a dilemma. EU leaders decided that they could choose only one of the possible historic breakthroughs: they could pursue either joint borrowing to rescue member states in crisis (inaugurating a long-awaited EU fiscal policy) or joint enforcement of the rule of law.

The real winner is Germany, which now can maintain pressure on the Polish government while shielding it from suffering too stiff a penalty

When French President Emmanuel Macron touted the results of the European Council summit as a “historic day for Europe,” he was referring only to the recovery fund. When it comes to the rule of law, Europe’s day was all too typical. EU leaders arrived at a compromise that allowed everyone to claim victory, leaving the underlying issue unsettled – just as Poland and Hungary had hoped.

But it would be wrong to conclude that Morawiecki and Hungarian Prime Minister Viktor Orbán are the bigger winners. Neither Hungary nor Poland is capable of pursuing a foreign policy of its own. And because both are exposed to constant pressure from abroad, they have no choice but to accept compromises – or even defeat – in the hodgepodge of EU decision-making.

The real winner is Germany, which now can maintain pressure on the Polish government while shielding it from suffering too stiff a penalty. The requirement that proposed sanctions be subjected to a qualified-majority vote guarantees nothing. After all, the same condition applied to Article 7 procedures against Hungary and Poland last year, and that process remains stuck in the European Council.

To be sure, once the Commission releases the details of the enforcement mechanism, it will be possible to apply greater pressure on Poland and Hungary. But neither country will face the budget guillotine immediately, given that the debate on this topic in the European Parliament and among member states could take two or three years.

Nobody wants to say it out loud, but everyone knows that isolating a country like Poland or Hungary would not benefit the West, and Germany, in particular, would have much to lose. Business in these countries is simply too good. The Visegrád group’s trade significance for Germany is greater than that of France, China, or the United States, and it is rapidly growing.

Populism pays off not just for the ruling parties in Poland and Hungary, but also for Germany. And now, this principle is being implicitly codified in the EU budget.

This article was first published by Project Syndicate on July 29, 2020. 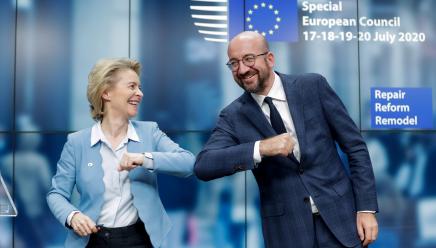 With its recovery deal, is the EU finally starting to act like a unifying force?