With its recovery deal, is the EU finally starting to act like a unifying force?

It was a long time coming, but the coronavirus crisis seems to have allowed Europe to make a leap towards genuine integration. The global financial crisis in 2008 exposed the inherent fragilities and incompleteness of Europe’s monetary union, prompting a decade of agonising debate over fiscal union. Essentially, sharing a common currency without sharing a real budget was always going to be unstable and potentially dangerous.

But now European leaders seem to be finally facing up this profound architectural problem. Common debt, common expenditure and the possibility of common taxation – which all seemed out of reach over the last decade – were accepted this week unanimously after a marathon summit that lasted more than four days.

The €750bn recovery and resilience package is far from perfect. From a macroeconomic standpoint, it is too small and too slow to respond alone to the depth of the shock imparted by the epidemic and the economic shutdown. From a practical standpoint, the governance is too complex – it requires national governments to present reform programmes before they can receive funds. But from a political standpoint, by agreeing both to pool part of the economic response to the economic crisis and by authorising transfers between member states, the agreement breaks important taboos.

It is the combination of these political realities that can make this a meaningful recovery package. Reluctantly for some, gone are the days when weaker eurozone countries could only hope for European loans with austerity conditions attached. Indeed, member states whose public finances were shaky can now point to a political backing for their increased government expenditure. The European Central Bank can now feel that its sovereign debt purchase programme, which effectively mutualises debt, is unanimously sanctioned by European governments.

But the agreement also raises a number of questions. First, in order to finance this recovery fund, member states had to agree to cut some of the most important and future-oriented parts of the EU budget, in particular in research, healthcare and the green-energy transition. Luckily, the European parliament that has to approve the deal is already threatening to block it if these critical spending items are not revisited.

Second, because the compromise required unanimity there is only a very superficial control of the compliance of the spending with the EU’s climate objectives and, perhaps more importantly, there is no clear mechanism for ensuring that recipient countries abide by the essential rule of law and democratic values enshrined in European treaties. These concessions were particularly key to enlist the support of eastern European countries such as Hungary – which is effectively a one-party state – and Poland, but they create a fundamental dilemma for the EU and its cherished values.

Third, a coalition of small countries led by the Netherlands (including Denmark, Sweden, Austria and at times Finland), dubbed “the frugals”, extracted a number of important concessions such as getting rebates for their contributions to the EU budget. This is a practice that had been originally requested by the Thatcher government in the 1980s and has since become a fixture of European budgetary negotiations – but it is also a mechanism that allows them to veto disbursements if they are displeased with economic reforms undertaken in southern economies.

Finally, the critical weakness of the agreement, and what certainly makes it fall short of a real “Hamiltonian leap”, is the lack of a clear commitment to common European taxation. (Alexander Hamilton propelled the United States into a true federation by engineering the government takeover of the debts of individual states in the 18th century.) Indeed, the agreement has the merit of setting some important milestones in 2021 and 2023 for agreeing some level of “own resources” to the EU budget (a shorthand euphemism for European taxation) but it falls short of naming them clearly and of opening a real debate about a common European tax. A pan-continental corporate or carbon tax will be necessary sooner than later, unless Europeans want to entertain the illusion that this new borrowing can somehow be repaid ex-nihilo.

There is a profound irony, but maybe not a coincidence, that the EU is making strides towards integration at a time when it is severing its ties to the United Kingdom. A negotiation like this one would have certainly been derailed by the current British government. But while this agreement opens new possibilities, it also points to new fractures. For decades, it has been quietly assumed that France and Germany could call the shots alone. But the intense negotiations and compromises show that they can no longer carry the day on their own.

The growing powers of a growing coalition of small countries, willing to use their vetoes, as well as the internal divisions inside European political parties (the socialists, the European People’s party and the liberals), suggests that the institutional and constitutional overhaul that is required for the EU to stand more firmly on its feet will be long and hard.

This article was first published on July 22, 2020 in The Guardian. 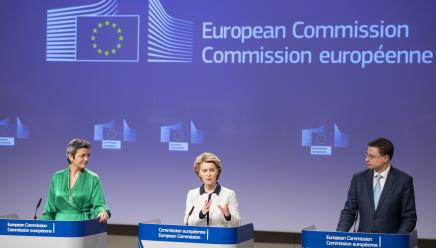