EU officials find it hard to take Boris Johnson’s government seriously. Yet it appears that London not only believes it has an approach to world affairs to rival the EU’s, but that it also can attract big geopolitical partners at the EU’s expense. The UK’s forthcoming Integrated Review of defense, aid, and foreign policy will be a statement of intent. Unforced EU errors like the China investment deal will give London confidence that it can slowly win over the US and other key allies to its worldview.

In 2016, Brussels saw Britain’s vote to leave the EU as a threat. But since Boris Johnson took power in 2019, European officials have found reassurance in his clownish politics. They have lapped up reports of how Johnson, a throwback to the UK’s old ruling classes, is exploiting the prejudices and delusions of Britain’s working classes. They have barely disguised their schadenfreude as the UK erodes its credibility through populism, pork barrel politics, and international posturing. Moreover, they clearly foresee how the technical terms of the EU-UK trade agreement will degrade the UK’s economy and status in a rules-based order.

Speak with officials and analysts in London, however, and they say that eurocrats are relying on, at best, a very partial perception of events across the English Channel and that the British government is far more robust than it appears. Most shake their heads at the notion that Boris Johnson is either a member of a hereditary ruling class or in charge of some unholy alliance with the working classes. Rather, he is a political outsider and, as such, represents huge swathes of UK society, from billionaires to blue-collar workers – including the level-headed middle classes, who the EU had hoped would sweep his government away.

If these voices are correct, then Johnson may become the first leader to harness the backlash against globalization and turn it into a positive force for reform. In any case, he will likely pit his vision against the EU’s in a battle of narratives – and the EU would do well to try to understand the other side of the Brexit story.

Boris Johnson is a product of the times: in recent decades, wealth and education levels have grown in the UK while the number of seats in government have not. Those born between 1946 and 1976 are better off than their parents were, leaving this whole generation to wonder why its status has not improved concomitantly. While Johnson himself may have been driven by a very personal resentment against the political elites, his grievance is something with which a vast demographic – perhaps 30 percent of the electorate – could identify. It appears to be a sufficient basis not just for government but also popular mobilization.

It helps that Johnson understands what drives his supporters. Like him, they might appear to be iconoclasts, but they actually seek admiration and approval from elite institutions. Johnson has therefore placed dissidents in positions of prestige, decapitating the pillars of British government from the civil service to the BBC and co-opting people who would otherwise snipe at him. He has elevated firebrands to the House of Lords, giving them the acceptance they crave while ushering them into a political backwater. And he has bought off “buccaneering” Brexit billionaires with government procurement contracts.

Europeans are quite correct in surmising that such pork barrel politics would ordinarily create a popular backlash. But in Boris Johnson’s hands, they have become the means of consolidating power. Such paradoxes are further evidence that those voters who identify with Johnson are ready to take a considerable hit – both in terms of the economy and stability – if that means replacing the old elites. British strategists say that Johnson has drawn lessons from similar uprisings in the United States, Brazil, and Italy and believes that his government will be the one to harness the revolt of “elite replacement.”

From Posturing to Positioning

This desire to capitalize on a fluid domestic electorate also explains Johnson’s international posturing. To European ears, Johnson’s hyperbole about “Global Britain” may sound like a throwback to the imperial era; and his pronouncements about tech, defense, and climate, as well as free trade, sovereignty, and subsidies, are simply contradictory. But that is hardly the point. This posturing has provided a means to give very different identity groups a feeling of recognition and self-esteem. Johnson’s people have apparently been reading Fukuyama’s Identity: The Demand for Dignity not Morgenthau on imperialism and prestige.

As Britain’s old class-based politics is swept away, new political tribes have emerged: the “Scots Nats,” the “Woke,” the “Left Behinds.” And Johnson has everything to gain from this flux. The rise of the Scottish Nationalists has pushed Labour out of their traditional Scottish strongholds, denying them hope of a majority in Westminster and, in turn, driving new groups of English voters toward Johnson. For Johnson, international posturing has provided a low-cost means of making these very different groups feel heard. As one analyst says of the contradictory messaging: “groups these days tend to hear what they like.”

Johnson presumably hopes the UK’s 2021 presidency of the G7 will give the “Boristas” and the Left Behinds a feeling of global status. Its presidency of the twenty-sixth UN Climate Change Conference of the Parties (COP26) will appeal to the Wokes and – by adding host city Glasgow to the pantheon of Kyoto and Paris – the Scots Nats too. But, as these international fixtures draw closer, they have also required domestic policy action. This development has finally obliged the Johnson government to come up with a coherent narrative about what Brexit Britain stands for.

A Competition of Narratives

This month, the UK is due to publish its Integrated Strategic Review – its attempt to position itself in the world after Brexit. The review will probably depict Britain at the forefront of a new approach to globalization and international order. That, after all, is the lowest common denominator that unites these new political tribes – the feeling that Western-led globalization has created globalist elites (according to the Boristas) and destroyed political accountability (the Scots Nats); that the global economy is simply too extractive to be sustainable (the Woke) and its benefits too unevenly distributed (the Left Behinds).

The UK will paint Brexit as a painful but necessary response to these strains, and this story will be given structure by a counter-narrative about the EU. In the coming months, the UK will portray Britain as nimble and “match fit,” and the government as ready to take a hit to the economy and stability in pursuit of decisive international action. It will stress Britain’s ability to mobilize its population, including the precariat, in defense of liberal values. It will highlight its readiness for international burden- and risk-sharing. And the subtext will be clear: Britain is able to do this only because it has emancipated itself from the EU system.

That may not sound like much – a battle of narratives – but nobody in the West has yet found the words to succinctly describe the current tensions and shifts in global politics. According to one interviewee in London, whoever finds the right words will be able to define the ideological lines that structure international relations, and whoever does that will have their choice of alliance. Another puts it more plainly: this war of words will serve to pluck the transatlantic alliance from the grips of the European Union, making the incoming administration of US President-Elect Joe Biden see that the EU is not a load-bearing ally.

This sets up three main narrative battle lines. In the EU’s telling, Brexit Britain is a threat to the “rules-based international order,” and the UK’s ongoing populist convulsions will render it too poor and divided to carry out its grand plans. But in the UK telling, the very idea of a “rules-based international order” will be the problem, especially when these rules are nothing more than technical trading norms. Inside the EU, this order has created an unresponsive elitist politics. Globally, it has led to the rise of an authoritarian China and its accommodation. The UK knows the price of leaving the EU and the value too.

The EU depicts the UK as reliving past glories, once again cutting itself off from the continent and scavenging for global opportunities. Britain also sees itself as reliving past glories, but these involve engagement in Europe not withdrawal. British strategists look back to the 1950s, another period of domestic upheaval in the UK, and a time when Europe was unable to live up to the responsibility of its own defense. Back then, London was credited with keeping the Americans in Europe by organizing the British proletariat to fight for liberal internationalist values from which they themselves had felt little economic benefit.

At the wilder fringes of the UK narrative, the EU is dominated by Germany, ratcheted by greed and trade links toward China with the British pushed out (the so-called secession by the center). And Germany is, in turn, being steered by a Gaullist French president who is mistrustful of Anglo-Saxons and displaying a callous readiness to use the island of Ireland as a pawn in undermining Britain. This will sound ridiculous to European ears, but no more ridiculous than the telling of the EU – including some Irish commentators – that the UK is in the grips of an imperial era ruling class that subjugates its own working classes. 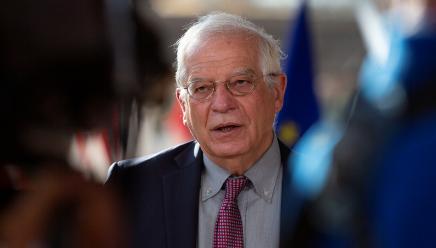 There is a growing consensus that the EU has to become a geopolitical actor. To achieve this goal, numerous constraints will need to be overcome. Priorities include defining its position vis-à-vis the incoming Biden administration—and China.