German policymakers are worried about the upcoming election in France, that is: Emmanuel Macron is facing a battle for re-election in 2022, and he wants some political victories in Europe. He will expect help from the new German government, even at the cost of German interests and EU cohesion. He has already proved assertive in putting issues on the EU agenda, and the highest French Court is now opening scope for him to block EU initiatives based on an expansive definition of national security. A recent Spanish-Dutch initiative signals member-state discontent, and Spain’s involvement in particular has raised difficult questions. It seems Germany is not yet ready to face the answers.

Last month, Spain and the Netherlands released their ‘Non-paper on Strategic Autonomy while preserving an open economy ’. The non-paper delivers a verdict on the European Council Conclusions of October 2020 from which its title is drawn: ‘what [European] strategic autonomy must foster is greater resilience and interdependence, in the context of more balanced, and better governed globalization, in which interoperability must prevail over uniformity’. The wordy contents of the non-paper have met with relative non-interest across Europe –even in France, which created the term European strategic autonomy and that effectively placed the issue on the October summit agenda.

But that is not the point. The mere fact of the paper’s existence was more interesting than its contents: these two countries are usually considered antagonists. They sit on opposing sides of a fundamental EU debate –the Netherlands (fiscally hawkish) and Spain (dovish)– and yet they have coupled up. As such, the non-paper can be read as a shot at the Franco-German tandem that poses as the EU’s indispensable bridge-builders. Or more specifically, it can be read as a shot at how France uses Germany to influence the EU agenda: in their non-paper, Madrid and The Hague signal their support for the German position on strategic autonomy and rejection of the French.

Spain ceases to be a ‘southern’ member

The first signs of Spanish-Dutch rapprochement began as early as January 2018, when the Netherlands and Spain pushed for a softer line on Brexit: Berlin was failing to soften French revanchisme, and its passivity upset states like Spain and the Netherlands with close relations to London. A proper Spanish-Dutch initiative never materialised from that first encounter, and the Netherlands regrouped with Finland, Denmark and Austria, influencing Germans through their austere northern alliance (‘The Frugals’). But Spain has no such cohort of like-minded states, and it rejects the idea that it should entrust its interests in the EU to France as the supposed representative of Euromed states.

Madrid’s assertive attempt to build a bridge of its own to the Netherlands and Germany, over the heads of the French, should therefore come as no surprise. This government has grown increasingly assertive at the EU level despite domestic problems such as recession, secessionism and a series of inconclusive election results. The Socialist Prime Minister, Sánchez, feels his country has been punching below its weight. In 2019 he helped broker the allotment of top EU jobs, and this evidently whetted his appetite for influence. His government’s recent foreign policy strategy included a very deliberate rethinking of Spanish positioning and bilateral relationship-building in the EU.

Berlin had, nevertheless, assumed that Madrid would slip back into its allotted spot behind Paris following a set of breakthroughs for the Franco-German engine. Last year Paris and Berlin successfully ended EU budget talks, with Germany conceding for the first time the right of the EU to borrow. France and Germany also ushered in the China Investment Agreement –a controversial but necessary deal, given the steep decline of EU leverage over China–. And they initiated a series of multi-annual projects, like the ‘Strategic Compass’, which will be bookended by the German Presidency of the EU Council (2020) and the French (2022). Spain and the Netherlands should really be happy.

How the Franco-German engine backfires

The fact that Spain and the Netherlands are cooperating is in fact a result of these Franco-German breakthroughs. The budgetary compromise of December 2020 finally paved the way for the EU to issue common debt on behalf of the member states, and ended the Eurozone schism between doves and hawks, southerners and northerners. Ended the schism, but did not heal it: Germany and France may have brokered a deal, but their wrangling has created lasting splits amongst members states. These splits have replaced the old divide with a whole series of more serious new fractures, with relations between all members becoming even more transactional.

The Franco-German breakthrough on the EU’s recovery fund came only after the French had politicised the issue –only after they had brought diplomatic tensions to crisis point and threatened to advance an exclusive ‘core Europe’ at the expense of other members– all in order to push Germany into compromise. These events showed once again how the Franco-German engine or ‘motor’ in fact produces stalemates in the EU. Whether it is on Eurozone reform, armaments cooperation, Turkey or Russia, the pair clash frequently. The other member states are expected to stand by and watch until the two big players finally agree. France increasingly mediatises the way it draws German concessions.

Paris and Berlin perpetuate splits. They continue to divide other members into camps, north and south, hawks and doves, to reinforce the idea that they alone can overcome the divisions. Similarly, their own role as a motor requires other member states to be troublemakers. This is largely self-fulfilling. Hungary and Poland see their interests barely reflected in Franco-German compromises and, being suspicious of integration for the sake of ‘ever-closer union’, are increasingly content to play a spoiler role. The Dutch themselves were reduced to mere bystanders when Paris and Berlin unveiled a roadmap for eurozone reform in 2011. This tipped them towards Euroscepticism.

Reasons for Berlin to tilt away from Paris

Germans are aware of the side-effects of their special relationship with France. Indeed, Berlin was spooked by the Spanish-Dutch non-paper precisely because it is worried about Macron and his demands. But Berlin does want to support Macron ahead of the French Presidential election in his bid to fend off his far-right challenger, Marine Le Pen. To win over French voters, the EU needs to show itself capable of dealing with big challenges in the EU’s green, digital and sustainable economic recovery. And after Brexit, the EU’s two remaining heavyweights have greater voting weight –so why should they waste time building alternative coalitions?

Spain has nevertheless forced Berlin to consider an alternative scenario in which it deliberately extends its web of relationships beyond –and away from– France. For at least a year now Spain has been deliberately courting Germany, signalling affinity on significant dossiers. Sánchez sided with the German Defence Minister, Annegret Kramp-Karrenbauer, stating boldly that he supports the German’s vision. On migration: both Spain and Germany are pushing for an agreement on the EU’s ‘New Pact for Migration and Asylum’. On the EU recovery fund, both want to direct national Recovery and Resilience Plans towards green and digital transition.

More important still, Spain echoes Germany’s inclusive style of European engagement, one that does not feel the need to first polarise in order to build bridges. Spain sits at the EU’s geographical periphery and has suffered in the past from the fact of being placed in the political camp of the ‘EU’s South’ –a heterogenous and disorganised group with no clear leadership or agenda–. Not only has it followed Portugal in signalling to Germany that it rejects this label, it has also reached out to the black sheep in the EU –countries labelled ‘veto-players’ and stragglers by the Franco-German tandem–, namely Romania and the Viségrad countries (Poland, Hungary, the Czech Republic and Slovakia).

So what is holding Germany back here? Reaching out to Spain and its new web of partners could actually be an effective way of scotching the threat of Le Pen in the EU –showing voters that the EU is capable of action without the cliff-hangers and big set piece showdowns beloved of Macron. At the very least, diversifying its partnerships would hedge against a Le Pen victory. It could even be a way of strengthening the Franco-German tandem, by opening up that relationship to new partners. Its refusal to move on this last point reveals what the real stumbling block is for Germany –and it is an unexpected one.

Germany does not fear breaking the tandem per se; what it fears is having to choose new favourites from the other 25 member states. This would be unfair. Put another way: Germany has tied itself to the other big member state in a highly divisive way in order to avoid charges of favouritism and dominance. 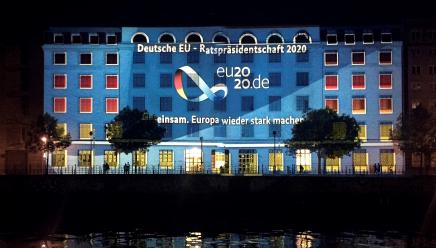