After weeks of watching massive peaceful demonstrations against neighboring Belarus's authoritarian regime, Poles have finally taken to the streets to confront their own illiberal government. As in Belarus, Poland's de facto ruler, Jarosław Kaczyński has overplayed his hand – and women have been the first to smack it away.

Authoritarian political leaders in neighboring Poland and Belarus have tested the limits of public tolerance in recent months. In both countries, they have provoked mass demonstrations. And in both cases, women have been in the front ranks of popular opposition.

In a rigged election on August 9, Belarusian President Aleksandr Lukashenko gave himself 80% of the vote when a more plausible 55% would have sufficed. Poles followed the events in Belarus closely and with admiration, hoping for similar mass opposition to the increasingly despotic Law and Justice (PiS) government.

Then, on October 22, with COVID-19 infections rising exponentially, Poland’s de facto ruler, PiS leader Jarosław Kaczyński, effectively dared Polish citizens to take to the streets. Having stacked the country’s Constitutional Tribunal with PiS lackeys, Kaczyński ordered the court to issue a ruling all but banning abortion.

For the past 27 years, Poland’s already restrictive abortion law allowed a woman to terminate a pregnancy only when her life was at risk, the pregnancy resulted from incest or rape, or the fetus was damaged. The new ruling removes the last exception, meaning that women will be forced to bear children who have little or no chance of survival.

The subsequent mass protests – which have occurred both in large cities and small towns and villages – are unlike anything seen in Poland since PiS came to power in 2015. Some 100,000 people marched in Warsaw, and more than 500,000 nationwide. And, as in Belarus, women played the leading role.

That is no accident. In Poland, organizers have created a Consultative Council – a direct reference to the Belarusian opposition’s Coordination Council, and women protest leaders have been exchanging strategies with their counterparts across the border. One lesson from Belarus is that regular organized action is crucial, so Poles have committed to blocking major intersections throughout the country every Monday.

Belarus’s experience has also shown that people will risk their health to protest against authoritarian power grabs, especially given the authorities’ failure to manage the pandemic, which is another major source of popular discontent. Poland’s infection rate is now among the highest in the world, suggesting that the timing of Kaczyński’s decision to impose a highly controversial policy change may have been intended to distract attention from the PiS government’s pandemic-related failures.

In Poland’s most recent parliamentary elections, the extreme nationalist party Konfederacja won 11 seats in the Sejm (the lower chamber of parliament). Kaczyński perceives this as a personal defeat, because he has always sought to be at the Polish parliament’s right-most extreme. Konfederacja is growing in strength, which is mobilizing the right-wing faction within Kaczyński’s camp associated with the justice minister, Zbigniew Ziobro. Without Ziobro’s 18 deputies, Kaczyński does not have a parliamentary majority.

Moreover, Ziobro is competing directly with Prime Minister Mateusz Morawiecki to position himself as Kaczyński’s eventual successor. When Kaczyński came in from the sidelines to become deputy prime minister in the current government this past September, it was so that he could keep closer tabs on Ziobro, whom he hopes to reconcile with Morawiecki. Kaczyński’s sharp ideological shifts should thus be understood as part of a broader attempt to reclaim control over the far right.

In a special address responding to the protests, Kaczyński called on PiS members to fight those standing up for women’s rights. “In particular, we must defend Polish churches,” he declared:

"We must defend them at any cost. I call on all members of PiS and all those who support us to take part in the defense of the Church. ... Now is a time when we must say ‘no’ to everything that can destroy us. Everything depends on us. It depends on the state and its apparatus, but above all on us, on our determination, on our courage. Let’s defend Poland!”

Taking their cues from Kaczyński, far-right organizations are now organizing militias to attack women during demonstrations. After one hooligan with a criminal record assaulted a Gazeta Wyborcza journalist, Ziobro stepped in to prevent the local prosecutor’s office from arresting the assailant. Charges were, however, brought against a 14-year-old girl arrested during the protests. As Michał Woś, a deputy justice minister, explained, the authorities are directly threatening the organizers: “Prosecutors received guidelines to treat all organizers of illegal demonstrations as criminals, and appropriate charges are to be brought against them, entailing up to eight years in prison.”

Both sides have learned from Belarus’s experience. The Polish government has deployed hundreds of police and military personnel to tear-gas women protesting in front of Kaczyński’s house. But not all uniformed personnel are willing to brutalize demonstrators. Police Inspector General Jarosław Szymczak, for example, has threatened to resign. And in a recent open letter, 210 retired military, police, and security service generals warned that the abortion decision “has caused public opposition and mass street protests. Further escalation, incitement, and irresponsible behavior by politicians will lead to tragic and irreversible consequences.”

As matters stand, it appears that Kaczyński has blundered badly. In a recent poll, 73% of respondents said they are against the Tribunal’s ruling (including 60% who are strongly opposed). Even the PiS base is divided, with 37% supporting the judgment and 36% opposing it. As a result, PiS’s support overall has fallen sharply for the first time since it came to power. In a Kantar poll published on October 28, the party had just 26% support, compared to 24% for Civic Coalition (an alliance between Civic Platform and Modern). All told, PiS and its allies have just half the support of parties opposed to PiS.

As a result, there is growing disappointment with Kaczyński within PiS. While there still is no alternative leader, and the next scheduled general election is not until 2023, infighting within the ruling camp could eventually lead to an early vote, as happened with the first PiS government in 2007. Like Lukashenko, Kaczyński clearly overplayed his hand. And, as in Belarus, women have been the first to smack it away.

This text was first published on November 3, 2020 by Project Syndicate. 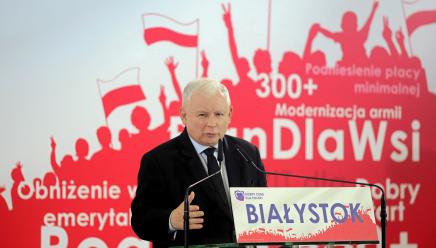