The next months will show whether Hungarian Prime Minister Viktor Orbán can retain his influence in Europe even outside its largest political family. Having left the center-right European People’s Party before his party was finally pushed out, Orbán is now trying to regroup and unite the populist and Euroskeptic forces in European Parliament. What looks like a defeat could still be turned to his advantage if it leads to a lasting reshuffle of political alliances and strengthens illiberal voices.

After years of tension between the Hungarian Fidesz party and the European Peoples’ Party (EPP), Viktor Orbán needed only two weeks to take his party out of its European political family. On March 3, after the EPP group adapted its rules of procedure to allow it to expel a party delegation, the Hungarian Prime Minister announced that he was withdrawing his 11 members of European Parliament (MEPs) from its largest political grouping. This decision has not changed the balance of power in European Parliament. The EPP remains its strongest group with 175 MEPs out of the 705 seats, well ahead of the Progressive Alliance of Socialists and Democrats with 145 MEPs.

Orbán formalized the divorce on March 18 when he handed in his party’s official resignation. Many in the EPP will have breathed a sigh of relief. The EPP has long been accused of turning a blind eye to the way Hungary’s ruling party is dismantling democracy and rolling back the rule of law, media freedom, and civil liberties. Even though Fidesz was suspended two years ago, Orbán had continued to brazenly cross red lines.

For now, Orbán’s party has lost its influential positions in the European Parliament: one vice-presidency and three vice-chairmanships of parliamentary committees. But it is mainly the political protection and respectability that stemmed from membership in the EPP that Orbán will miss. Without it, it seems that Hungary can no longer count on the restraint of German Chancellor Angela Merkel; she consistently prioritized EU cohesion over antagonizing this tricky little member state. In the vote on the EPP’s rules of procedure, all German MEPs from Merkel’s sister parties, the Christian Democratic Union and Christian Social Union (CDU/CSU), stood firm. Moreover, Orbán cited a phone call with Armin Laschet, the CDU’s new chairman, as reaffirmation of his decision to leave the EPP. Markus Söder, the head of the CSU, also actively expressed support for the expulsion of Fidesz.

Therefore, on the face of it, Orbán’s decision to remove Fidesz from the EPP is a risky move. He is facing two political showdowns with Brussels ahead of Hungarian parliamentary elections in spring 2022: one on the ongoing Article 7 procedure and the other on the implementation of the rule of law regulation. And yet, Hungary is not likely to feel much pressure on either dossier – at least in the immediate term.

The Article 7 procedure, which, in theory, provides for sanctions on member states if there is a clear risk of a serious breach of European values, has been moving very slowly. The final decision on Article 7 needs to be made unanimously by the national governments in the European Council, but Hungary and Poland, the other country under this procedure, have been actively supporting each other there.

It is a similar picture for the new rule of law conditionality mechanism, which is linked to the multiannual EU budget. This mechanism was approved in December 2020 after lengthy negotiations. Before applying it, however, the European Commission will have to wait until the EU’s Court of Justice decides whether the regulation on which it is based is even legal. Moreover, even if the rule of law mechanism is applied starting next year, it will focus only on new and not past cases. The bottom line is that it will not damage Fidesz’s economic support base in Hungary let alone prevent the party’s supporters from receiving substantial EU funds in the run-up to Hungary’s 2022 parliamentary elections.

Consequently, what currently looks like a defeat could still be turned to Orbán’s advantage. True, Orbán has always been careful to stay close to the center of power in Europe, allowing him to play a spoiler role without becoming isolated. But this very fear of isolation is now driving him to create an ambitious alternative political platform on the EU level in order to amplify his voice and regain his leverage outside the EPP. If his past modus operandi is any indication, the Hungarian Prime Minister will proceed as the cunning political veteran he is. He will likely ponder all tactical options and rely on the following factors:

First, Orbán is viscerally aware of the “numbers game” – above all, the relative weight of each member state across the EU’s institutions. For this reason, his next moves will be closely coordinated with other far-right parties in western Europe, particularly with Matteo Salvini’s Lega. The Lega party has established itself as a leading force in Italian politics and has one of the largest national delegations in the European Parliament.

Second, he sees an advantage in being able to reach out to different, competing factions on the right and far-right in Europe. While some of these parties and their leaders are not on speaking terms with each other, they all talk to Orbán.

Third, he will continue to exploit the mechanics of the EU system – not so much in pursuit of a specific policy agenda but to achieve protection for himself. Orbán has always been eager to shape “blocking minorities” with a combined influence in the European Council and European Parliament to shield his own government from punitive actions by EU institutions.

Fourth, he will dress this political maneuvering up as a “cultural battle” for the future of Europe. Orbán will create a narrative based on identity issues, claiming to form a new camp for those – to quote from his letter to Manfred Weber, head of the EPP group – “who do not want migrants, who do not want multiculturalism, who have not descended into LGBTQ lunacy, who defend Europe’s Christian traditions, [and] who respect the sovereignty of nations.”

Orbán will now be running through his available options for Fidesz. At first glance, looking only at group size, joining the far-right Identity and Democracy (ID) group seems the most attractive. With 75 MEPs, it is currently the fourth-largest bloc in European Parliament. Dominated by the Italian Lega with 27 MEPs and the French Rassemblement National (RN) with 23 MEPs, the group also includes representatives from the Alternative for Germany (AfD) and a number of smaller far-right parties, mainly from western and northern Europe. Yet, such a scenario seems unlikely. Not only would Orbán’s influence in this grouping be very limited, but joining it would also risk complicating his already fraught relationship with Germany’s mainstream conservative parties, the CDU/CSU, since it contains the far-right AfD.

Thus, joining the conservative, Euroskeptic group of the European Conservatives and Reformists (ECR) would appear to be the easier option for Fidesz. According to recent data from Votewatch on votes in European Parliament, Fidesz tends to agree with the ECR group a remarkable 72 percent of the time (compared to 51 percent with the ID). Still, joining this party only seems feasible as an interim solution. The ECR group is dominated by Poland’s ruling Law and Justice Party (PiS), which, after the exit of the British conservatives, makes up almost half of the whole group with 27 of its 62 MEPs. Orbán’s party would, therefore, be relegated to second fiddle by a party it has come to look upon as a junior partner. Although Orbán enjoys close relations with PiS, he is used to determining the political climate in Warsaw.

Nevertheless, if Orbán can persuade other large parties to join ECR along with Fidesz, he can dilute PiS’s influence and balance factions. Accordingly, Orbán is now trying to persuade the Italian Lega, the Slovenian Democratic Party of Prime Minister Janez Janša, and several other parties to join ECR. There will, of course, be opposition from the “Brothers of Italy,” the Italian party that is already a member of ECR, since it competes with Lega for the same national electorate. Moreover, it is unclear to what extent Poland’s ruling party is open to this scenario. Still, with such an expansion of its ranks, ECR could jump to 106 MEPs, making it the third-largest group in European Parliament. ECR would then include three heads of governments represented in the European Council (while the EPP’s representation there would drop from 11 to 9).

Forming a new group would give Orbán the advantage of choosing his allies. But it would also require him to gather at least 25 MEPs from at least 7 member states – effectively necessitating a complete reshuffle of the existing populist and Euroskeptic camps in European Parliament. If Orbán decides to go this route, the key to his success will again be winning over Lega. But Lega’s participation in Mario Draghi’s strongly pro-EU government in Rome illustrates a fundamental internal conflict over the party’s direction that is unlikely to be settled before Italian presidential elections in February 2022. Still, a new group drawing MEPs from ECR, ID, and even from EPP itself (such as Janša’s 2 MEPs) would certainly have the potential to become the third- or fourth-largest group in European Parliament, rivalling the liberal Renew Europe with its 97 MEPs. And the larger the faction, the more speaking time, money, and staff.

Orbán’s Fate Depends on Others

Officially, Orbán will only have to make up his mind before January 2022, when all of the key positions in European Parliament – from the president to the committee chairs – will be reallocated. But much is already at stake for Fidesz at home. After a decade in power, its support is slowly declining. For the first time, the united opposition is ahead of Fidesz in some polls. The prospect of a nasty, combative campaign ahead of Hungarian parliamentary elections in spring 2022 is a good motivator for quickly finding a new political home for Fidesz. As his government is likely to manipulate electoral legislation, campaign rules, and the media, Orbán will need a new European platform from which to fend off mounting criticism from EU institutions and to present himself to the Hungarian electorate as both a victim of “liberal Europe” and savior of “Christian Europe.”

Because Orbán is a magnet for other populist forces in Europe, his maneuvers matter

Orbán’s maneuvers matter. While Fidesz only contributes a small number of MEPs, its leader is a magnet for other populist forces in Europe. During the pandemic, many of those far-right parties cast aside their more hardline anti-EU positions – including, like Italy’s Matteo Salvini or France’s Marine Le Pen, their arguments for leaving the euro. Thus, these parties became more acceptable allies, representing a camp that will be an even more formidable voice in the upcoming debate on the future of Europe.

Nonetheless, the shape and political strength of this populist and far-right camp will eventually depend more on domestic developments in Italy or France than on those in Hungary. As Viktor Orbán knows perfectly well, size matters – also beyond the European Parliament. So the ultimate question is: which of the bigger players will decide to follow him? 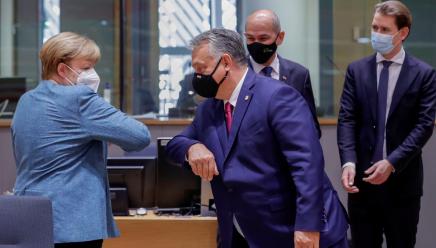 Backing Down Is Too High a Price for the EU to Pay
Author/s
Milan Nič
Dr. Roderick Parkes
Slawomir Sierakowski
et al.