In the United States this November, voters in all 50 states will elect members of Congress. They will also elect governors, secretaries of state, and state-level judges. Although commentators in Germany looking for clues about the way the political wind is blowing ahead of the next presidential election will likely focus on the former, they should also pay attention to the latter. These state-level posts are vital to certifying election results. If candidates loyal to Trump win those elections, they might give in to pressure to rig the results in 2024.

Donald Trump and his confidants are currently the subject of multiple criminal investigations. Much attention has been paid to what these mean for Trump’s standing with voters – in terms of both his ability to support Republican candidates in November’s midterm elections, when all 435 seats in the House of Representatives and 35 of the 100 seats in the Senate will be contested, and his prospects for another presidential run. Yet one of these investigations is instructive for a different reason: It signals Trump’s readiness to manipulate the 2024 election. That case involves a January 2021 phone call during which the still incumbent president told Georgia’s secretary of state, Brad Raffensperger, to “find” 11,780 votes. Trump needed these votes to tip the results in Georgia, which, by a thin margin, had just voted for a Democratic presidential candidate for the first time since 1992.

If Trump supporters win this November, they could cave to political pressure from Trump and other leading Republicans to manipulate elections in 2024.

The episode illustrates the crucial importance of secretaries of state in conducting elections – importance not lost on Trump. Because he found Republican officials like Raffensperger unsympathetic in the last presidential elections, Trump is trying to install his allies in key positions in the run-up to those in 2024. It is not far-fetched to conclude that he wants his pet candidates to either rig the results of the next presidential election in his favor or act on his behalf in a system that, to his mind, is rigged against him. Many of these candidates actively support Trump’s lie of a “stolen” 2020 election. If they win this November, they could cave to political pressure from Trump and other leading Republicans to manipulate elections in 2024.

The Electoral College System Creates a Handful of Swing States

In contrast to other presidential systems such as those in France, US presidents are not elected directly by the popular vote but indirectly by an Electoral College. This body was established by the Constitution in 1787 when its drafters argued that the plan for Congress to elect the president would break the separation of powers. Therefore, before presidential elections, every political party assembles electors from each state. The electors from the party with the most popular votes in November meet in their respective state capitals in December to cast their votes for the presidential candidate. On the now fateful date of January 6, the votes from all states (plus Washington, DC) are counted in a joint session of Congress presided over by the sitting vice president who also announces the final election results.

US presidents are ultimately elected by a minimum of 270 of the available 538 votes in the Electoral College. The 50 states (plus Washington, DC) have very different numbers of votes. In 2020, California had 55, Wyoming 3. However, apart from Nebraska and Maine, all states follow the same winner-take-all principle. This setup produces a handful of swing states where a candidate can win the popular vote by a slim margin of just a few thousand votes but still receive all that state’s votes in the Electoral College. The rival presidential candidates tend to identify these states early in their campaigns and direct their funds at them. In the last presidential election, the so-called battleground states included Arizona, Pennsylvania, Michigan, Wisconsin, and – for the first time in decades – Georgia.

The fact that nationwide election results are typically dependent on a small number of swing states means that the officials who oversee the elections and certify the election results in those states have significant influence. That said, most secretaries of state – as top administrative officials at the state level – play a central role in overseeing elections although their specific authority differs. While only some are responsible for administering voter rolls and supervising local election officials before and during elections, most are deeply involved after the polls have closed. At that point, they or a state board of elections/canvassing board – of which they are often members – receive the election results from each of their counties, compile statewide results, and oversee or are involved in the certification of the total number of votes in each state. This November, 27 US states will hold elections to fill the secretary of state position.

Furthermore, 36 states will elect governors and 30 will elect justices for their state supreme courts, positions that also play a central role. Governors are key to the presidential election process in each state because they are responsible for preparing the lists of electors from their states that indicate the votes obtained by each candidate. Each governor signs this list – sometimes together with the secretary of state – in a Certificate of Ascertainment and sends it to the Archivist of the United States in Washington. Courts can play an important role after elections as they rule on any complaints of irregularities before the end of the “safe harbor” period – that is, six days before the party electors meet to vote in their states and then record the results in a Certificate of Vote, copies of which are sent to the US Congress and the National Archives and are counted in the joint session of Congress on January 6. (Of course, if Republicans hold majorities in both houses of Congress, they could also interfere in the electoral process at this point.)

In 2020, the opposition of Brad Raffensperger and other upstanding individuals – who stood up to huge pressure from the Republican base in several swing states – kept the election from being rigged. In Arizona, the speaker of the state’s House of Representatives prevented several of his fellow Republicans from introducing a bill that would have overridden Arizona’s election results. In Michigan, local election officials refused a request by the Trump campaign team to confirm that its elections were fraudulent. And in Pennsylvania, a handful of senior Republican lawmakers resisted pressure by Trump’s allies to rig the Electoral College system and appoint “alternate electors” instead of those listed in its Certificate of Ascertainment. Such actions foiled Trump and his confidants who had initiated a scheme leading fake electors to meet in seven swing states, vote for Trump, and send fake Certificates of Vote to Congress. According to this scheme, which is currently under investigation, Mike Pence was then to declare that the results from these states could not be determined due to the confusion surrounding them.

Pence resisted this pressure and was subsequently vilified as a RINO, meaning a “Republican in name only.” Two years on, more moderate Republican candidates have lost their bids to run for secretary of state and governor in key swing states such as Arizona, Michigan, Nevada, and Pennsylvania. Of course, the candidates who won their primaries may only be opportunistically courting Trump’s backing and, if elected, may act less radically. But there is little reason for optimism. A prime example is Mark Finchem who previously identified himself as a member of the Oath Keepers, a far-right militia group. Finchem, who won the Republican nomination for Arizona secretary of state, has said he would not have certified Joe Biden’s victory in 2020. In fact, he had proposed a bill to allow the state legislature to invalidate election results in three precincts where Democrats won majorities.

Voting Rules and Practices Are Already Beginning to Change

If candidates like Finchem win in November, they will likely attempt to alter election rules in ways that further benefit populist Republicans. The scope for such changes is significant. In 2013, the Supreme Court of the United States weakened the Voting Rights Act of 1965, giving states the opportunity to set many of their own election rules without much oversight from the US Department of Justice. This will affect how votes are cast throughout the United States. The Republican candidate for secretary of state in Nevada, for example, is seeking to eliminate the right to vote by mail – and he is hardly an anomaly. The America First Secretary of State Coalition is bringing together Trump-backed candidates for secretary of state and other offices; their platform includes new rules on voter ID, restrictions on mail-in ballots, and “aggressive voter roll clean up.” If this purge is overzealous, many voters could find themselves removed from the rolls and effectively barred from voting.

In addition to voter restrictions, we could see even more shameless attempts to manipulate the results of the 2024 elections. In 2020, Trump already made wild claims: that voter turnout was higher than 100 percent in some precincts in Michigan; that thousands of incorrect ballots were added to absentee ballots in Detroit; that voting machines in Pennsylvania converted votes for Trump into votes for Biden; and that across the United States ballots were cast by voters who were no longer alive. Recounts, civil lawsuits, and audits in several states all found that the allegations were baseless and that any irregularities were insignificant. Yet if Trump runs for president again – and loses again – he could make false accusations of voter fraud and irregularities that eclipse his claims of 2020. Allied Republican officials could then use such wild claims as a basis for manipulating election results.

Among Democrats, there are hopes that the multiple investigations against Trump will weaken his standing with voters. Instead, the investigations have only seemed to embolden him, making his apparent preparations to rig the 2024 election even more shameless. A grand jury in Georgia is not only looking into Trump’s phone call with Brad Raffensperger, but also his effort to create a slate of fake state electors to the Electoral College. Those probes are indicative of both the scale of the affair and Trump’s ability to withstand reputational damage that would finish other political careers. His impunity with Republican voters in Georgia and elsewhere could encourage Trump to again make false claims of election fraud in 2024 or set into motion events that could make the attack on Capitol Hill on January 6, 2021, pale in comparison.

If Trump or his allies succeed with their efforts to undermine the next presidential elections, a new administration could take office in 2025 that lacks the legitimacy of a fair and democratic electoral process. This would clearly have an impact on the international posture of the United States and on the ability of its democratic allies – including Germany and the EU who largely depend on the US as a reliable ally in NATO, a leading supporter of Ukraine’s defense against Russia, and a democratic partner in the systemic competition with rising authoritarian regimes – to align with it. Joe Biden’s attempts to create an alliance of democracies are already challenged by the fact that several long-standing democracies are backsliding. If the United States becomes one of those backsliders itself, European states may face the prospect of a new global split between Chinese-led autocracies and an alliance of transactional semi-democracies, leaving the EU with its aspirations to values-based leadership locked out.

This DGAP Commentary was published on September 19, 2022. 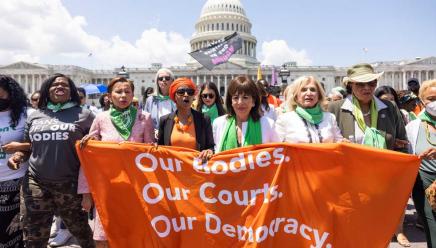