In a new paper released on January 19, the European Commission (EC) reiterated its commitment to strengthen the international role of the euro. This is part of a long-standing plan that has been followed by little action so far. Although the report is broad, it does not mention actions to be taken by the ECB – despite the fact that its role as a global lender of last resort is becoming ever more important to the international financial system.

Since the economic shock of the COVID-19 pandemic, the ECB has overhauled its euro liquidity provision to foreign non-euro central banks. The overhaul has involved reviewing existing arrangements and extending access to euro swap and repo facilities to non-euro area central banks – thereby helping the ECB to stabilize prices and mitigate financial stability risks domestically and abroad.

During the 2008 global financial crisis and its aftermath, the ECB had to make hard choices about its FX swap policy and adopted a very conservative line, precisely when it was enjoying the generous support of the Federal Reserve’s own US dollar liquidity lines. Indeed, between 2009 and 2011, the ECB refused to extend swap lines to Hungary and Poland when they were in a financial crisis and in need of euro liquidity, or to Latvia when the Swiss National Bank and the Swedish Riksbank respectively rose to the challenge of effectively offering support when the ECB should have also been there to help.

The new changes introduced by the ECB due to the COVID-19 pandemic do not go far enough in creating the framework to provide euro liquidity to those who may need it. The ECB’s bilateral lending framework – via swaps and repos – continues to create double standards between EU member states and lacks accountability and transparency. The ECB falls short of being a lender of last resort for financial systems that are dependent on euro liquidity. As a result, the ECB is failing to reduce financial stability risks and to promote the international role of the euro as much as it should.

In this paper, we first review in detail the shortcomings of the ECB’s new framework, which was announced on August 19, 2020. We then outline a more rigorous and systematic global Lender of Last Resort (LoLR) function based on three pillars:

In the hierarchy of instruments available to global lenders of last resort, FX swaps rank higher than repos. FX swaps create stability by protecting against volatility. In an FX swap, two countries’ central banks “lend” each other some of their own currency.

Let’s take a swap between Bulgaria and the ECB as an example. The Bulgarian central bank has a euro deposit and that account gets credited with the agreed sum in euros, at an agreed exchange rate and for an agreed period. Bulgaria pays interest on this loan of currency back to the ECB. But in return for euro liquidity it also creates a corresponding Bulgarian lev loan to the ECB. These FX swaps ensure the flow of hard currency/euro liquidity where and when it is needed and prevent financial instability from temporary liquidity shortages from setting in.

In contrast, repos are more onerous for the borrowing central banks for a variety of reasons. Sticking with our example, the Bulgarian central bank needs to have euro-denominated securities – rather than its own domestic currency – to post as collateral to the ECB to receive euro liquidity in return. Because securities are considered more risky than cash, the repo loan may also be subject to “haircuts” on collateral. To account for variation in the market value of these securities, haircuts may be complemented by a daily variation margin. Repo collateral is more difficult to service because, when the price of collateral falls, the Bulgarian central bank needs to send the ECB additional collateral to make up the value of the swap again.

The ECB resorts to double standards in its treatment of EU member states by offering liquidity on different terms to some nations. These double standards can be difficult to understand. For example, why would the National Bank of Hungary enjoy a repo line and not the National Bank of Poland? Why would the Danish National Bank enjoy a full swap line rather than a mere repo line when Denmark has opted out from joining the single currency, while Romania, which is openly committed to entering the eurozone, only enjoys a repo arrangement? As a  matter of principle, all countries in ERM2 – the managed exchange rate mechanism used in the transition period before a country joins the single currency – should enjoy a swap line from the ECB. There are numerous such examples of double standards. But there seems to be a political rationale beyond financial stability considerations for these distinctions. This could explain why Croatia (an EU member state) would enjoy a swap line while Serbia and Albania only have a repo line. But then why leave out Montenegro, which is on the EU accession track and has unilaterally adopted the euro as its currency?

Does the ECB introduce a political judgement on the various countries’ accession prospects? Or is it that the ECB does not want to sanction unilateral adoption of its currency? Whether it is one or the other, it should be spelled out with more clarity to justify the policy.

The Importance of Repo Lines for Foreign Central Banks

Because swaps rank higher than repos in the hierarchy of financial instruments, it is usually the instrument of choice for liquidity transactions between central banks. Repos are still the preferred method by which the Central Bank offers liquidity to commercial banks, adjusting the eligible collateral and the haircut proportionally to the perceived counter-party risk, the quality of the collateral, and the daily variation in the price of collateral.

FX swaps are less onerous for counter-party central banks because there is an established exchange rate between currencies. That means collateral doesn’t need a haircut to match the value of the liquidity received. Swaps are, in principle, reserved for central banks whose currency is more trusted or stable. However, this judgement of trust establishes a political distinction between trusted official peers and less trusted ones. This process of making distinctions is questionable within the EU and for countries on the EU accession track.

The creation of the Eurosystem repo facility for central banks (EUREP), follows a similar move that was made by the US Federal Reserve, and includes two important functions that should be disentangled:

The ECB should instead consider a simpler framework with three distinct facilities, detailed below:

This would put in place a permanent and unlimited swap line facility with the G10 and all the EU’s central banks, without discrimination. The heart of this agreement would essentially be the current permanent core swap line network (Federal Reserve, ECB, Bank of England (BoE), Bank of Canada (BoC), Bank of Japan (BoJ)).

In practice, this would see the ECB play a nodal role in distributing US dollars and euros to all European central banks, ensuring a stable flow of USD and EUR across the European financial system.

The ECB should offer temporary and limited repo lines to selected counter-parties for the purpose of facilitating trade and investment settlement. This would be particularly useful, for instance, for countries that trade with Europe but in which the banking system does not facilitate international commerce (think of African countries with weak correspondent banking links); or for countries with highly euro-ized banking systems that are not in the EU, such as Serbia, Turkey, or Lebanon.

Opening a standing repo and reverse repo line to all foreign central banks (with varying haircuts) would offer advanced custody and payment services in euros to all central banks. But it would also ensure the highest possible level of international euro collateral fluidity, which is important for the conduct of the ECB’s domestic policy and the control of its short-term secured funding rates.

The ECB should also consider creating a standing FX swap and/or repo facility that can be accessed in cases of distinct country-level distress – in particular alongside existing financial assistance programs such as the IMF and the EU Macro Financial Assistance Programme. While it may sound like this facility would duplicate the IMF’s work, in the 1980s and 1990s it was rather common for IMF programs to be complemented by Federal Reserve swap arrangements. When these became harder to come by, G10 central banks were called on to step in via the Bank for International Settlements (BIS). This happened in 1995 during Mexico’s peso crisis, which led to a $50 billion bailout package. An emergency assistance facility could be very useful today, for example to address Lebanon’s financial cum banking crisis.

The European Union wants to promote the international role of the euro in order to reap the benefits of issuing a true international reserve currency and provide a more stable and multipolar international monetary order, but the ECB’s framework for swap and repo lines is not up to the task. It should be revised profoundly to provide a simpler and more systematic set of instruments to limit potential liquidity risks in euros across the world – and to expand the role of the euro among foreign central banks.

The ECB has an opportunity to expand its pivotal place in the international monetary and financial system as one of the few central banks that is connected to both the People’s Bank of China (PBoC) and to the US Federal Reserve, but, in order to do so, it must accept further operational and counter-party risks. These are inevitable if the euro is to rise as a leading international reserve currency and help reshape the international monetary order. 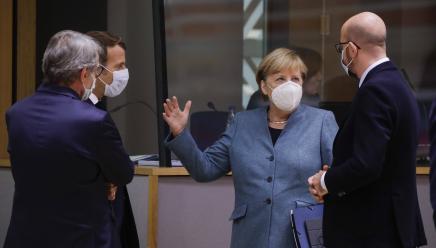 Europe is on track to repeat its fiscal policy mistakes

Governments are planning to cut deficits at the wrong time