Europe is on track to repeat its fiscal policy mistakes

The IMF spring meetings, the G20 meeting of finance ministers and the latest summit of EU leaders all seem to point to a failure of international economic policy co-ordination. While the IMF has called for ambitious international policy support, it is not leading by example and has only deployed about 10 per cent of its available lending resources.

G20 finance ministers have haggled about extending by six months a modest debt moratorium for developing countries, suspending a mere $14bn in interest payments. They have not even discussed a more ambitious, co-ordinated response. Steven Mnuchin, US Treasury secretary, has urged his peers “not to withdraw critical policy support prematurely”, but he is not able to pass through Congress the $1.8tn fiscal package that the White House says the US economy needs.

Meanwhile, European leaders last week deliberately avoided putting the EU budget and recovery plan on their summit agenda for fear of a breakdown in the talks. As a result, they have barely tried to bridge differences over the €750bn recovery and resilience package agreed in July.

Critical issues between the European Parliament and the member states remain, and a sword of Damocles therefore hangs over the whole plan. What seemed like a historic breakthrough in July increasingly looks like a quagmire that is consuming extraordinary political goodwill, creating lots of uncertainty and leading neither to a great Hamiltonian leap forward nor to a very meaningful fiscal stimulus.

What is most concerning, perhaps, is that many member states are still betting on a sharp recovery in 2021 and planning fiscal policy accordingly. Few really understand that while the political agreement of July might turn out to be a turning point for European fiscal federalism it will not on its own address the depth and breadth of the economic shock in 2020 and 2021. The initiative’s force lay in the fact that, by partly mutualising the recovery effort, it would politically sanction the already large national fiscal responses, as well as the European Central Bank’s sovereign debt purchase programme.

Next year’s German elections may inhibit a more open political discussion about the future fiscal policy and architecture of Germany and Europe.

The draft budgetary plans submitted by all member states last week suggest that this message has fallen on deaf ears. Indeed, the peak in national stimulus efforts seems to be behind us. Germany plans to reduce its budget deficit next year to 4.25 per cent of gross domestic product from 6.25 per cent this year. France is also planning to cut its deficit. This pair is setting the tone for the rest of Europe.

Meanwhile, the pandemic in Europe is not contained, the weekly death toll is moving towards its April peak and the economy is far from being on a firm recovery path. This European policy mistake-in-the-making bears many resemblances to the self-induced double-dip of 2011.

After some hesitation, the ECB has played its part in delivering significant stimulus and rightly called for a common European response. But it remains too shy in advocating a bold fiscal expansion by national governments.

ECB board member Isabel Schnabel has stressed that “these are not the times to worry that rising government debt today could undermine price stability tomorrow” and has applauded the common European fiscal efforts in the making. But she has failed to encourage more active national fiscal expansion. Unlike Jay Powell, chair of the US Federal Reserve, she has not stressed enough the risks of an economic setback from too little national fiscal support.

The European Commission is also failing to play its co-ordinating role and to press the eurogroup to deliver an appropriately expansionary aggregate fiscal stance. Indeed, letters sent by commissioners Valdis Dombrovskis and Paolo Gentiloni to European finance ministers do not issue a clear recommendation on the aggregate stance for the euro area in 2021 and might only timidly do so — too late — in December, when governments have already adopted their 2021 budgets.

Finally, while Germany has moved tremendously on European fiscal matters and delivered a bold expansion in 2020, it refuses to engage in a meaningful conversation around reforms of the European fiscal framework and the German constitutional debt brake. Both of these will continue to cast their long shadow on European fiscal policy.

Next year’s German elections may even inhibit rather than encourage a more aggressive national fiscal response and a more open political discussion about the future fiscal policy and architecture of Germany and Europe.

This article was first published by the Financial Times on the 18.10.2020. 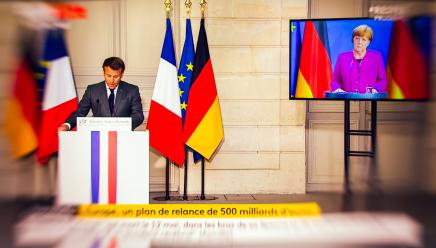 Pushing the EU to a Hamiltonian Moment