Civilian crisis management is an important element of foreign policy that aims to promote conflict prevention and lasting peace. A multilateral approach is key to German engagement in this context. That said, there currently seems to be a lack of political will and strategic approach to civilian EU missions. Often, ambiguity and sense of half-heartedness remain about when and why missions are established. Also, the EU and its member states face a shortage of suitable personnel. These factors help explain why the EU is not very active in civilian crisis management and falls short of both its own and international expectations. Germany, however, is helping set the pace in civilian crisis management and should press for coordinated personnel contributions for jointly agreed mission objectives. In this way, the EU will strengthen its capacity to act and take decisions in – and ideally before – future crises.

The European Union’s security environment is characterized by fragile states, simmering trouble spots, and an increasingly fragmented global order. Recent events in Afghanistan provide a horrifying example of the major challenges and risks of international engagement from which lessons must be learned. Nonetheless, work to promote peace and stability in Europe’s neighborhood will continue to play a role – not only with the aim of protecting the EU’s security interests, but also in the service of EU norms such as the rule of law and human rights. The Common Security and Defense Policy (CSDP), with its civilian missions, offers a political instrument to enhance stability and security in partnership with the countries concerned. Particularly for Germany, civilian methods are of key importance and lie at the heart of its integrated approach.

A Lack of Strategy and Personnel Shortages

Despite the deteriorating security situation, the number of personnel involved in what usually were already small missions has decreased by half since 2010. This is primarily due to a lack of strategic direction. Civilian CSDP requires a clear vision of what civilian methods should achieve. Such clarity allows for ad hoc agreement to be reached on a mission in the event of a crisis and a mission’s effectiveness to be measured – subsequently after it ends, too. Without this clarity, there will likely also not be enough political will to ensure that the necessary personnel are available. Personnel shortages, in turn, make it more difficult to establish missions. This vicious circle can be broken. But doing so requires a clear strategy that sets out the necessary capabilities and personnel requirements, as well as the political will needed to implement it.

Germany’s Role in the EU and as an EU Partner

Germany plays a pioneering role in civilian crisis management. By establishing the Center for International Peace Operations (ZIF) in 2003, it made a long-term commitment to civilian methods at an early date. ZIF sets standards for how civilian personnel can be trained and kept ready for missions in areas affected by crisis. However, a multilateral approach is important for German foreign policy, including in the context of civilian crisis management. Cooperation with European partners is therefore vitally important when it comes to translating this approach into joint missions. EU member states play a decisive role in CSDP: They establish the mandates for missions in the Foreign Affairs Council (FAC), and also contribute the necessary personnel. No military personnel or civilian experts are sent to a crisis area unless all member states agree. By helping to establish the European Centre of Excellence for European Crisis Management (CoE) in September 2020, Germany hopes to contribute to pooling and enhancing the civilian capabilities of EU member states. Yet, investing in improvements at the operational level alone cannot have any real impact. It is important for the member states to provide strategic leadership, i.e., to agree on the issues that can be addressed with the tool of civilian crisis management, how its success should be measured, and how autonomous it should be from other actors (e.g., the UN, NATO). These are topics that are currently being discussed in the framework of the EU’s Strategic Compass process.

Germany should be a staunch advocate for strong civilian crisis management at the EU level. Rather than being limited to a few dozen experts focused on monitoring and providing advice, missions on a larger scale could, for example, protect cultural heritage, carry out deradicalization work, provide support in tackling disinformation, take the intersections between conflict and climate issues into account, and carry out confidence-building measures at the local level – always in line with the demands of the conflict and the needs of the civilian population. This kind of engagement would also help to ensure that the EU can better meet the expectations of international partners in the field of security policy.

To ensure that the FAC can react in a crisis, it should be able to draw on a repertoire of prepared decisions. The member states can only hold the required personnel in readiness if they know how many people are potentially needed and what qualifications they should have. For example, national planning should take into account how many additional police officers have to be factored in for deployment abroad, and how such assignments can be optimally integrated into career paths. A public debate, for example about the deployment of police officers to CSDP missions – which some regard as indicating a trend toward border management, or view as competition for increased resources for FRONTEX in terms of personnel and strategy – could also breathe new life into the often stale German discourse on security. Rather than fixating on the two percent debate, Germany could then focus on important fundamental questions relating to a comprehensive security policy.

If Germany wishes to engage credibly in civilian crisis management, it needs clear objectives in the EU for CSDP missions. It also needs the member states to be able to contribute more personnel with a wider range of qualifications. Therefore, the next German government should press for a concrete strategy, suitable resources, and effective structures:

Enhancing Strategic Objectives: The Civilian Components of the CSDP

Civilian crisis management that aims to make a significant difference must be more comprehensive and established on a larger scale. To this end, the member states should define clear objectives that provide guidance for national and European planning and decision-making processes.

The German government should press for a coordinated planning process by the member states that identifies personnel requirements so that these capabilities can be made available on the basis of fair quotas and a realistic timetable. In addition, missions abroad should be incorporated in planning in the public service – for example, in the judiciary, which is already experiencing personnel shortages.

In the event of a crisis, the FAC should be able to agree reliably on the size and mandate of a mission on the basis of strategic objectives that have paved the way for joint action. In addition, the German government could press for the FAC to be able to entrust a group of member states with the implementation of a task under Article 44, or for it to be able to take decisions by a qualified majority vote. 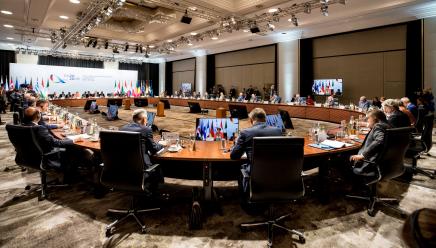