Azerbaijan’s multiple attacks on Armenia on September 13, 2022, mark a new escalation in the conflict over Nagorno-Karabakh. The large-scale violence impacts not only the future of the disputed region but also Armenia’s sovereignty and territorial integrity. If the EU and the United States continue to sit out the conflict, Azerbaijan will win by “authoritarian conflict resolution.” The EU’s policy of “peaceful conflict resolution” is, therefore, at stake – as is its credibility as a normative power.

Baku’s goal is to push Yerevan into a peace deal on Nagorno-Karabakh on Azerbaijani terms and to enforce a geographic link, which it calls the “Zangezur Corridor,” through southern Armenia to establish a direct connection between the Azerbaijani mainland and the exclave of Nakhichevan. Armenia already committed itself to “guarantee the security of transport connections” between the two areas in a ceasefire agreement of November 9, 2020, but the status of these connections is in dispute.

This latest escalation comes at a time when Armenia’s “protector,” Russia, is weakened by its war against Ukraine and, more immediately, by Kyiv’s recent successes in the Kharkiv and Kherson regions. Russia has long maintained a military base with approximately 3,000 soldiers in the Armenian city of Gyumri but recently redeployed some of its troops to Ukraine. The Kremlin replaced some of its 2,000 “peacekeepers” in Nagorno-Karabakh with conscripts. Following a request from Yerevan, some Russian border forces also moved to the border regions with Turkey and Azerbaijan. But the aim of this redeployment was to deter Azerbaijani military aggression, not stop a military attack.

Baku evidently views Russia’s weakening as an opportunity to use armed forced to impose its preferred interpretation of the 2020 ceasefire agreement. Its timing may be favorable. Russia appears willing to compromise, at Armenia’s cost, to reap benefits from better relations with Azerbaijan and its ally, Turkey. Azerbaijan and Russia may have coordinated some moves since the “peacekeepers” in Nagorno-Karabakh reacted slowly to Baku’s aggression in recent months, inviting the latest escalation. Only a strong US reaction, not a Kremlin-brokered ceasefire agreement, prevented a further deterioration of the situation. Two days after the aggression, Yerevan and Baku reached an agreement that ushered in a period of calm. A visit by US House of Representatives Speaker Nancy Pelosi has also lowered tensions. But the situation remains fragile, and another flare-up could happen at any time. There are already rumors of a second front on the border between Nakhichevan and Armenia, where Turkish-backed Azerbaijani troops are amassed.

With its advanced weaponry and overt Turkish military and diplomatic support, Azerbaijan has the upper hand in the post-Soviet region’s most violent ethnic conflict, which killed about 30,000 people in the early 1990s and approximately another 7,000 in 2020. Armenia, almost wholly dependent on Russian security guarantees, is in a weak position. The Kremlin’s usual levers, oil and gas, are ineffective in this case since Azerbaijan is an exporter of both to Europe. This did not stop Russia from exploiting its position as a broker in the 2020 war to improve its bargaining power by stationing “peacekeepers” on Azerbaijani soil to protect ethnic Armenians. But Baku seems to feel in a position to press for a Russian withdrawal. Its peace plan comprises five points including mutual recognition of Armenian and Azerbaijani territorial integrity, border demarcation, and open transportation links. The plan does not address Nagorno-Karabakh since the region is internationally recognized as Azerbaijani territory. Protection for the region’s ethnic Armenian population, however, remains an open question if Russian “peacekeepers” leave. Ethnic cleansing is a potential outcome; both sides committed it after the Soviet Union’s collapse.

Geopolitics and Connectivity in the Southern Caucasus

Azerbaijan is not the only country seeking to improve connectivity across Armenian territory along the “Zangezur Corridor.” Turkey is interested in gaining direct and speedy access to Azerbaijan, and, subsequently, the Caspian Sea and Central Asia. But Russia’s interest in the corridor, a potential way to circumvent Western sanctions via trade with Turkey, is of paramount importance. Russia, Azerbaijan, and Iran have already reached agreement on a north-south transport corridor in a sign of the growing significance to the Kremlin of southern trade routes. The agreement is also a sign of waning support for Armenia, which is set to lose even more control over its territory when a connection to Nakhichevan under Azerbaijani terms is established. At both the political and popular level, Armenia is hugely disillusioned by Russia, its traditional ally and protector. But Armenian society is alienated from the West, too. Back in 2018, in the immediate aftermath of the “Velvet Revolution,” Armenian protestors had high hopes for the democratization of their country and its rapproachment with the EU. They were bitterly disappointed by the lack of support by democratic countries during the 2020 war. The slogan “democracy or stability” promoted by the opposition under former president Robert Kocharyan, which has close links to Russian president Putin, is gaining popularity in parts of the society.

Support from other sources has also been lacking. The Organization for Security and Co-operation in Europe’s (OSCE) Minsk Group, under co-chairs France, Russia, and the United States, was created in 1992 to find a peaceful solution for the Nagorno-Karabakh conflict. But Russia (and Azerbaijan) sidelined the effort two years ago to broker the 2020 ceasefire agreement. This heralded the conflict’s regionalization, with Turkey’s indirectly influencing the negotiations. The EU was all but absent until European Council President Charles Michel established an alternative platform for negotiations between Azerbaijan and Armenia. In four meetings until the end of August, the two leaders discussed a peace treaty, humanitarian issues, connectivity, and border delimitation. But the initiative, despite being a valuable alternative to Moscow-dominated negotiations, was a personal one from Michel and his office without EU member state support. It, therefore, lacked the heft to gain real traction.

The conflict is far away for most EU member states, and they show no appetite to engage in a volatile region in light of Russia’s war against Ukraine. Furthermore, Georgia has long been the EU’s key country in the region, and the EU has already granted it association (2014) and visa (2010) agreements. Yerevan had been seeking similar arrangements, but Russian pressure resulted in only a watered-down Comprehensive and Enhanced Partnership agreement. And yet the truth is that Georgia has been backsliding for years with obvious effects for the rule of law, media freedom, and political polarization. The ruling Georgian Dream party now campaigns against the EU (and the United States) despite an offer of potential candidate status. Armenian society is, unsurprisingly, uncertain about their country’s prospects. European Commission President Ursula von der Leyen’s trip to Azerbaijan in July 2022 only worsened matters. She bolstered an impression of double standards by not criticizing the country’s problematic reputation for human rights while gushing about a gas deal.

The Second Nagorno-Karabakh War 2020 will rank as one of the 21st century’s key conflicts, occurring at the nexus of Europe and Asia, and Russia and the Middle East. Azerbaijan established a precedent by brushing aside nearly 30 years of multilateral negotiations, and EU-backed dialogue and trust building projects, to bluntly use military superiority to take back the seven territories around Nagorno-Karabakh that Armenia occupied in the early 1990s. This marked a logical conclusion to Yerevan’s decades-long failure to negotiate a peace agreement while it had the upper hand. But Armenia was not alone in squandering advantages. The EU and the United States, after repeated failures to negotiate a peace agreement, outsourced the conflict to Russia. For Azerbaijan these failures have left the impression that there is no ground for a “peaceful solution.” Therefore, Baku decided, that “conflict resolution” can only be imposed with sophisticated weaponry and military support of regional (authoritarian) powers such as Turkey. Recent moves, such as the American appointment of a new Minsk Group co-chair, are important, but the United States may be viewing the conflict through the lens of its relations with Russia while the OSCE format still lacks credibility. The recent statements by Nancy Pelosi support this argument.

The lack of serious EU engagement is a blow to the bloc’s normative power. Brussels and the member states are apparently unwilling and, therefore, unable to shape their neighborhood constructively, even as Russia weakens and the war in Ukraine accelerates the disintegration of post-Soviet territory. Turkey, meanwhile, is moving into the South Caucasus as China advances in Central Asia. The pair are creating their own authoritarian alternatives to Russia, all while making side deals with the Kremlin. And Iran will not stand by as rival Turkey makes inroads. The scenario threatens to draw in other external actors.

Only an internationalization of the conflict will bring sustainable peace to Nagorno-Karabakh, and between Azerbaijan and Armenia. The EU needs to step in if the UN cannot engage, and if Russia and Azerbaijan continue to ignore the OSCE. Nagorno-Karabakh needs an international peacekeeping mission, and the border between Armenia and Azerbaijan needs a monitoring mission. The EU can provide both. It will continue to lose credibility in the South Caucasus and beyond, and cede advantages to authoritarian states, if it does not.

The EU has been trying to reinvent itself as a geopolitical power. To do that, it needs to apply principles of realpolitik to this conflict. The bloc is an important market for Azerbaijani hydrocarbons. Baku needs international legitimization of its Nagorno-Karabakh policy, which Russia cannot give. Azerbaijan also needs substantial investment to rebuild recaptured territory and to advance its goal of becoming a hub between Asia and Europe. Meanwhile, Russia is no longer a provider of “authoritarian stability.” And the five-year agreement that put Russian “peacekeepers” in Nagorno-Karabakh has no internationally recognized mandate and is coming to an end in three years if no extension is forthcoming. All this could give the EU, if it can see the interconnection among Central Asia, the Caspian Sea, the South Caucasus, and the Black Sea, more leverage in those regions. That would allow opportunities for managing conflict, building and protecting transit routes to Asia, managing the disintegration of post-Soviet space, and limiting the influence of authoritarian states. The old notion of normative power is at stake in this conflict, precisely at a time of intense geopolitical competition.

This Online Commentary was published on September 20, 2022.

Program
Center for Order and Governance in Russia, Eastern Europe, and Central Asia

Dr. Stefan Meister
Head of the Center for Order and Governance in Russia, Eastern Europe, and Cent…
Twitter
@meistefan1 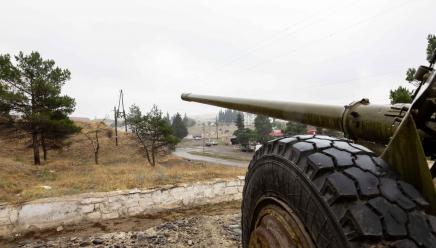