Although the calculated humiliation of the EU’s foreign policy chief Josep Borrell in Moscow in early February is hard to swallow, it provides a useful lesson. Rather than conducting a postmortem of Borrell’s visit, the EU should focus on a Russia that is increasingly repressive at home, confrontational in foreign affairs, and selective toward EU countries. The EU Foreign Affairs Council on February 22 should respond with firmness and unity, preparing for more tensions in the course of 2021.

Despite the odds against a successful outcome, EU High Representative Josep Borrell went ahead with his planned visit to Moscow on February 5 and 6. His goal, as he later explained it, was to test whether the Russia of President Vladimir Putin is “interested in a serious attempt to reverse the deterioration of our relations and seize the opportunity to have a more constructive dialogue.” While many warned Borrell about the bad timing of his trip, the EU delegation in Moscow was concerned that traveling there at a later date could be even worse. In a DGAP online discussion at the end of January, its representative pointed to an intensifying crackdown on Russian civil society and the ruling that is expected next month in the trial over the murder of an exiled Chechen in Berlin, for which Russian “state authorities” are blamed.

The fact that Borrell’s team saw his talks with Russian Foreign Minister Sergey Lavrov as the last window of opportunity for political dialogue is important. They turned out to be a fiasco – Borrell was publicly humiliated by Lavrov and three European diplomats were expelled from Moscow. Consequently, it will be tempting for EU politicians to turn inward and focus on Borrell’s performance during his visit. It is, in fact, a trap into which the European Parliament already fell in its plenary discussion on February 9. Yet, the EU needs to resist this temptation and instead seriously rethink its current approach to Russia.

Russia clearly showed that it is not interested in a political dialogue with the European Union and will pursue its domestic and foreign policy goals regardless of the EU’s positions. [For further analysis on why, please see the DGAP Report “Russian Foreign Policy in 2020.”] Hence, the EU must concentrate on drawing the right conclusions from the Moscow debacle and on preparing policy initiatives for the Foreign Affairs Council on February 22 and the European Council in March, as the High Representative already announced.

A Taste of Russia’s Anti-European Diplomacy

Borrell’s visit to Moscow revealed two main things. First and foremost, it exposed the “new normal” of Russian foreign policy toward Europe. By accusing the European Union of being an “unreliable partner,” Foreign Minister Lavrov meant that the EU still struggles to match steady engagement with a recurrent squeamishness about Russia’s domestic affairs. Leading Russian foreign policy pundits made Lavrov’s message more clear: Europe should learn that it has no say at all in Russia’s internal affairs. According to them, “[that] era is over,” any criticism will be rebuffed, and only interest-based relations remain possible.

This message was correctly identified by Borrell himself. Writing the day after his return from Moscow, he acknowledged that “Europe and Russia are drifting apart” and that “Russia is progressively decoupling itself from Europe and regards democratic values as an existential threat.” This “new normal” emphasizes Russia’s sovereignty over its domestic affairs. It will find expression in aggressive public statements and the projection of an image of strength by the EU toward both the Russian state elite and pro-Putin public opinion. In essence, it is diplomacy driven by – and also addressed toward – the siloviki, Russia’s security sector.

Secondly, the visit revealed that Russia will try to further exploit the EU’s own divisions. Through “punchy public diplomacy,” Moscow will selectively target individual member states. For example, while embassy staff from many European countries were observing protests on January 23, as were their general consulates across Russia, only diplomats from three EU member states were selected for expulsion. Germany was punished most severely with the expulsion of the head of the political section of its embassy in Moscow. This move could be understood as a pre-emptive warning against the current German government – in particular, its conservative camp – changing its approach to the Nord Stream 2 pipeline. Sweden, an active chair of the OSCE, lost a diplomat from its consulate general in St. Petersburg. Poland, a favorite punching bag of President Putin, likewise lost a diplomat.

The Domestic Weakness Behind Russia’s Posturing

The reasons for Russia’s robust stance toward the EU were internal – no matter how skillfully the Russian Foreign Minister tried to hide this fact. As Putin’s system fights for control of the domestic narrative in the run up to State Duma elections in September 2021, it has zero tolerance for Europe’s public criticism of its internal affairs.

After the failed assassination of opposition leader Alexey Navalny and the humiliating identification of the responsible operatives from the Federal Security Service of the Russian Federation (FSB), a wave of international support allowed Navalny to mobilize his supporters and the broader public. His investigative documentary about “Putin’s castle” was seen by every fourth Russian via the internet, circumventing state-controlled television.

These developments have deepened festering weaknesses in Putin’s regime, which has grown even more authoritarian. Although it is well prepared to defend the status quo – and itself – with all possible means, the regime has no vision for the future and is not able to deal with real opposition on political terms. That is a serious vulnerability. Russian society has grown estranged from the political class, having been excluded from state decisions for years. It is now looking for political alternatives. Navalny has become a leading opponent and the main challenger of the Putin system around whom an alternative vision of Russia’s future might be crystallized.

The sheer geographical extent of the recent protests in support of Navalny, complemented by a steadily declining level of approval of President Putin, poses a serious challenge for the Kremlin ahead of the elections this autumn. Putin may still be the most popular politician in the country – with 29 percent of respondents to a recent survey trusting him, way ahead of ministers, deputies, and Navalny – but his charisma is insufficient to quash the demands of protestors or address the social and economic concerns of the Russian people. His rating is especially low among young people who do not trust state-controlled television and take to the streets.

The Kremlin Can Still Manage

Nevertheless, despite the seriousness of the challenge, the Kremlin can still hope to preserve power. Navalny’s disapproval rating is growing faster than his popular approval. In particular, elderly people who watch TV are skeptical about him. The Kremlin is cleverly responding by deepening this polarization, relying on its hard-core electorate – voters who directly depend on the state – and the siloviki who are raising the costs of attending protests and intimidating those who are turning against the system. Furthermore, the regime has demonstrated its strengths in managing the electorate and keeping control over ballot access.

Of course, Navalny’s team could challenge the Kremlin with its tactical voting system “Smart Vote,” which proved sufficient to defeat some candidates from the ruling United Russia party in regional elections. Moreover, the Kremlin will have to deal with this prominent prisoner not only domestically, but also in its relations with the European Union and the United States. Navalny’s team will be simultaneously calling for people to take to the streets and trying to “get him out of prison using foreign policy methods.” So far, the Kremlin has given aggressive answer in both directions, inward and outward.

Lavrov is confident that the EU now needs Russia more than Russia needs it on relevant geopolitical issues such as Iran, Libya, Syria, Belarus, and the Sputnik V vaccine. He therefore called on EU leaders to opt for transactional and pragmatic cooperation with Moscow. For its part, the Kremlin will prioritize pragmatic bilateral relations with certain EU countries based on mutual interests while punishing others.

It is time for the EU to show that Lavrov’s presumption is no longer true. This will require firmness and a unified approach – one that adapts the current shallow consensus on “selective engagement with Russia” among the 27 EU capitals to the new reality. If Germany played a more active role behind the scenes, Berlin could, in close coordination with Paris and Warsaw, at least set the tone and prepare ground for a strategic re-assessment of the so-called five guiding principles on EU-Russia relations from 2016. While this exercise runs its course, we recommend the following:

First, the EU needs to reaffirm that progress in cooperation with Moscow on health or global issues will not lead to cross-topic concessions by Germany or France; nor will such progress result in bargaining over support for democratic freedoms in Russia and positions on regional issues, including the territorial integrity of Ukraine and the EU’s other eastern partners. This reaffirmation would make it easier for critical EU partners to live with the status quo on Nord Stream 2 or French President Emmanuel Macron’s bilateral outreach to Moscow on security and Africa.

Second, only a more muscular approach can change Moscow’s calculus about foreign policy offenses. Russia currently believes that it can risk breaching established norms of diplomacy toward Europeans because they do not hit back. After Germany’s Federal Foreign Office announced on February 8 that it had expelled a Russian diplomat of a similar rank, Berlin could, however, raise the stakes and turn to the solidarity of its European partners, in particular France.

Third, as Borrell already announced, the EU should make use of its new human rights sanctions. It should prepare a list of Russian officials to blacklist over the poisoning and jailing of opposition leader Alexey Navalny. Indeed, because Navalny’s return from medical care in Germany and his sentencing on February 2 was a tipping point for EU-Russia relations, it is logical to follow through with consequences.

Fourth, the EU needs to counter the Kremlin’s isolationist drive and anti-Western policies with a long-term approach to engage with Russian society. At their summit in March, EU leaders could initiate a working group on simplifying and liberalizing the visa regime with Russia that is aimed at young people, civil society, and academia.

Fifth, as Putin’s Russia is drifting further away from international law and its obligations within bodies including the Council of Europe and OSCE by using them only for its own interests, Europeans could play more active role in multilateral organizations and double down on international obligations in favor of Russian citizens. For instance, Germany could use its chairmanship of the Committee of Ministers at the Council of Europe to promote the speeding up of rulings in cases on unlawful detentions at peaceful protests and Russia’s 2012 “foreign agent law” at the European Court for Human Rights in Strasbourg.

Finally, Germany and other EU member states should reinvigorate transatlantic dialogue on Russia – and its role in regional conflicts around Europe – with the new administration of US President Joe Biden. In Moscow, this is already taken as a foregone conclusion, but the Kremlin does not yet fully understand how its humiliation of the EU’s foreign policy chief made that dialogue much easier. 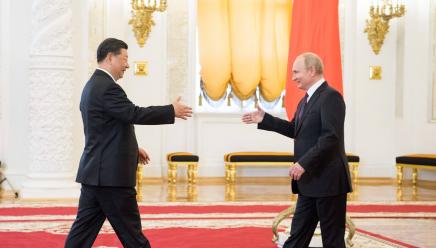