How military innovation can benefit from cooperation

In recent years, Germany and the UK have expressed a desire for closer cooperation in the area of defence. Any such cooperation also has to look ahead and think about strategic challenges of the future. Both the advance, as well as the convergence, of some critical technologies are expected to change how humans live, work, play – and wage war. With tightening financial resources and a challenging economic situation, cooperation in the field of military innovation would be fruitful for both Germany and the United Kingdom.

Yet, when looking closer at how both countries approach this issue, there is clear divergence in their respective preparedness for military innovation. This poses some challenges but also offers opportunities to learn from one another.

Both Germany and the United Kingdom see themselves faced with a return of great power competition and the threat of peer-to-peer conflict. With it, the importance of new areas such as cyber and space increase significantly, as the new state competitors can operate more easily in these domains than insurgents and non-state actors. At the same time, rapid technological change often coincides with a wealth of new ideas about war and warfare. Today, developments in robotics, digitisation and automation have huge potential to change the future of warfare.

Operationally, both armed forces recognise the importance of certain mega-trends, with access and control of all five domains (land, air, sea, space, cyber) to be heavily contested and with growing threats to the information environment. Both armed forces expect the struggle for information – its generation, distribution, and effective use – to be a key battleground.

Investment in military innovation therefore becomes paramount in order to keep abreast of these developments. However, the UK and Germany have slightly different approaches for how to deal with the growing relevance of the new military domains. The UK focuses more on doctrinal changes and technologically advanced training. And while the UK Ministry of Defence seems to funnel serious investment into advanced and digital training possibilities for its forces, nothing on that scale exists in Germany.

There are two key challenges for military innovation that both countries face: balancing limited financial resources and the political-military support for such technological advances. First, constrained resources will likely form the background for military innovation in both Germany and the United Kingdom. This will remain true despite the recent defence spending review announcement by the British government. Both armed forces need to finance ongoing legacy programmes and capabilities while weighing the amount of investment into new technologies and domains against it.

Political leadership currently does not massively interfere with force-planning, leaving the armed forces free to come up with their visions of future warfare. However, this model might run into problems. In particular, the integration of uninhabited systems and the idea of automation and (a level of) autonomy in weapons systems is a political and societal concern in Germany and the UK. Hence a potential misalignment between military visions and means of future warfare, on the one hand, and political support for further research and implementation, on the other hand, might arise.

While both countries indeed maintain capable defence industrial ecosystems, the UK and its more open system are better positioned to take full advantage of traditional and non-traditional suppliers involved in defence innovation. Its instruments are better designed to capture technological innovation across the whole spectrum, while current German defence instruments too narrowly focus on digitalisation. Its focus on digital and cyber innovation might achieve digitalisation and networking of assets as central requirements of future forces. Still, robotics and automation are not included in this – at best, these areas are entrusted to traditional actors such as large defence companies.

The German defence ecosystem has culturally induced blind spots in emerging technologies that are not software (eg robotics), and so far also does not seem keen on reforming key doctrines and training methods. Overall, visions of operational challenges and industrial efforts seem more aligned in the United Kingdom, where there is broader scope for potentially useful technologies and collaboration between actors. Moreover, it puts more effort into user-centric approaches like prototype warfare.

A small set of interacting cooperation initiatives could help both countries to mitigate resource scarcity and help – especially Germany – to overcome their blind spots:

This report is part of a Policy Institute project investigating defence cooperation between the UK and Germany, funded by the Hanns Seidel Foundation. It was first published by the King's College London on Novemeber 25, 2020 here. 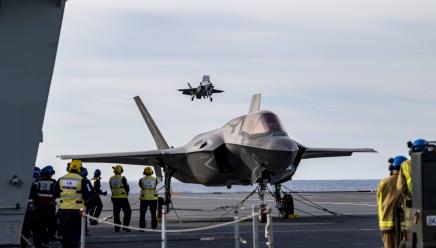