EU Enlargement – A Will But Not (Yet) a Way

At the European Council summit on June 23, the attempted U-turn on enlargement policy got stuck halfway. While nominating Ukraine and Moldova in record time as candidates to join the EU, member states failed to end the stalemate over Western Balkan accession. But Bulgaria’s veto is not the biggest obstacle. The current process is dysfunctional and needs concrete reforms that build the rule of law and bridge economic gaps in accession countries so the EU can finally deliver on its side of the accession promise.

In recent years, the European Union (EU) and Western Balkans have certainly had no lack of summit meetings. Leaders from the EU and (potential) candidates from South East Europe (SEE) gathered virtually in Zagreb in 2020 and in Brdo in 2021. They took part in high-level meetings of the so-called Berlin Process hosted by Bulgaria and North Macedonia in 2020 and by Germany in 2021. But for all the talking, there have been few tangible results. In 2019, French demands for a new accession methodology triggered a blockade that was seamlessly prolonged by Bulgaria’s refusal to open membership talks with North Macedonia. EU leaders have even bickered about the use of the word enlargement in summit declarations, demonstrating the thin ice on which the rhetorically unanimous support for the EU perspective on the Western Balkans’ rests.

The Zeitenwende on Balkan Enlargement Is Yet to Arrive

The June 23 summit did little to raise hopes for transformational change. Earlier this year, German Foreign Minister Annalena Baerbock and EU High Representative Josep Borrell had called Russia’s aggression against Ukraine a wake-up call for the EU’s approach to the Western Balkans, a spur to finally deal with unfriendly foreign influences there. And yet, when leaders met, Bulgaria continued to block the opening of membership talks with North Macedonia, instead prioritizing a domestic political agenda based on its cultural identity. Bulgaria’s veto also holds Albania hostage because the two accession hopefuls are bracketed together.

Moreover, the summit reiterated a general failing: EU member states did not honor the key principle that candidates will advance on their EU path once they fulfil set conditions. For example, the member states once again denied Kosovo visa liberalization although the European Commission confirmed it had already fulfilled all benchmarks in 2018. The Council did, however, make the right call when it declined Slovenia’s proposal for it to grant Bosnia and Herzegovina the same candidate status that it just gave Ukraine and Moldova. So far, Bosnian leaders have offered little progress that the EU might reward.

Disappointed, even furious about the mediocre results, the leaders of Albania, North Macedonia, and Serbia held a joint press conference asserting the demise of the EU’s credibility and its capacity to act, while European Council President Charles Michel, French President Emmanuel Macron, and European Commission President Ursula von der Leyen cancelled their own press conference “due to time constraints.”

Like Greece, Slovenia, and Croatia before it, Bulgaria is hijacking the EU integration process to impose its personal demands on a candidate country. While the EU clearly needs to abandon the unanimity requirement for enlargement, shifting voting rules is not the biggest construction site in the EU’s enlargement architecture. Throughout the last decade, the EU has been unable to foster successful political and economic transformation in the Western Balkans. Although the EU made several adjustments to its enlargement strategy – the last of which saw it adopt a revised accession methodology in spring 2020 – it has fallen short of creating a process for the Western Balkans that encourages such large-scale transformation. And yet this is essential for candidates and potential candidates, and especially for their citizens.

Get Real on Democracy and the Rule of Law

The EU must do more to encourage political transformation – namely, build the rule of law in (potential) candidate countries. The discrepancy between the EU’s objectives and their impact is startling. Most adjustments to its accession strategy over the past decade have aimed to ensure that rule of law reforms are more than box ticking exercises. But Freedom House downgraded Serbia and Montenegro (alongside Hungary) to transitional/hybrid regimes in 2020, and now no Western Balkan country can call itself a democracy. The annual EU Country Reports have shied away from addressing this reality. And EU decision-makers have refrained from using the available instruments – such as the suspension of accession negotiations – to correct the slide and punish flagrant and systematic violations of rule of law principles.

The EU urgently needs to change how it assesses and reports on candidates’ performance. As member states are evidently reluctant to call out candidate countries on democratic backsliding and stalled reforms, independent expert assessments are required. They must be objective, comprehensible – that is, not coded in the language of EU bureaucracy – and comparable. Voters must be able to judge for themselves whether their government has done a good job on EU integration. Likewise, the reforms must ensure that both backsliding and stalemates trigger consequences for the accession process. The EU’s failure to suspend negotiations or funds when candidates systematically violate the rule of law merely signals complacency to the authoritarian strongmen of the region. It cements the very illiberal tendencies the EU does not want to import by taking in new member states.

The second conditio sine qua non for transformation is to support candidate countries with adequate financial means. The current pre-accession funds are only a fraction of the support that EU countries in Central, Eastern, and South Eastern Europe receive. Instead of bridging inequalities in economic development between member states and candidates, this exacerbates them. To illustrate this gap, the newest member state Croatia is slated to acquire nearly double the sum of all six Western Balkans states together under the EU’s 2021 to 2027 multiannual financial framework and Next Generation EU funds. Allocations of EU funds per capita are seven times higher for Croatia than for its non-EU neighbors. Of course, candidates must be able to absorb the money, and there must be efficient controls on the granting schemes and use of EU funds, but there are multiple ways of achieving this.

The Economic and Investment Plan that the EU launched in October 2020 is not the game changer it was meant to be. Its goal (to modernize the Western Balkans’ economies and provide a viable alternative to Chinese and other investors’ infrastructure projects) is commendable. But, as suggested by a recent study requested by the European Parliament’s AFET Committee, nine billion euros of grant funding provided throughout the next seven years will hardly be sufficient to achieve this. Bolder steps are needed. These might involve raising budget transfers for the Western Balkans to the level of EU member states. According to estimates for the Western Balkans, such a step would cost 0.04 percent of the Germany’s GDP and around 0.025 percent of France’s. As for the new eastern candidates, the budgetary burden would also be manageable: the size of Moldova’s economy is small, while the EU is already mobilizing massive financial support for Ukraine.

Translating Political Will Into a Scaled-Up Accession Process

It would be unfair not to recognize that the accession perspective – in light of Moscow’s threat to peace and security in Europe – is far more concrete than before Russia invaded Ukraine on February 24. Fearing spillover effects to the Western Balkans, member states have vowed to speed up the region’s EU integration. They may finally unlock the incentives that are the main currency of its claim to transformative power. A solid prospect of joining the EU could help resolve long-standing conflicts in the Western Balkans, first and foremost between Belgrade and Pristina. However, to leverage this power, the EU needs to stop treating the enlargement process as a technocratic exercise that focuses on the formal progress of (potential) candidate countries. What matters is its actual impact on the ground.

For now, EU leaders seem hesitant to take bolder steps. In May this year, Michel argued for a “gradual, phased integration.” The June 23 to 24 conclusions of the European Council also speak of “gradual integration between the European Union and the region already during the enlargement process itself in a reversible and merit-based manner.” This could mean partial membership or integration into policies without voting rights for EU candidates. If these are stepping-stones to full membership, such measures – crucially, candidates’ Internal Market integration – are well suited to firmly tie candidates to the EU even before accession. Reforms should focus on a model of step-by-step integration rather than the vaguely defined concept of a European political community that risks diverting attention from the accession framework.

Especially now that the number of EU aspirants has grown from six to nine, it is high time for the EU to translate its ambitions for Europe’s East and South East into a scaled-up accession process. So far, leaders have opened the door to new candidates from Eastern Europe, but they have not delivered on their side of the accession promise to the long-standing candidates from the Western Balkans.

This online commentary was published on June 30, 2022. 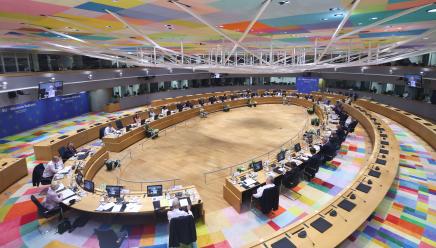