As head of DGAP Study Groups, Henning Riecke is responsible for the Study Groups on “Strategic Issues” and “European Policy”; he shares responsibility for “Future Global Issues.” Riecke’s research focuses on “International Order and Democracy.” He served as head of DGAP’s USA/Transatlantic Relations Program from 2009 to 2019.

Prior to joining DGAP in 2000, Riecke was a Thyssen Post-Doctoral Fellow at the Weatherhead Center for International Affairs at Harvard University, where he worked on a project on US small arms and light weapons policy. Between 1994 and 1999, he held several positions at the Center for Transatlantic Foreign and Security Policy Studies at the Freie Universität Berlin. In 1995, he spent five months as a visiting fellow at the Center for Science and International Affairs at Harvard’s Kennedy School of Government.

Riecke earned his PhD in political science at the Freie Universität Berlin with a dissertation on the Clinton administration’s nuclear non-proliferation policy. He studied political science, history, national economy, and international relations in Frankfurt/Main and Berlin.

Mission Possible in the Strait of Hormuz

Giving a flat “no” to a naval mission to protect shipping in the Persian Gulf does not solve Germany’s dilemmas. 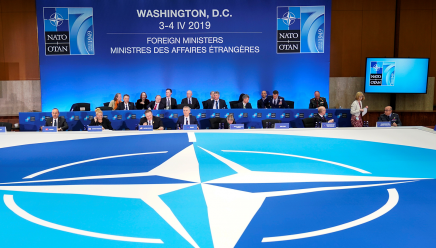