What Germany’s turning point means for its feminist foreign policy

Germany’s volte-face in response to Russia’s war against Ukraine has been hailed a Zeitenwende — a “historic turning point” that could see the country abandon the anti-militaristic position it has held since the end of World War II. The question then becomes, what will the country turn to instead?

Will Germany’s pivot mark a return of “realpolitik” or a new Cold War? Both of those would be a mistake. Instead, the way forward for the country can be found in the coalition treaty its government signed up to last year, when it committed itself to what it described as a “feminist foreign policy.”

Despite its name, feminist foreign policy is not primarily about the advancement of women; it’s about a fundamentally different international approach. In short, it puts the needs of all people first — and not just those of the loudest or most powerful. It’s about human rights and conflict prevention, economic development and social participation, just as much as it’s about health and the environment.

In addition to immediate support for Ukraine and pressure on the Kremlin to end this war, what Germany needs is a foreign policy oriented toward long-term goals, which is exactly what feminist foreign policy entails.

Such a policy approach mirrors the many elements of the concept of “human security,” coined by the United Nations, which focuses on the protection of the individual in his or her human dignity rather than the traditional protection of the state. The feminist approach, in turn, demands equal participation for all marginalized groups — whether due to ethnic origin, religion, sexual orientation, disability or age.

This may be a novelty in Germany, but it is not new to the world. The Swedish government has been a pioneer of feminist foreign policysince 2014, and Canada, France and Mexico have followed suit, at least in specific policy fields like “feminist diplomacy.” Other countries such as Denmark and Spain are pursuing gender-sensitive approaches in foreign policy as well, and the European Parliament also adopted a corresponding initiative at the end of 2020.

The war unfolding on Europe’s doorstep may lead some to ask what this feminist approach could do to counter the current Russian aggression. But such a question fails to capture the nature of the approach, which is a bit like a healthy lifestyle: A balanced diet, sufficient exercise and ample sleep are the basis for a long life. However, in the event of illness or accidents — or even intentional injuries — emergency care is also required.

In the current situation, Ukraine must defend itself; that’s why it’s up to Germany and all other countries to ensure that it is able do so. This support is mandated by the U.N. Charter as part of international law.

Such necessary action, however, must also take the consequences for the people themselves into account, whether in Ukraine, Russia or elsewhere. This means, for example, using economic sanctions in a targeted manner, and withdrawing them quickly and effectively in return for a corresponding political concession. Moreover, despite the exception currently made for Ukraine, Germany’s principled ban on arms exports to conflict regions should remain.

In addition, the diplomatic attempts made to avert war before the invasion must continue. If the war is not to end with the annihilation of one party, there will eventually have to be a compromise on questions of European security, even if it is painful in view of how the war started. The precepts of the détente policy of the 1980s — whether conventional arms control, limitation of nuclear weapons or confidence-building measures — are hot topics once again.

The war in Ukraine should not be the death knell for Germany’s feminist approach — far from it. The ground should be laid now, in particular by drafting Germany’s first ever national security strategy — a process just recently kicked off by Foreign Minister Annalena Baerbock — because once the guns finally do fall silent again, it’s time to focus on economic reconstruction, including rule of law reforms and the fight against corruption, as well as investments in education, environmental protection and an active civil society.

It is precisely because Ukrainians have distinguished themselves with their revolutions and overwhelmingly strong desire to belong to the European Union that their country, boasting a multilayered and vibrant society, deserves to be seen not just through a strategic lens but with a human-centered focus. That’s the turning point that Germany — and the rest of Europe — truly needs.

This text was first published by Politico on March 21, 2022. 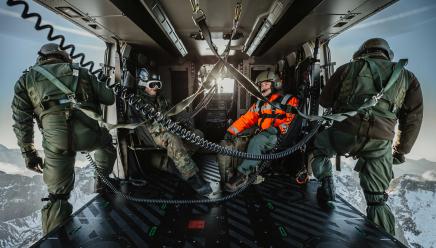