Ukraine has demonstrated that it has a new, long-range, precision-strike capability. This is likely to alter the military realities on the ground, particularly in the Kherson direction, creating more favorable conditions for Ukraine’s long-planned counter-offensive. Meanwhile, the weakening of Russia’s dominance of conventional escalation might create new strategic risks.

On August 9, several explosions shook the Saki military airport in the Russian-occupied Crimean Peninsula of Ukraine, located 225 kilometers from the frontline Initial video footage showed severe damage, which was confirmed by satellite imagery published on August 11.

Three days after the Ukrainian strike on the Saki airport, it appears quite likely that Ukraine used long-range, precision-strike weapons – a new capability for the Ukrainian forces. This means it was neither a special operation nor a sabotage, nor any sort of improvised drone attack.

Probably the strongest argument for the emergence of a new Ukrainian strike capability is that the Saki airport was not the only target similarly attacked on August 9. The Ukrainians also destroyed an ammunition depot at Novooleksiyivka and a command post in the village of Maksima Horkoho, both located in the Kherson region, 100 and 170 kilometers, respectively, from the front line. Unlike the attack on Novofedorivka, Ukraine claimed responsibility for these two strikes. (The likely reason Ukraine did not officially claim responsibility for Novofedorivka is that maintaining ambiguity has a de-escalatory effect, because it does not explicitly push Russia to retaliate.) In addition, one day later on August 10, another target was hit at Chongar, in the southern part of the Kherson region bordering Crimea. The location is approximately 110 kilometers from the front line.

Long-range missiles are generally not launched directly from the front line, but from well-behind at a safe distance. These three attacks indicate the use of a weapon with much longer range than Ukraine’s old, notoriously inaccurate Tochka-U missiles, which have a maximum range of approximately 120 kilometers.

Another factor strengthening this argument is that a few weeks earlier, on July 19, Ukrainians destroyed a Russian “Podlet K1” long-range, early warning radar system located in the southwestern part of the Kherson region. This radar is designed to detect high-speed aerial targets and alert air defense systems capable of intercepting them. In early August, Ukraine destroyed several Russian air defense systems in the Kherson region, including S-300 launchers and radars, using the U.S.-supplied AGM-88 HARM radar-seeking missile. These attacks revealed that Ukraine possesses the AGM-88, an important fact not made public before. In other words, before the attack on the Saki military airport at Novofedorivka, Ukrainians systematically blinded Russia’s air defense along the Crimea-Kherson border, destroying radars and air defense systems that could have detected and intercepted the missiles launched on August 9 and after.

The fact that Kyiv was willing to assume the political cost of revealing it had the AGM-88 HARM also supports the thesis that the Russian airport was attacked by missiles. Had Ukraine used a special operation, sabotage or something else, this would not have been necessary.

Ukraine’s operational plan functioned perfectly. The attack caught the Saki airport by absolute surprise. Airport personnel were conducting routine activities, and air raid sirens were not activated. Hence, they did not detect the incoming threat. An Ilyushin Il-76 heavy transporter aircraft was taxiing on the runway when the missiles hit. Following the attack, all remaining airworthy aircraft fled immediately and relocated to air bases further away from the front line.

All of this evidence (i.e., more long-range strikes in addition to Saki and the blinding of Russia’s air defense) speaks for the assumption that Ukraine used a new, long-range, precision-strike capability. U.S. officials clearly communicated that the strike was conducted not with a weapon system provided by the U.S. The available sources mention two possible weapons systems, both developed by Ukraine. One is the Grom-2/Hrim-2 short-range ballistic missile, which was still unfinished in 2021. It is possible that Ukraine has now completed its development. The other option is the Ukrainian-made Neptune anti-ship missile, which  also has a ground-attack option similar to the equivalent Russian systems, such as the Oniks and the Bastion. However, at present it is impossible to say whether Ukraine used either of these two systems or something else.

What really matters is not the exact type of the weapon but its strategic implications: Ukraine is now evidently able to deliver precision strikes against targets approximately 220 kilometers behind the front line. This is likely to have a serious, widespread effect on the activities of the Russian army in Ukraine, particularly in the Kherson operational direction.

The new Ukrainian capability is likely to seriously hamper the activities of the Russian air force, particularly towards Kherson, and will also further constrain Russian logistical capabilities there. As Russia cannot be sure how many such missiles Ukraine has, Moscow needs to withdraw its most valuable capabilities, particularly aircraft and helicopters, to air bases further away from the front line, in order to remove them from the suspected range of Ukraine’s new weapon. The need to operate from more distant air bases will limit Russia’s operational capabilities particularly on the Kherson front. While on the Donbas front, Russia can rely on plenty of airports in the neighboring Russian regions, this is not the case for Kherson.

The Russian military will also likely need to continue adapting its logistics to the new threat, which it has been doing since the appearance of the HIMARS multiple-launch rocket systems in the battlefield. More precisely, they will now need to unload their trains at stations further away from the front line in order to protect them from Ukrainian precision strikes. And supplies will have to be trucked much further distances to the front line than before. This requires more trucks, more drivers, and more fuel, while the transit capacity of the roads remains the same. As a result, Russian logistics will become slower and more cumbersome, again particularly towards Kherson.

Both factors will help Ukraine’s long-planned counter-offensive that is likely to take place in the Kherson region. Russian troops will have weaker air support and less efficient logistics in this section of the front line.

Third, the attack on the Saki airbase demonstrated – as aptly pointed out by Mark Galeotti in The Spectator – that Russia now does not exclusively dominate the possibility to escalate. From now on, Ukraine will also be both willing and able to escalate if Kyiv deems it necessary. It is currently too early to assess whether Russia will find an antidote to the new Ukrainian missile, or whether this weapon will be as tough a nemesis for Russian troops as the HIMARS.

The real effects of the new Ukrainian strike capability depend fundamentally on  how many of these new weapons Ukraine possesses –  a number that cannot be ascertained from open sources. Of course, even a few demonstrative strikes have a deterrent effect. However, it is not yet known whether Ukraine has enough missiles to begin systematically impairing Russia’s major ammunition depots, traffic junction points and military infrastructure in the occupied territories. In other words, whether Ukraine will be able to inflict strategic-scale damage on Russia’s military is still an open question. The answer will probably become clear in the upcoming weeks.

Nevertheless, the emergence of the new threat will likely force Moscow to re-alculate both its operational and strategic assumptions. Unfortunately, since its dominant position to escalate through conventional means is now contested, Russia will likely rely more on other forms of threat to escalate. This will possibly include massive, conventional retaliatory strikes against Ukraine’s civilian infrastructure and population. And it may well increasingly bring up the nuclear dimension too, whether as a threat to use nuclear weapons or by escalating military activities around the occupied Zaporizhzhia nuclear power plant.

All in all, by efficiently demonstrating the existence of its new, long-range, precision-strike capability, Ukraine gained considerable political, operational and tactical benefits, while possibly raising the stakes on the strategic level. However, the fact that Ukraine consciously refrained from claiming responsibility for the attack on Crimea, and thus avoided politically cornering Moscow, demonstrates that Kyiv is well aware of the risk and is willing to mitigate it.

András Rácz is Associate Fellow at the German Council on Foreign Relations. He is not identical with the Andras Racz working at the Hungarian pro-governmental daily Magyar Nemzet.

Background research for the present study has been conducted with the support of research grant No. 129243., entitled ‘Tradition and Flexibility in Russia’s Security and Defence Policy’, provided by the National Research, Development and Innovation Office of Hungary.

This DGAP online commentary was published on August 12, 2022. 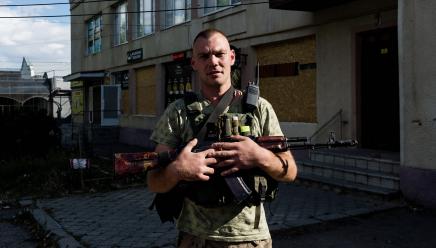