Ursula von der Leyen’s first ‘State of the Union’ speech is an opportunity for her to reassert her political agenda under the conditions of COVID-19 and to set the tone for her four remaining years in office. The summit agreement in July on a recovery strategy was perceived as a leap forward for the EU but fell short of von der Leyen’s ambitions. Fault lines between member states are deepening, and interinstitutional cooperation is on the wane. This is a make-or-break moment for the Commission President.

In November 2019, at the start of her term, Ursula von der Leyen set out aims which she believed would define her time as President of the European Commission. Now, less than twelve months after those unusually close-run hearings in the European Parliament, she is fighting to rescue her agenda. This week could prove make or break: On September 16, von der Leyen will return to the Parliament to deliver her first ‘State of the Union’ speech. This will be an opportunity for her to relaunch her political program, emphasize the importance of her flagship project ‘The European Green Deal,’ and set the tone for the rest of her five-year mandate.

In March, von der Leyen was forced to shift all her resources into coordinating a European response to the unfolding health crisis and a sudden recession which brought the deepest output contraction since World War II. In July came the European Council summit, one of the longest and most fractious in history. This produced the landmark agreement to expend significant resources for Europe’s post-COVID recovery and give the Commission unprecedented powers to raise money on international markets. But the deal-making between leaders also sucked political capital away from von der Leyen’s own agenda, leaving the fault lines between member states as deep as ever and cooperation between the institutions in Brussels at a low.

Von der Leyen therefore needs to shift gear and move back onto the offensive if she is to shape the future of the EU. In her speech, she will almost certainly return to her three key priorities:

‘The European Green Deal’, an ambitious plan for the EU to decouple growth from resource use and to become climate neutral by 2050, will be a central element of her speech. It is at the heart of a modernization agenda which also requires the member states to carry out difficult reforms over the remaining four years of the current Commission’s term. The trouble is that with the Multiannual Financial Framework (the EU’s long-term budget for the years 2021 to 2027, MFF in short) and the Next Generation EU instrument for boosting member states’ economies, EU leaders effectively set different priorities for EU spending right up to 2027.

The July deal on the MFF and the Next Generation EU recovery instrument has been widely perceived as key to restarting the EU’s economy after the first wave of COVID-19. In contrast to the European sovereign debt crisis, the EU reacted swiftly and agreed a comprehensive set of protections against the economic shock. Von der Leyen earned some credit, proposing the basis for the compromise between the conflicting camps in the European Council.

There is little doubt about the symbolical meaning of the agreement: For the first time, the EU can issue common debt on behalf of the member states. Leaders asked the Commission to borrow up to EUR750 billion on the financial markets as part of Next Generation EU – a step that would have been unthinkable even a few months ago. In addition, the deal set events in motion toward a real increase in the EU’s ‘own resources,’ the technical term for the EU’s power to raise money for its budget. This, and the fact that the Commission will play a central role in overseeing national recovery plans, will surely strengthen its powers in the long run.

And yet, the summit deal steamrollered the Commission President’s own economic modernization agenda, treating her priorities as little more than a way to buy off recalcitrant member states. Leaders scaled down the draft MFF that von der Leyen proposed in May and chose to stick with the previous MFF’s antiquated structure. The gap of income resulting from the UK’s exit will not be filled completely – and this at a time when most voters expect the EU to do more.

The Challenge for the “Green Deal”

Worse still: In search of a compromise, EU leaders also decided on cuts to several climate-friendly instruments while leaving traditional spending blocks such as cohesion policy and agriculture untouched. The novel Just Transition Fund aiming to support regions, businesses, and workers in the adjustment process toward climate neutrality was slashed by more than half to EUR 17.5 billion. Money was also shaved off InvestEU and Horizon Europe, two programs earmarked for sustainable investments. And the proposed Solvency Support Instrument, intended to provide urgent equity support to otherwise sound businesses put at risk by Covid-19, was completely abandoned, along with a new EU health program.

Still, some options do remain for the Commission President when it comes to re-establishing the primacy of climate goals. When trying to rebuild support for her flagship “European Green Deal”, von der Leyen can exploit the fact that most member states have welcomed (or at least not opposed) linking the economic recovery with Europe’s impending green and digital transition. Indeed, this time, EU climate goals are tightly integrated into the EU’s MFF. Member states have earmarked 30 percent of the entire package for climate objectives. It is now up to von der Leyen to ensure that those 30 percent are not diluted – and, of course, that the remaining 70 percent really do not damage the environment.

But will that be enough to reach her ambitious targets? At her State of the Union speech, von der Leyen will likely confirm her intention to raise the benchmark for cutting emissions, obliging the EU to achieve by 2030 a 55 percent reduction from 1990 levels. With the Green Deal, she has, after all, pledged to make the EU completely climate neutral by 2050, so the current target of a 40 percent reduction by 2030 seems too modest. Accelerating the transition will require significant investment, much more than that foreseen under the MFF. But member states may well cool on von der Leyen’s green agenda in the months to come as the focus of national governments shifts to fostering a quick economic rebound, especially in traditional industries.

Partnering with the Parliament

The MFF is still just a draft agreement and requires the consent of the European Parliament (EP). While the biggest step towards a final agreement was made at July’s European Council summit, detailed and difficult negotiations between the EP, the Commission, and the Council will have to be finalized by October. In its Resolution of 23 July, the EP did not actually accept the political agreement as it stands. It has criticized the lack of an effective mechanism to safeguard the rule of law as well as the failure to agree on a binding commitment to new “own resources” which would cover some of the costs of the recovery fund. MEPs are also concerned that cuts to future-oriented programs such as Horizon Europe, InvestEU, and the Just Transition Fund will undermine the economic recovery.

Although von der Leyen did hail the agreement between the member states on the MFF as an “enormous achievement” in a speech before the EP shortly after the summit, she sympathized with much of the criticism. Thus, she will be receptive to calls to use the dialogue between the Council and the EP to push for concessions. Here, she should be able to capitalize on her good working relations with the German EU Council Presidency. For the time being, however, the EP has stepped up its rhetoric, threatening to veto the agreement if its demands are not met.

This is high stakes poker. Should the MFF deal, which took EU leaders five days to agree, be reopened or even delayed, von der Leyen may find both her own agenda and the MFF in tatters. In addition, the EP risks to be blamed by citizens and member states alike for blocking urgently needed financial aid to member states strongly affected by the pandemic. This limits the scope for the EP to credibly play hardball in the interinstitutional negotiations and leaves von der Leyen with little hope of seeing the existing agreement amended along her personal lines.

Von der Leyen’s State of the Union speech will take place under the extraordinary circumstances of the COVID-19 pandemic. Despite difficult negotiations, an agreement on the MFF is in sight. To a large extent, this will define the financial room for maneuver of the remaining four years of her term. Thus, her scope to push her future-oriented priorities, particularly on the green transition, remains limited. The MFF remains beholden to old structures and riven by fault lines between member states and between institutions. To achieve compromise between member states and the EP, von der Leyen will have to invest even more of her scarce political capital.

And yet, a well-formulated speech will see her reach out to new allies. She should capitalize on her good working relationship with German Chancellor Angela Merkel and French President Emmanuel Macron by encouraging joint initiatives. She should also strengthen her relationship with the European Parliament. In addition, the Conference on the Future of Europe, whose set-up is currently debated being in interinstitutional negotiations between the Council, the Commission, and the Parliament, could be an important vehicle for her to keep the reform debate alive. 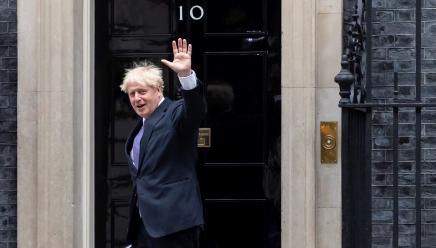