2022 was a tough year for the global economy and economic governance. Just when the global economy was starting to recover from the Covid pandemic, Russia invaded Ukraine and geopolitical frictions intensified. The world is now facing a triple crisis as a result: an energy price crisis, a food crisis, and a financial crisis. This comes on top of the health and climate crises. There are major uncertainties surrounding policy. Those who hope that the worst is soon behind us and that 2023 will be an easier year will likely be disappointed as governments struggle to buffer adjustment pains with shrinking fiscal space.

To counter inflationary pressures, central banks around the world have tightened their monetary policies. The risk of stagflation – sluggish growth with high inflation – remains high. The 2020s could easily become a lost decade for economic and social development.

According to the IMF’s World Economic Outlook for October 2022, real global GDP is expected to grow by 2.7% in 2023, noticeably slower than in 2021 (6%). The growth rate of advanced economies is forecast to be only 1.1% in 2023. Emerging and developing countries (EMDE), on the other hand, are likely to grow by 3.7% in both 2022 and 2023. Europe and Central Asia will be hit the hardest by the consequences of Russia’s war against Ukraine. 31 of 72 economies considered (representing more than one-third of world GDP) face at least two consecutive quarters of negative growth at some point in 2022 and 2023. The WTO expects growth in world trade to slow further from 3.4% in 2022 to only 1% in 2023. While logistics are expected to run somewhat smoother, geopolitical and geo-economic uncertainty in supply chains remains high. Production and supply networks are changing as governments and companies around the world place a greater emphasis on resilience. One dampening factor for trade is likely to be the US dollar, which is expected to remain strong in 2023. As roughly 40% of international trade transactions in goods are invoiced in US dollars, this will make exports from many countries more expensive. This further exacerbates the problem of rising debt for many developing countries.

The poorest countries and the most vulnerable people will be hit the hardest. Over several decades, poverty and income inequality had decreased. Since the beginning of the pandemic, however, they are on the rise again. According to an UNDP analysis of 111 countries, 1.2 billion people lived in acute multidimensional poverty in 2022. This trend will increase even further due to the economic slowdown predicted for 2023.

Food insecurity is also on the rise. Between 702 and 828 million people are living in severe food insecurity. This number has risen by about 150 million since the beginning of the Covid-19 pandemic. The FAO warns that acute food insecurity continues to escalate globally. This does not bode well for 2023.

The good news is that energy price hikes are expected to level out; the World Bank even projects a decline of 11% in 2023. The bad news is that energy prices will still be 75% above their average for the past five years. The same holds true for inflation. According to the IMF, global inflation is predicted to be 6.5% in 2023. An Ipsos survey in partnership with the World Economic Forum finds that 79% of workers expect their real income to fall in 2023 and the number of people fearing that unemployment will grow in their country over the next 12 months (61%) is rising. This is likely to lead to greater social instability in many countries.

Trade can be a powerful tool for economic growth and development, and can help absorb shocks too. However, international trade governance has become more difficult. Geopolitical and geoeconomic friction has been on the rise for some years, with China at the centre of the phenomenon. Russia’s invasion of Ukraine on 24 February 2022 marked a watershed in international relations and in the world economy. Great power competition and systemic rivalry are on the rise. Trade frictions could easily escalate in 2023 as a consequence.

While 2022 marked the successful conclusion of the WTO Ministerial Conference (MC12), widely hailed as a breakthrough for global trade governance, 2023 will be a year in which differences will come to light. One of the highlights of MC12 was the agreement to authorise the use of patented vaccines (TRIPS waiver). However, as part of the package, WTO members had agreed to discuss the extension of the waiver for therapeutics and diagnostics until the end of 2022. The United States has now decided to launch an investigation first and therefore asked for a new deadline way into 2023. This will have a negative effect on global trade cooperation at WTO level, further dampening progress on issues like the e-commerce moratorium, which needs to be extended in 2023. 2023 is also the year in which progress must be achieved on reform of the WTO’s Appellate Body. So far, only limited headway has been made. Hopefully, 2023 will see greater engagement by the United States on this matter. All in all, only limited progress in global trade governance can be expected in 2023.

The outlook for transatlantic relationships is not great either. After a preliminary solution to the steel and Airbus/Boeing subsidies conflict in the early stages of the Biden administration, transatlantic relations have again become burdened by the ongoing conflict surrounding the US Inflation Reduction Act (IRA). The transatlantic partners were unable to solve the problem at the Trade and Tech Council (TTC) in December. If there is no solution on the Buy America provisions for electronic vehicles, the EU and the United States will likely enter a subsidies race for green technology in 2023, to the detriment of all.

This conflict happens against the backdrop of ongoing US-China rivalry. The US National Security Strategy from October 2022 states: “The People’s Republic of China harbors the intention and, increasingly, the capacity to reshape the international order in favor of one that tilts the global playing field to its benefit”. This view on China will lead to increased decoupling by the United States of strategic supply chains (high tech and security products as well as critical metals and minerals), more stringent export controls, and inward as well as outbound investment screening. In 2023, the United States is likely to ask the EU to share more of the burden and to follow the same adopted path.

Asia Pacific will be the only region where some silver lining may be seen for global trade cooperation in 2023, even though US-China rivalry casts its shadow on this region too. The Comprehensive and Progressive Agreement on Trans-Pacific Partnership (CPTPP), with a focus on 21st century trade issues such as e-commerce, investment, and intellectual property, will likely be expanded in 2023. The United Kingdom officially applied to become a member in 2021. South Korea, China, and Taiwan followed. Indonesia, the Philippines, and Thailand have also expressed interest in joining. If the UK proceeds, it could become a member in 2023. While the other applications will be much more difficult, they nevertheless provide a glimmer of hope that many nations still see the benefit of open trade and cooperation.

2023 looks gloomy for the global economy and global trade governance. After the hope engendered by gradual recovery from the pandemic, the Russian war in Ukraine has provided another shock to the world economy, highlighting the geopolitical risk of dependence on an autocracy with aggressive ambitions. Geopolitical rivalries will intensify in 2023, darkening the economic outlook even further. The transatlantic relationship remains crucial, but as the IRA shows, cooperation remains far from automatic. The hope is that both partners can avoid a subsidy war in 2023 and that there will be some progress at WTO level.

This article was published by the Italian Institute for International Political Studies as a part of the Dossier The World in 2023 Dossier on December 24, 2022.

Dr. Claudia Schmucker
Head of the Center for Geopolitics, Geoeconomics, and Technology 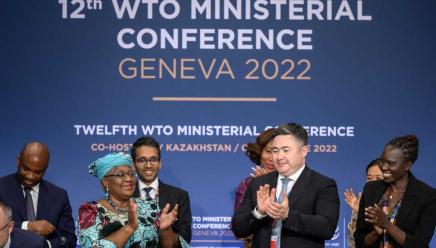