The Kremlin’s New Levers of Control over Elections and Society

Russia’s most recent parliamentary elections have been long in preparation, arguably since the protest winter of 2011–2012. Dismayed at the apparent electoral fraud on display in the December 2011 elections, voters took to the streets, catching the authorities by surprise. For the Kremlin, it became clear then that in order to achieve calculated election outcomes, it is not enough to have control over the ballots and manipulate voting results: it is essential to possess the power to manage information flows.

Lessons from 2011
A decade ago, Russian citizens discovered the power of the internet and social media to expose wrongdoing, share news, and mobilize protestors. For the first time in Russia, popular discontent spilled from social media accounts into the streets. The biggest series of protests in Russia since the 1990s gathered thousands of people in numerous Russian cities and continued into 2012 and 2013. The Kremlin took the public outcry as a serious threat and acted brutally and effectively. It dispersed rallies, prosecuted and jailed opposition leaders and activists, and banned television stations from covering the protests. But it could not find an effective penalty for the social media companies that had allowed people to connect with each other and spread information in real time. Nor could it simply shut down the internet entirely. The Kremlin then realized what a danger the internet and mass connectivity brought for the regime.

Ten years later, the page has turned. Unlike the 2011 parliamentary elections, this time the internet and information technology have been massively hindered to enable the Russian people to keep one another informed or organize protests. Instead, it has been used by the government of Russia to control society. In advance of the 2021 Duma election, Russian authorities have taken action to use information technology to prevent dissemination of undesirable information.

The RuNet’s New Era
In the recent years, Russia’s legislators and authorities have gone to great lengths to subjugate the internet and disenfranchise what had been seen as “liberation technologies”—that is, communication technologies that facilitate independent collective action. Russia’s legislators have come up with a vast number of restrictive laws and regulations, banned websites, and tried blockages and shutdowns. When they failed, they tried again, until they developed and finetuned a kit of robust censorship tools.

One of the regime’s most formidable tools is hidden behind the long bureaucratic name “technical equipment for counteracting threats to stability, security, and the functional integrity of the internet on the territory of the Russian Federation”—or TSPU, for short. Officially announced as means of protecting the RuNet (Russian internet) from external threats, in reality TSPU is a powerful technology intended for the targeted restriction of free speech.

Russia’s preeminent censor agency, Roskomnadzor, has sought to overcome its fundamental problem: how to isolate and block targeted websites and limit undesirable information flows without paralyzing the entire network. As a state watchdog, it has long aspired to become the country’s central point for control over communication networks and facilities, as well as personal data. Initially, it was not a part of the governance of the internet in Russia—which, since the early 1990s, has become an integral part of the global internet. Roskomnadzor’s growing ambitions clashed with the internet’s complex infrastructure, with its countless nodes and connections to foreign countries as well as its dependence on the international tech companies and their services. Between 2018 and 2020, the whole world could see how powerless Roskomnadzor was when it unsuccessfully tried to block the encrypted messenger app Telegram, causing outages and problems for countless other services.

However, today’s Roskomnadzor is the core of internet governance on Russian territory. Russia’s notorious “sovereign internet law” of 2019 gave Roskomnadzor authority over the infrastructure of online communication networks within Russia and paved the way for a new era of the RuNet. The law equipped the censor with TSPU, which uses Deep Packet Inspection (DPI) technology to monitor, filter, and slow down internet traffic and user requests, as well as to block specific content. By installing DPI technology on the networks of Russia’s internet service providers, Roskomnadzor can independently limit the speed of access to certain websites and block information without crashing the entire RuNet. With this level of control over internet infrastructure, the state has been able to centralize the management of information flows in Russia.

Roskomnadzor Wins
The Russian main censor’s immediate battle royale has been with a practice called “Smart Voting.” It is opposition leader Alexei Navalny’s term for tactical voting. Navalny’s team has compiled a list of candidates that its members see as best placed to defeat their competitors from the ruling United Russia party. The biggest threat of Navalny’s strategy is that Smart Voting can translate online engagement into electoral victories. The scheme has achieved success before, however modest. During the 2019 Moscow city election, it helped reduce United Russia’s majority in the City Duma. It also helped a few Navalny allies win seats in city councils during the 2020 regional elections.

This strategy remains controversial, but it is probably the last effective tool in the opposition’s hands, and it relies on the internet. Smart Voting is able to short-circuit a political system that excludes any candidates from running for office except Putin allies. It is different from all other election practices in that it cannot be controlled by the Kremlin. Even with Navalny in jail, his foundation labeled as extremist and practically destroyed, and his team in exile, the Russian authorities still cannot be entirely sure that elections will turn out as desired as long as there is uncontrolled flow of information.

Roskomnadzor’s approach to fighting Smart Voting reveals the regime’s serious vulnerabilities in the face of the free dissemination of information. It blocked practically every platform where Navalny’s team placed their lists. It blocked both the Smart Voting website in Russia and Navalny’s own website (navalny.com), along with nearly 50 sites linked to him. Roskomnadzor showed the strength of its new TSPU tool by blocking even Navalny’s mirror website without disrupting Google services in Russia. To prepare for the upcoming Duma election, the censor tested this technology in March 2021 by slowing down Twitter in Russia, and the results were good enough to be workable. Even if there was some collateral damage—the official websites of the government, the Kremlin, and the Duma, as well as the websites of the banks VTB and Alfa Bank, were not accessible when Roskomnadzor slowed down Twitter—it became clear that the authorities had the power to take over the internet whenever they chose to do so.

Roskomnadzor’s quest to gain total control over information continues to this day. It is aware that there are ways to bypass blockages and still get access to “prohibited information”—for example, by using virtual private networks (VPNs) or DNS over HTTPS (DoH) protocols. In response, it started to block several VPNs. In parallel, Russia’s state-backed major telecom provider Rostelecom proposed to prohibit access to the public DNS servers of Google and Cloudflare. It also suggested that it will restrict access to DoH protocols, which encrypt web traffic so that the operators cannot see which resource the user has requested and cannot ban access. Instead, Rostelecom is pushing for the use of national DNS servers or IP addresses of the National Domain Name System, in order to enable access to all user requests and ensure that users cannot bypass blockages. If internet users still manage to find ways to get around Roskomnadzor’s bans, the Kremlin could take still more repressive measures to shut down mobile internet in Russia as a whole or in specific regions. Such tactics already have been tested during protests in Moscow and Ingushetia.

At present, Roskomnadzor is not omnipotent when international big tech companies are involved. Its technical means have their limits. In those cases, Russian authorities have opted to apply pressure and threaten companies with fines and prosecution. In a recent example of this heavy-handed approach, Google and Apple had to remove the Navalny app from their stores in Russia. Google has also blocked access to the Google Docs and YouTube videos posted by Alexei Navalny’s team with its “Smart Voting” list of candidates. TheTelegram messaging app has joined the Kremlin’s digital censorship campaign and blocked the “Smart Voting” bot. With the invigorated Roskomnadzor on the one side and the pliable global tech giants on the other, the internet has been practically subjugated by Russia’s authorities.

Russian Citizens Lose
Given this aggressive policy against free information, the RuNet’s future is dim. For sure, such interference will not make the internet faster or more robust. Rather, it will damage the infrastructure that was built to connect people and support Russia’s economy.

Yet it seems as though Roskomnadzor and other authorities really only care about having total control over information and are preoccupied with developing the technical means to achieve this goal. With that goal in mind, according to early results they have achieved their planned election outcomes and will be able put the right people into deputy seats. People will be promoted for implementing the lessons learnt from 2011. However, this will also decouple elections from politics and public debate in Russia, and further widen the gap between the state and society.

This text was first published on September 20, 2021 by Kennan Institute. 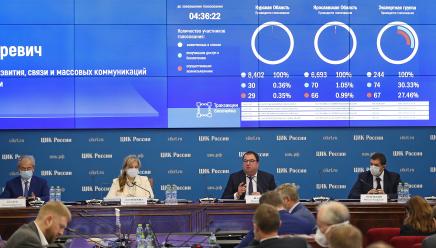