Scholz Must Send a Clear Message on His Visit to Beijing

Germany’s chancellor is right to open channels with China but it is vital he makes his security and economic priorities clear.

When German chancellor Olaf Scholz arrives in Beijing this week, he will be the first G7 leader to visit China since the start of the pandemic. This trip has sparked controversy both at home and in the rest of Europe.

The critics argue that it is time to break with Angela Merkel’s example: instead of deepening economic ties with authoritarian regimes, Germany and the EU should decouple from them. This, they say, is one lesson from Berlin’s dependence on Russian gas, which has now become a costly liability. Instead of decoupling, Scholz is allowing the Chinese shipping company Cosco to take a minority share in parts of Hamburg’s container port, despite opposition from his own government. Members of the Green party — a junior coalition partner that opposes the deal — argue privately that the chancellor has only agreed to this potentially risky sale of critical infrastructure as a gift to his host Xi Jinping.

Those in favour of the trip argue that re-establishing personal contact with Xi is crucial after years of pandemic isolation. According to this rationale, Vladimir Putin’s isolation during the Covid outbreak encouraged his “radicalisation” on Ukraine. Moreover, the Chinese market is simply too big to ignore. Many large German companies are deeply invested in China and generate large shares of their profits there. Those defending the trip have bet on China for their growth, even if they are potentially overestimating the country’s overall growth potential.

There is no question that the trip comes at a difficult moment. While Scholz’s messaging has been ambiguous, Germany needs to be clear-eyed on its strategic priorities at a moment of geopolitical confrontation. If the chancellor finds the right way to explain his actions, he can still make the Beijing visit a success.

First, he needs to take a firm line on the importance of sanctions against Russia. Any weapons assistance or material support to Russia undermines the European security order — which is more important than economic benefits from trade. Beijing’s support for Moscow’s war against Ukraine has so far been muted. Chinese technology companies have reduced their activities in Russia, ensuring that sanctions continue to weaken the Kremlin’s military activity. China’s financial sector has steered clear of Russia. And since Beijing has declined to supply weapons, Moscow has had to buy them from Iran and North Korea. When he meets Xi, Scholz must be clear that any change of position would lead to an escalation of geopolitical tensions. Germany will have to set out the likely consequences — even if these bring economic costs.

Second, while German companies, workers and consumers depend on trade with China, massive state subsidies from Beijing distort the level playing field. China is increasingly making technology transfer a condition for market access and is using trade as a means of political coercion, as it did recently against Lithuania. Scholz should make clear that Germany will spearhead a tough, united EU position on these matters. Trade and investment treaty negotiations are an exclusive EU competence. He should say that Germany will continue to support the development of tools such as the EU mechanism against economic coercion and its vetting system for Russian and Belarusian investments. In the single market, economic coercion against one EU country will be regarded as economic coercion against the entire bloc.

The third message should be targeted at those travelling with Scholz to Beijing. German companies can continue trading with China, but critical dependencies must be reduced. This may, in the event of geopolitical confrontation, mean sacrificing profits. That does not mean ending business relations and losing those profits now. Those arguing for general economic decoupling seem to forget the impact this would have on workers and consumers. Instead, companies need to put in place contingency plans to ensure continuity of operations in case China weaponises its trade ties. The EU has high dependencies for 6 per cent of its imports, including in energy and green industries ecosystems, health, and digital including among others semiconductors. These must be addressed

Maintaining open channels with China is important, and the German chancellor can be congratulated on being the first western leader to re-establish contact. But only with clear signals on the need to prioritise western security, its economic interests and European unity can this visit be a genuine success.

This OpEd was first published in the Financial Times on October 30, 2022. 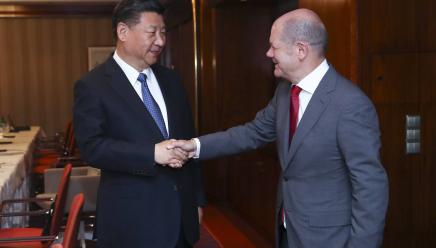