Although Emmanuel Macron’s recent media interview succeeded in starting a substantive conversation within Europe about what European sovereignty actually means, it comes with a cost. Its ambivalence could result in France and Germany retreating into separate political corners, leaving little momentum for achieving the strategic autonomy that the EU really needs.

With the election of Joe Biden, a semblance of normalcy has returned to the US presidency. Paradoxically, this has also led to the perception in Paris that Biden’s election could damage French President Emmanuel Macron’s standing as an international and European leader while the rest of Europe quickly slips into the comfort of a naïve return to the status quo ante. This was probably the chief concern that prompted Macron to give a long interview in Le Grand Continent that was translated into five languages.

Macron’s interview succeeded in starting a substantive European conversation about what strategic autonomy or European sovereignty really means – in part, by picking on German Defense Minister Annegret Kramp-Karrenbauer and trying to create a wedge on these issues within the Christian Democratic Union (CDU), the party to which she and Chancellor Angelika Merkel belong. The debate can be followed in recent articles such as “Less Talk, More Action” by security and defense experts Claudia Major and Christian Mölling and, in German, “Wir müssen handlungsfähig werden” (We must become capable of action) by Franziska Brantner, a member of the German Bundestag.

Two things about Macron’s interview especially struck the non-French public. The first and foremost is his apparent dismissal of the 2020 US presidential election, which he hardly mentions and clearly does not consider to be a new chance for multilateralism and transatlantic cooperation. Indeed, Macron seems to want to drive home the idea that, regardless of who sits in the Oval Office, the European Union has and will continue to have increasingly divergent interests from the United States. He argues that Europe’s socioeconomic models, neighborhoods, and resources create different geopolitical challenges and obligations. The second is the absence of Russia from the French president’s current geostrategic vision and thinking. One year after Macron’s pivot toward Moscow unnerved most of Europe, the fact that Russia no longer plays a role tends to confirm the impulsive if not erratic turns in France’s foreign policy.

Macron’s most important message, however, remains a plea for European unity and international cooperation. Such coordination, Macron argues, could overcome the failings of the established Washington Consensus, a term used to describe a set of standard neoliberal economic policy prescriptions promoted by the Bretton Woods institutions but that also reflects the traditional global leadership of the United States. Such coordination could, in fact, create a new framework that he dubbed – in a rather jingoist reflex – the Paris Consensus. In it, Macron seems to see both an international rallying cry and an electoral platform that straddles European and domestic politics in view of France’s next presidential election in 2022.

Rather than being a robust intellectual framework, Macron’s proposals seem to be more of a political smokescreen. By aiming to unite those from across the political spectrum behind it – from French socialists and German Greens all the way to European nationalists and anti-immigration zealots – the Paris Consensus has an ambivalence that is also its fundamental weakness. An effective global agenda for change cannot possibly suddenly unite the cosmopolitan liberals Macron cherishes with the nationalists he once aimed to defeat.

Indeed, this strategy has a cost. The bold calls for European integration, sovereignty, and democracy that Macron made early in his tenure have now been replaced by a more guarded attitude. A skepticism, reinforced by a newfound passion for the nation state and national democracy, has crept into Macron’s outlook that was initially European and rather federalist. Indeed, there is no more talk of an institutional revolution, new European treaties, or a new conference on the future of Europe to overhaul its democratic shortcomings. This loss of European ambition is potentially an important shift. It might be perceived as a return to the traditional Gaullist/French position on Europe, which could, in turn, encourage further German conservatism.

The danger of France’s view on European sovereignty is that it is neither backed by a shared perspective on geostrategic goals, nor soothed by a shared governance to ensure democratic controls on the use of force. This highlights a rather fundamental tension between France and Germany that stems from their political philosophies. For Germany, sovereignty is rooted in its democratic foundation and the checks and balances first enshrined in Montesquieu’s theory of the separation of powers. For France, sovereignty is rather based in Thomas Hobbes, particularly the ability to project the full force of the state (Staatsgewalt).

The perception that France thinks of European sovereignty primarily as an instrument to project its own power through Europe does not encourage engagement. It rather pushes German leadership to wait calmly for a new US administration in January 2021 and campaign for a smooth post-Merkel transition that year. Meanwhile, in France, Macron is betting the house on a political wager that seems more challenging than the one he pulled off when he founded his own political movement and was elected in 2017. Given their contrasting positions, there is a real risk that a meeting of the minds on European sovereignty and democracy will have to wait. 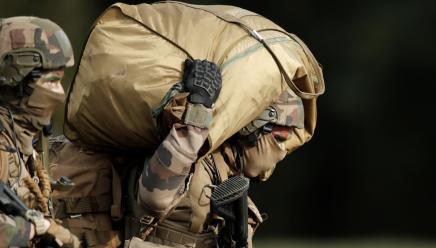 Europe has to move beyond toxic debates about “autonomy” or “sovereignty” toward tangible policies.