Orbán or Not Orbán

Hungary Faces a Binary Choice in Its Parliamentary Elections

On October 17, the usually fragmented Hungarian opposition elected a joint candidate for prime minister – the first step in its bid to defeat Fidesz, the ruling party of Viktor Orbán. By uniting behind Péter Márki-Zay, as well as other joint candidates for the April 2022 parliamentary elections, the opposition parties are turning the vote into a binary choice. The election could go either way, but one thing is certain: the EU will have to deal with the result of a much tougher and more polarized electoral race than ever before.

During his 11-year rule of Hungary, Viktor Orbán has used the fragmentation of his parliamentary opponents to cement his semi-autocratic system. Out of the six opposition parties, which are divided along entrenched ideological, historical, and other lines, the strongest is the social-liberal Democratic Coalition led by Ferenc Gyurcsány, an unpopular former prime minister who served from 2004 to 2009. In the last two elections, in 2014 and 2018, this fragmentation led to two constitutional majorities for Orbán. Now, a paradox: the future of the strongest illiberal, semi-autocratic system within the European Union will be defined by parliamentary elections.

Recent modifications of Hungary’s electoral regulations have practically forced its opposition parties to unite. Orbán’s strategy behind adopting these modifications was to put the spotlight on Gyurcsány who admitted in a leaked 2006 speech that he had won that year’s elections by lying to the public, resulting in serious riots and making him the most hated politician in the country. Therefore, Fidesz has centered its current campaign on Gyurcsány, assuming that his bad reputation will eclipse Fidesz’s decreasing popularity considering Hungary’s economic hardship and massive corruption scandals.

To achieve a degree of unity, opposition parties held two rounds of primary elections in September and October 2021 to agree on a prime ministerial candidate and joint candidates in the country’s 106 individual electoral constituencies. These primaries mobilized a surprisingly high number of voters: altogether, approximately 800,000 Hungarians participated in at least one of the two rounds. Although there were a series of – yet unattributed – hacking attacks directed against the IT systems of both these elections and independent media outlets, they did not block the primary election process.

The first round of primaries resulted in an ideal outcome for Fidesz: a massive win by Klára Dobrev, the wife of Gyurcsány, who was nominated by the Democratic Coalition. In the second round, however, Dobrev was defeated by Péter Márki-Zay, a relative newcomer to national politics who does not even have a party behind him. Márki-Zay first garnered wider attention in 2018 when he won the mayoral seat of Hódmezővásárhely, a former Fidesz stronghold, by campaigning on an anti-corruption platform. As a vocal conservative, former member of Fidesz, practicing Catholic, and father of seven, he is also attractive for disillusioned voters of the ruling party.

Given his background, Márki-Zay fits into the pattern of anti-establishment figures entering into high politics in Central and Eastern Europe, examples of whom include Volodymyr Zelenskyi in Ukraine, Zuzana Čaputová in Slovakia, and Szymon Hołownia in Poland. Moreover, his past experience in marketing has proven to be helpful in his political communication, giving a respectable sheen to his oft populistic rhetoric. His years of working in Canada and the United States provide him with the image of a successful businessman who returned home.

There is still no sign that Fidesz has fundamentally changed its approach to the election. Indeed, it will probably stick to its Gyurcsány-centered agenda and attempt to smear Márki-Zay based on his cooperation with the former prime minister’s party. Meanwhile, united by an anti-Orbán agenda, the six-party cooperation is likely to maintain its course until April 2022. Thus, the upcoming election has turned into a binary choice: Orbán or not Orbán. Yet the united opposition will face its biggest challenge in the coming months when its parties will need to select and rank 93 names for the joint party list. Each of Hungary’s 106 electoral districts will be a mini referendum against Fidesz.

Implications for Hungary and the EU

Although most polls show more or less equal support for the ruling party and joint opposition, Orbán holds many trump cards. Since 2010, the system of checks and balances in Hungarian politics has largely been removed or distorted. Nominally independent positions have been filled with Orbán loyalists, many of them cemented into their positions as long as there is no new constitutional majority to replace them. Businessmen affiliated with the ruling party control the majority of Hungary’s electronic and printed media outlets. Fidesz has also started to outsource several state functions to newly set up organizations that are de jure independent from any government but de facto loyal to Orbán.

Still, even according to pro-Fidesz pollsters, it seems highly unlikely that Orbán can win a convincing constitutional majority. Therefore, the chances for post-election instability in Hungary are high. Should Orbán win only with a narrow majority, the united opposition would probably stage major protests and question the legitimacy of the results, pointing out the highly distorted regulatory and media environment. Should the opposition win, Orbán is ready to use both the “shadow state” and the immense financial resources accumulated by his cronies to destabilize – and possibly debilitate – the new government. (It was largely due to this “shadow state” that the OSCE characterized Hungary’s 2018 parliamentary elections as unfair.)

This spells considerable problems for the European Union. Indeed, in the run up to the elections, the EU has already had to reckon with an increasingly obstructive Hungarian policy, including more and more vetoes in matters related to foreign policy. Orbán needs this conflict for domestic political purposes. He will continue to use the “besieged fortress” narrative to keep his camp of supporters together and will present criticism from the EU as foreign interference in Hungary’s elections. Bracing for tough conflicts with the European Commission over the rule of law mechanism and European Reconstruction Fund, the Hungarian government can rely on its spoiler strategy.

The Specter of Foreign Interference

The actions of Russia and China could also possibly shape Hungary’s upcoming elections. Although Moscow and Beijing generally do not play a role in the elections of small Central European countries, Hungary could be an exception. The Orbán government has long been supportive to the regimes of both countries and has become a key spoiler in favor of them in the EU. Moreover, Orbán agreed to two massive strategic investments that were financed from Russian and Chinese loans respectively, namely the extension of the Paks Nuclear Power Plant and the Belgrade-Budapest railway line. Not accidentally, an oligarch closely affiliated to Orbán is the largest Hungarian subcontractor in both projects.

Should the opposition coalition win, the new government is likely to try to reassess – and possibly cancel – both projects. Hence, Orbán’s victory is in the best interest of Moscow and Beijing, both politically and economically. Although it remains to be seen whether and to what extent either will decide to influence the election process, the aforementioned hacking attacks that were left practically unanswered by the Hungarian authorities are a warning sign. While open political support of Orbán from Moscow or Beijing would probably be counterproductive, covert actions, such as hacking, may well be in the cards. Should any such interference in favor of Orbán lead to his victory, it would mean that the prime minister of an EU and NATO country would be seriously indebted to a foreign power.

Given his use of conflict with the West to deflect from domestic problems, Orbán could benefit from accusing Berlin of interfering in Hungarian elections should the new German government comment on the current election campaign. Nevertheless, Berlin needs to tough it out. While maintaining pragmatic relations with the Hungarian government, which is in the best interests of German business, Berlin also needs to establish well-functioning channels with the opposition, particularly with Péter Márki-Zay. In addition, since free and fair Hungarian elections are of crucial importance for the European and international order, Germany should also consider the idea of a robust OSCE election observation mission. Such a mission could tackle questions about the legitimacy of the results and the risk of post-election instability. 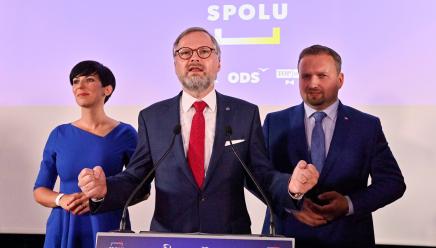 Czechs and Balances After Surprising Elections