Ukraine’s energy infrastructure is suffering structural damage and Russian attacks are likely to continue. But the morale of the population is unlikely to break.

Russia keeps systematically bombing Ukraine’s civilian critical infrastructure, most importantly its power plants as well as the electricity and heating networks. Air and missiles strikes and attacks by Iranian-made drones have been occurring almost on a daily basis since October 10.

According to President Volodymyr Zelensky, Russian attacks have already damaged approximately 40 per cent of Ukraine’s energy infrastructure. Besides Kyiv, several large cities all over the country have been affected, including Cherkasy, Chernivtsi, Kharkiv, Lutsk, Odesa, and Rivne.

Nearly the whole country is targeted, with the Zakarpattya region the exception. The reason why it has been spared so far (apart for an electricity substation hit in May in order to hamper railway traffic) is unclear. Some say it is because Zakarpattya borders Hungary, Poland, Romania, and Slovakia, and Russia does not want to risk accidentally hitting the territory of a NATO country. Others argue that, as energy infrastructure is scarce in the region and its population is small, Russia has not had a reason to attack any targets here.

The attacks on transformers and electrical substations especially cause serious problems. They are mostly individually designed for given local circumstances and their replacement is costly and time-consuming. Besides, Ukraine’s energy sector has never encountered such extensive damages before: human resources are limited, spare parts are scarce, and working on the damaged grids is dangerous as new strikes may occur.

France, Germany, Lithuania, and nearly a dozen of other countries have promised help to restore the damaged energy infrastructure. The European Union’s Energy Commissioner Kadri Simson visited Kyiv on November 1 and promised EU-level help. Still, as the Russian attacks continue, Ukraine needs a lot more help and needs it quickly as winter is setting in.

By attacking electricity substations, Russia’s seems to aim to break up Ukraine’s energy system, so that one region could not help another anymore and differing loads on the system could not be balanced. A significant collateral damage is that, without electricity, the supply of water and heating also does not work.

The damage is so extensive in the Kyiv region, as well as in many other parts of the country, that the only way to keep the electricity network functional at least at a minimum level is to introduce rolling blackouts. Artificially reducing consumption helps balance the network and also makes maintenance easier.

The situation in Kyiv is so severe that Mayor Vitaly Klitschko has announced that there will be a thousand generator-powered “heating stations” set up throughout the capital, where inhabitants can find shelter if their homes are left without heating.

Russia’s strategy is blatant: to coerce Ukraine’s government to bow to it claims, including recognizing the illegal annexation of four regions by Moscow in early October. Former president Dmitry Medvedev has stated openly that, if Ukraine recognizes Russia’s claims, “Then the power supply situation will get better.”

Russia seems to have a steady supply of Iranian-made drones, even if its stockpiles of precision weapons are diminishing. Moreover, the attacks are highly likely to get worse once it receives Iranian-made ballistic missiles. These are much faster than the drones and cruise missiles Russia has used so far, and Ukraine’s air defense could do little to stop them. Air Force Spokesperson Yuriy Ihnat said on November 1 that, against the Iranian ballistic missiles, “we have no defense.”

However, despite all the suffering that lies ahead for Ukraine’s population, it is highly questionable whether the Russian strategy of bombing the country out of the war will work. Military history suggests that, however hard it is attacked by conventional means, it is unlikely that a suffering civilian population will force its government to surrender. In the Second World War, neither Nazi Germany’s Blitz against the United Kingdom, nor the mass bombings of German cities by Allied forces, nor the devastating US air strikes on Japanese cities led to any political changes. US attacks against Vietnam’s civilian population were also unsuccessful from this perspective.

Given the extremely high morale of the Ukrainian population—in the latest Rating Group polling 86 percent of respondents say that things are generally going into the right direction—it is more likely that the degradation of the energy infrastructure will result in a new migration wave toward places where winter can be survived, rather than in any kind of breakdown of willingness to fight. Ukraine and its population will suffer but they are highly likely to endure.

This DGAP online commentary was published on November 3, 2022. 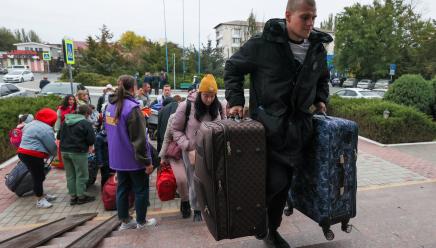