Although President Biden has made US foreign policy more predictable, its medium- and long-term direction and concomitant implications for transatlantic relations are less certain. This report presents three scenarios of how US strategy might evolve. They provide insight into how the United States behaves in the spheres of security and international economy under different conditions and why, suggesting ways for the EU and Germany to preemptively mitigate risks and positively influence future policy.

Below you will find the executive summary and introduction of this report. To read the paper in its entirety – including all info graphics, footnotes, and citations – please download the PDF here.

While the administration of US President Joe Biden is bringing back a more familiar and predictable approach to global affairs, the medium- and long-term outlook for US foreign policy remains much more uncertain. Any shift in US grand strategy over the next 15 years would have significant implications for transatlantic relations – particularly for Germany, which has deep security relations and high-value economic ties with the United States. In order to assess the potential implications of future policy shifts and the kinds of mitigation required from Germany, I have developed three broad scenarios of how US strategy might evolve in as early as the next five years that I present here: liberal internationalism, realism, and isolationism and protectionism.

So far, so familiar. Recently, there has been a rash of scenario reports on the future of the international order as well as transatlantic and transpacific relations. This surge of strategic foresight activity was presumably triggered by the shock of the Trump administration and the portent of 2020, resulting in scenarios that have tended to compete to test analysts’ cognitive biases and complacencies. They propose increasingly inventive versions of the world, often over an ambitious long-term horizon.

This paper is different. Rather than presenting highly engineered, narrative possibilities, it presents three scenarios that are quite classic, being iterations of three familiar US strategic modes:

This report is also somewhat different because it is not primarily about the scenarios themselves. Instead, I aim to offer three eventualities that are clearly differentiated along the familiar lines of various types of US grand strategy. In the liberal-internationalist scenario, US strategy is geared toward multilateralism, rules and institutions, economic cooperation, and the pursuit of economic welfare. In the realist scenario, US strategy is more focused on bilateralism, competition and conflict, power (rather than power-restraining institutions), and the pursuit of national security (rather than economic welfare). The isolationist and protectionist scenario presents yet another type of US strategy – one that is unilateral and inward-looking, turns away from international economic cooperation, and disentangles itself from “extra-hemispheric” security commitments.

For the sake of further clarity, this paper focuses on US strategy in just two fields: security and the international economy. In the liberal-internationalist scenario, the United States remains strongly committed to the existing system of transatlantic collective security. It also maintains broadly cooperative policies within the framework of the international economic regime established on the basis of multilateralism, non-discrimination, and reciprocity after the Second World War. In the realism scenario, Europe continues to benefit from US nuclear deterrence but is forced to take on greater responsibility for conventional deterrence. The United States resorts to geo-economic policies in the context of greater security competition. In the isolationist scenario, the United States pulls out of NATO and largely abandons its other overseas security commitments; international economic cooperation largely collapses.

This comparatively narrow focus allows us to generate clear implications from each scenario – particularly for German policy-makers: Given its dependence on US security cooperation and high-value economic relationship with both the United States and China, Germany would be almost uniquely negatively affected by a shift in US strategy away from today’s liberal internationalism toward realism or isolationism. Although the realist scenario is characterized by continued security cooperation between the United States and Europe, it also sees increasing geo-economic pressure being exerted on Germany by both the US and China. In the isolationist and protectionist scenario, the international system would initially be characterized by competition and conflict, leading to the reemergence of economic blocs and spheres of influence over time.

Lastly, we also focus here on the mechanics of how we generated the three scenarios – thus, more on how the United States makes its strategy rather than the strategy itself. We define strategy-making as the domestic political mediation of international ends and available domestic means. Therefore, each of the scenarios presented in this paper are constructed on the basis of three fundamentals:

We open up the black box of domestic politics and show which international shifts pull which domestic US levers and vice versa. As a result, we can better understand how the United States behaves under different conditions and why. This matters if German policy-makers are to preempt and influence future policy.

Germany needs Europe to think about ways to preemptively mitigate the potential adverse consequences in the security and economic sphere that arise in the two adverse US foreign policy scenarios. On the basis of my analysis, I have outlined potential risk mitigation strategies and policies. With the help of the concept of asymmetric interdependence, fundamental mitigation strategies are derived in view of the different scenarios that consist of:

Each strategy is characterized by different cost/benefit trade-offs.

A more detailed analysis of the three scenarios and related cost/benefit trade-offs will be provided in subsequent DGAP Policy Briefs. But what is already clear is that the friendly “continuity” scenario is the least likely – not least because it is the hardest for the EU to influence. The liberal-internationalist scenario is characterized by a benign security environment and international economic cooperation. Avoiding Sino-US great power competition is a necessary condition if this scenario is to materialize.

Strategic planning is to look ahead, not into the distant future, but beyond the vision of the operating officers caught in the smoke and crises of current battle; far enough ahead to see the emerging form of things to come and outline what should be done to meet or anticipate them. – Dean Acheson

In spite of total defeat in the Second World War, Germany and Japan “benefited by losing,” according to American historian John Dower. Germany did indeed benefit enormously from the international security and economic order created in its aftermath by the United States. NATO and the US military presence in Europe provided Germany with security and stability. The Bretton Woods System and the General Agreement on Tariffs and Trade (GATT) laid the foundation for stable international trade relations as well as monetary and financial cooperation. Due to its traditional export orientation, Germany was one of the main beneficiaries, mutating from a Machtstaat to a Handelsstaat. The rules-based multilateral economic and the transatlantic security order also enabled European economic and political integration. For seven decades now, Germany’s stability and prosperity has rested on the twin pillars of transatlantic cooperation and European integration.

The transatlantic pillar came under significant pressure during the administration of US President Donald Trump. Its so-called America First policy – semantically and ideologically harking back to the isolationism of the 1930s and early 1940s – not only weakened transatlantic cooperation, but at times also seemed to question its rationale altogether. The election of Joe Biden as Trump’s successor makes the further deterioration of transatlantic relations unlikely, at least in the near term. Nonetheless, the Trump administration may yet turn out to be the beginning of a more fundamental shift in US foreign policy.

The quarter-century that followed the end of the Cold War was marked by unipolarity and American dominance. The United States was without a doubt the military power in the international system. America could afford to involve itself in costly wars of choice in Afghanistan and Iraq without fundamentally jeopardizing its global position. While the United States remains militarily dominant, the rise of China is challenging the status quo in the economic and military realm, particularly in East Asia and the wider Indo-Pacific region. Due to its demographic weight, rapid economic development, growing technological capabilities, and increasingly global interests, China has the potential to seriously challenge the global dominance of the United States in the longer term.

Consequently, for the first time since the end of the Cold War, the United States is facing a potential peer competitor. The rise of China threatens America’s core strategic interests, raising the specter of a return to great power, even superpower competition and rivalry. This is bound to have a significant impact on transatlantic – and especially German-American – relations.

This report kicks off DGAP’s research project “How Can Germany Better Deal with US Foreign Policy and Its Consequences Moving Forward? Changes, Scenarios, and Strategies for German Decision-Makers,” a new, multi-year endeavor funded by the Friede Springer Foundation that seeks to analyze the future of US foreign policy and evaluate its potential implications for transatlantic relations. This research project does not seek to predict the medium-term development of US foreign policy with any degree of accuracy. As the philosopher and baseball player Yogi Berra once said: “It’s tough to make predictions; especially about the future.” Instead, it constructs and analyzes plausible medium-term scenarios that strive to stimulate a broader discussion of the strategic options and choices faced by Europe and Germany in light of the shifting international balance of power. Follow-up studies in the context of the research project will develop more detailed proposals on how German and European policy-makers can successfully confront the risks or capitalize on the opportunities arising from a potential shift in US foreign policy. The project will also engage in the systematic monitoring of US foreign policy. Such monitoring is not only meant to inform policy-makers and business leaders about events and trends in a timely manner, but it will also help refine – and, if necessary, adjust – our medium-term scenarios in light of real-world developments.

In this report, we look at three major scenarios for the future of US foreign policy:

First, we explain the tool of scenario analysis. Second, we consider the three principal drivers that underpin our three scenarios, namely the international system, domestic politics, and economic resources. Third, in order to create as much transparency as possible with respect to the logic driving the individual scenarios, we describe the conceptual framework that we used to construct them. Fourth, we assess all three scenarios. Lastly, we outline the fundamental options and strategic choices Europe and Germany will face under each one. Policy recommendations focus on the key policy areas of security and economic relations. Follow-up papers from this research project will deal other important policy areas such as technology, energy, climate, etc.

This report is part of a project on US foreign policy and its implications for Germany, funded by the Friede Springer Stiftung. 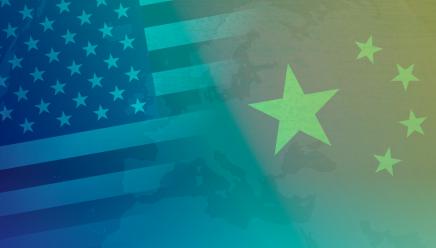