The Biden administration is considering an important change in US security policy: declaring the sole purpose of nuclear weapons to be the deterrence of a nuclear attack. If adopted, however, this policy could raise doubts among allies and undermine NATO cohesion. To reassure allies and prevent adversaries from exploiting the shift, NATO needs to act quickly to address three main issues over nuclear policy.

While all nuclear-armed states across the world are modernizing and some building up their nuclear arsenals, the Biden Administration has committed itself to limiting the role of nuclear weapons in US security policy as laid out in its Interim National Security Guidance. How this goal will be realized is still unclear. Nevertheless, President Joe Biden is considering a highly significant step: a unilateral adoption of a ‘sole purpose policy’ – a political declaration pledging to limit the purpose of US nuclear weapons “to deter - and, if necessary, retaliate against - nuclear attacks.”

Any such step would fundamentally alter the perception of the United States and its nuclear commitments in the eyes of its adversaries – and of its allies. It could have far-reaching consequences. A sole purpose declaration is likely to meet with considerable resistance domestically and from within NATO, given the growing role of nuclear weapons in today's security environment.

The objective of a sole purpose policy is to lessen the risk of an unintentional nuclear exchange.

A sole purpose declaration has been considered – and rejected – before. Both Obama administrations endeavored to limit the role of nuclear weapons and called for the adoption of a sole purpose policy. However, both times, there was strong push-back from parts of the defense community which believes that such a declaration would undermine the US deterrence posture and unsettle allies. In the end, President Barack Obama refrained from adopting a sole purpose policy.

Yet, Biden did not give up on the idea. As presidential candidate, he wrote in March 2020:

“I will take other steps to demonstrate our commitment to reducing the role of nuclear weapons. As I said in 2017, I believe that the sole purpose of the U.S. nuclear arsenal should be deterring—and, if necessary, retaliating against—a nuclear attack. As president, I will work to put that belief into practice, in consultation with the U.S. military and U.S. allies.”

The exact wording of a sole purpose declaration is crucial. Biden’s reference to retaliation of attack means that the purpose of US nuclear weapons would be limited to a single concrete scenario of military employment. This effectively brings the United States close to a No-First-Use policy, which precludes the option of being the first to employ nuclear weapons in a conflict. Other versions of a sole purpose declaration could allow for more flexibility.

Up to now, US nuclear policy is built on the principle of strategic ambiguity. The aim is to leave adversaries guessing about the conditions under which America would use nuclear weapons. This ambiguity applies in particular to the question whether the United States might use nuclear weapons in response to attacks involving non-nuclear means such as biological, chemical, or conventional weapons. The goal is to convince the adversary to refrain from any kind of severe attack for fear of suffering unacceptable consequences.

A sole purpose policy has the opposite intention: It aims to increase predictability for adversaries so as to minimize the danger of misperceptions and miscalculations on their part. The objective is to lessen the risk of an unintentional nuclear exchange.

For America’s allies, however, such a policy would raise complicated questions.

Should the US adopt a sole purpose policy, it would confront NATO allies with at least three major issues: First, NATO would have to revise its own deterrence strategy towards non-nuclear threats (the so-called cross-domain deterrence); second, NATO would be pressed to reopen the debate about nuclear sharing, as the role of US nuclear weapons on European soil would be reduced; and third, the alliance would have to find other ways to bolster its cohesion as interests and assumptions pertaining to US nuclear strategy unravel.

The Issue of Cross-Domain Deterrence

Nuclear weapons play a vital role in NATO’s deterrence posture. The Western alliance has never ruled out the option of using nuclear weapons first – a strategy going back to the Cold War, when the threat of a deliberate escalation with nuclear weapons was meant to deter or halt large-scale conventional attacks.

In recent years, the role of nuclear weapons has expanded as NATO has tried to deter the growing range of threats from non-nuclear sources including cyber-attacks. NATO reserves the right to use nuclear weapons across all operational domains, “should the fundamental security of any NATO ally be threatened.” Other nuclear-armed states, such as Russia, have similar deterrence postures and purposely remain ambiguous about any possible use of nuclear weapons to deter attacks across all domains.

US nuclear forces are the foundation of NATO’s cross-domain deterrent. Consequently, if the United States were to limit the purpose of its nuclear weapons to deterring nuclear attacks, NATO’s ability to deter non-nuclear attacks would be curtailed. Sole purpose proponents reject this idea and point out that threatening the use of nuclear weapons to retaliate against cyber operations already holds little credibility for adversaries. Critics, however, argue that substituting the nuclear element in cross-domain deterrence is effectively impossible since no other capability comes close to the destructive power and thus the deterrence effect of nuclear weapons.

Uncertainty Over Nuclear Sharing in Europe

Most recently, members of the Social Democratic Party in Germany questioned the country’s participation in NATO’s nuclear sharing arrangement following the decision to replace the country’s aging Tornado aircraft fleet last year. The Green party has consistently called for a withdrawal of US nuclear weapons from Germany. Similar debates also exist in other host countries like Belgium and the Netherlands, where voters view the presence of US sub-strategic nuclear weapons skeptically.

If the United States limited the use of nuclear weapons to responding to an adversary’s nuclear attack, the broader deterrence purpose of nuclear sharing arrangements would be called into question. Allies would have to consider how this would affect the usefulness of forward-deployed sub-strategic nuclear weapons. Most certainly, critics of nuclear sharing would see themselves vindicated and would increase their calls for the withdrawal of these weapons.

Most problematically, disagreements on such fundamental issues as the role of nuclear weapons or the logic of deterrence could threaten NATO cohesion. If Washington adopted a sole purpose policy, the result would not be concerted opposition but increasing fragmentation among allies. Eastern European countries would raise serious concerns, while others like Canada, Spain, or the Netherlands might actually welcome limiting the role of nuclear weapons.

Major resistance should be expected from the other two nuclear powers in NATO: France and the United Kingdom, who contribute their independent nuclear forces to NATO’s general deterrence posture. Neither country is likely to adjust their own strategies in line with Washington and reduce the role of their nuclear weapons. Indeed, Britain recently announced it will increase the cap on its nuclear warheads and no longer publish their operational or deployed numbers.

But while neither Paris nor London wishes to limit its own use of nuclear weapons, neither will be willing or able to replace US commitments to the Alliance, should Washington reduce the role of its nuclear weapons for European cross-domain deterrence.

Adversaries might perceive the dissent on nuclear issues as an opportunity to further undermine and decouple Allies. Mutual trust, political, and military commitment are the cornerstone of credible military posture, military readiness, and effective deterrence.

Need for an Internal Dialogue

Issues of nuclear deterrence touch on NATO’s very essence. Commitments to mutual defense and extended deterrence represent the cornerstone of the Alliance. Decisions that potentially affect those commitments cannot be taken unilaterally but require close consultations with allies. Joe Biden, when he was running for president, made the promise to consult America’s allies on the issue of a sole purpose declaration. NATO members should take him up on that promise. Allies need to engage in an internal strategic dialogue to determine how NATO can reconcile changes in US declaratory policy with maintaining cohesion and ensuring the credibility of its deterrence and defense posture in an increasingly hostile security environment. Early on, NATO member states should:

This online commentary was published in May 2021. 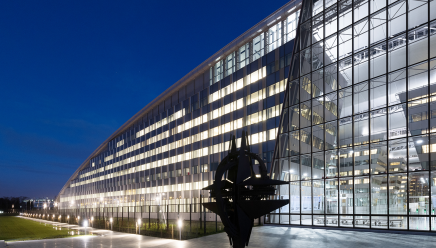